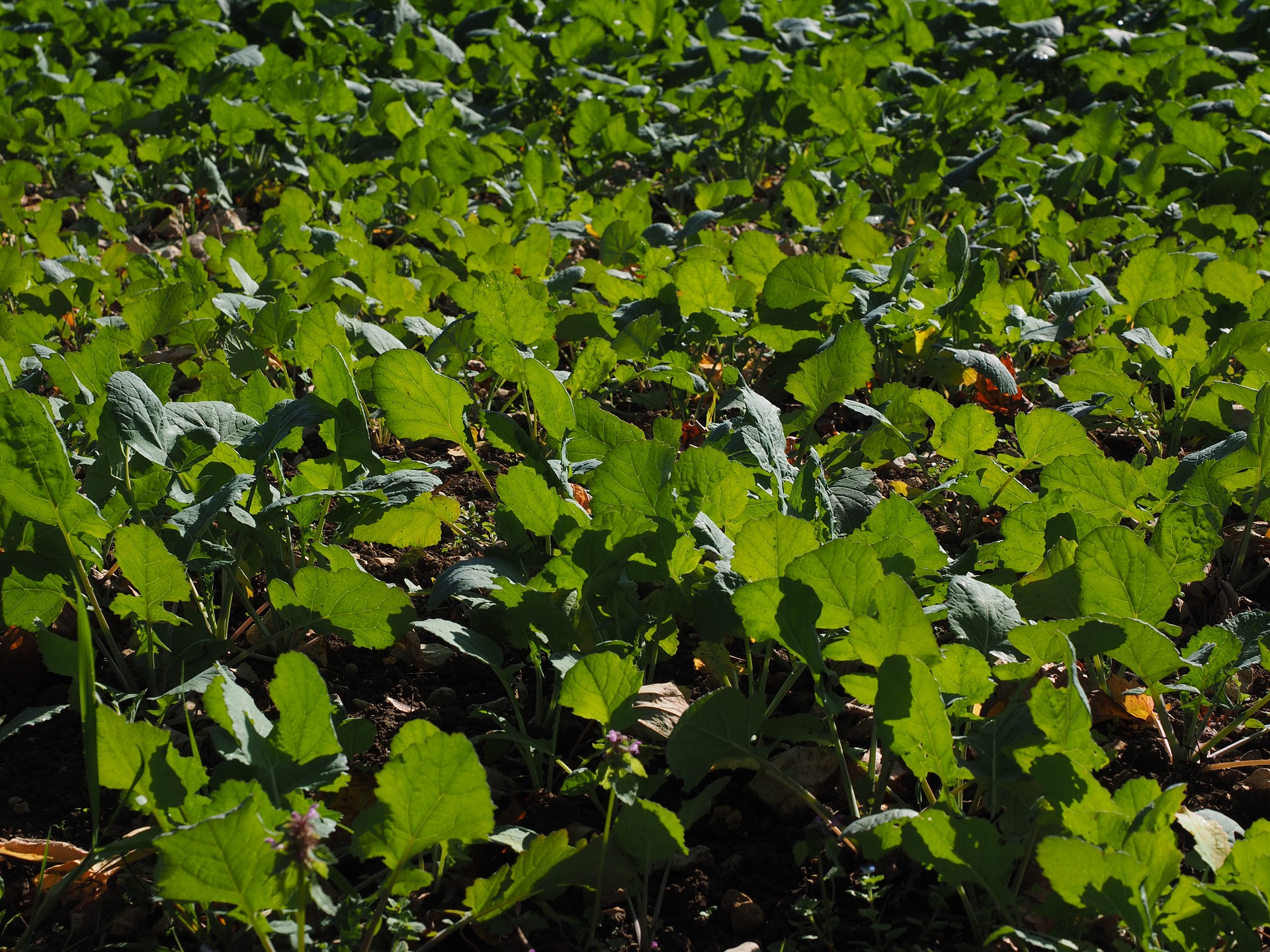 Green manure is a reliable, organic, cost-effective method for improving the fertility and general condition of your soil. This form of permaculture is particularly useful if you want to grow vegetables, fruits, or herbs. It’s suitable for use in large orchards or on small raised beds, and also attracts beneficial pollinators to your garden while repelling destructive pests. Read on to learn how to incorporate it into your own garden plans!

What is Green Manure?

The terms “green manure” and “cover crops” are often used interchangeably, but there is a difference between them.

Cover crops are plants grown specifically to improve soil fertility and structure. They can also insulate the soil, keeping it warm in winter and cool in summer. Fast-growing cover crops such as buckwheat are also effective smother crops, which prevent weed growth. Grains and legumes like clovers and flowering cover crops can also encourage beneficial insects and pollinators to visit your garden.

Green manure is created when these cover crops are cut down and turned into the soil. As the crops break down, they improve soil nutrient levels. The process also adds organic matter to the soil, and attracts earthworms and other beneficial soil-dwelling organisms.

How Will it Benefit My Garden?

As we’ve already noted, green manure is a great way of improving your soil’s overall health. Many grasses and grains prevent soil erosion, so nutrients like calcium and nitrogen won’t be easily washed away. By cutting down and turning in these crops, we can restore vital nutrients to the soil.

Similarly, legumes like alfalfa and clover are capable of taking nitrogen from the air and fixing it in the soil, where bacteria turns it into a more plant-friendly form. This makes the earth more fertile, and your crops healthier in turn.

How to Create Green Manure

There are a few factors to consider before you begin.
Firstly, the location of your garden will affect what you sow or plant. As with all types of gardening, certain crops do better in some locations than others.

You’ll also need to decide whether you want to grow annual or perennial crops. Annual crops are generally quicker to grow and establish themselves. They will last for a single season and won’t return unless you re-sow or re-plant them.

Different cover crops will benefit the soil in different ways. For example, if your soil is lacking in nitrogen, then clover or legumes will have the most impact. Alternatively if you want to add more organic matter to your soil, then a selection of grasses or grains will be more beneficial.

There are 2 types of green manure to choose from: legumes, and grasses/grains.

Legumes will increase nitrogen levels in the soil as well as adding organic matter. They’re quick to decompose, but can be slow to germinate and grow. For this reason, they’re best sown in the fall. They can then be cut just as they’re about to flower, and then tilled under.

The most common legume cover crops include:

Tropical Legumes thrive in warm conditions. Gardeners in a cold or cooler climates will have little success with this crop unless it is grown as a summer annual.

Plants known as tropical legumes include:

Clovers, such as berseem clover, Dutch white clover and crimson clover, are also excellent cover crops. They’re more shade tolerant than other legumes, and their flowers will attract pollinators to the garden.

Legumes are best cut back before they flower and their stems become woody. Some, such as alfalfa will need to be cut back twice a year. This encourages fresh growth and prevents them from becoming too unmanageable.

Grasses and grains are quicker to germinate and establish themselves than legumes, and are an effective form of ground cover. They add more organic matter to the soil, but are slower to decompose than legumes.

As well as improving the condition of the soil, grasses and grains can loosen compacted areas to control soil erosion. Additionally, they can tolerate shady, colder and drought conditions. Many also seem to reduce the number of nematodes in the soil.

The most commonly used forms of grasses and grains are:

Although they’re not traditionally considered cover crops, other plants can also add organic matter and improve soil condition. Many of these will also attract pollinators and repel unwanted garden dwellers such as nematodes.

These are crops such as:

Gardeners with acidic soils will enjoy better results by planting vetches, clovers, and buckwheat. Similarly, Sudan grass, rye grass, barley, and alfalfa will all do better in alkaline soil.

If you’re unsure which cover crops will best suit your garden, try growing a variety of them. If sown together, faster-growing crops will act as a nurse crop. This is a form of companion planting that sees fast-growing plants sustaining and supporting slower-growing crops.

This approach means that you may have to cut and turn the cover crop more than once a year. However, this is a reliable method of improving your soil over an extended period.

When to Plant Cover Crops

When you sow will largely depend on what you’re growing, and where you live. In colder climates, you can sow fall and winter crops as early as August. In warmer areas, you may have to wait until late November before you can sow.

Similarly, you can plant frost-tolerant crops such as bell beans or oats in springtime, as soon as the soil is workable. Other crops, like buckwheat, will have to wait until the chance of frost has passed. Spring or summer cover crops are less disruptive. They can be incorporated into your general planting scheme, growing between rows or below established vegetables.

If you choose to sow a variety of cover crops, stagger your planting throughout the year. This continuous cover will protect your soil from erosion while constantly adding nutrients.

How to Plant Cover Crops

Clear the area of weeds, unwanted flowers, and spent vegetables. Then rake the soil, breaking up any compacted clumps of earth. The soil is now ready for you to sow your chosen seeds.

The amount you sow will vary depending on the size of the area and the type of crops you are growing. A general rule of thumb is to sow one and a half cups of seed per 100 square foot. If you’re unsure how much to sow, or the best time to do so, consult a cover crop planting chart.

Rake the soil over or cover the seeds with additional soil to a depth of roughly three times the seed’s diameter. Water the seeds in once they’re covered. Keep the soil moist over the next few weeks as the seeds germinate.  Covering the area with compost, cut flowers and excess vegetables will help to create a denser cover, and will also speed up germination.

Some people like to apply a dose of organic, nitrogen-rich fertilizer to the site. This isn’t necessary, but doing so will speed up germination and encourage the crops to grow.

Apart from watering, don’t disturb the crops again until they’re about 4 inches tall.

Turning in Your Cover Crops

You can turn in cover crops at any time. The best time for legumes is just as they are about to flower. Turn in grasses or grains when the grain heads begin to form. At this point the plants are at their most nutritious.

Before turning in, cut taller crops down to a more manageable size. You can compost the tops or turn them in along with the remaining stubble. Turning in is simply the process of mixing the cut down cover crops with the soil with a fork or spade.

After turning in the cover crops, wait for a couple of weeks before planting in the soil. This allows the soil’s organisms and microbes to break down, or at least begin breaking down, the plant material and start converting it into nutrients.

Speeding up the Process

Add a layer of organic mulch to the soil to help the crops break down more quickly. The mulch will also help the soil retain moisture, and encourage beneficial creatures such as worms to the area. Alternatively, covering the area with a piece of black plastic will also help to speed up the process.

After a couple of weeks most of the crops will have broken down into green manure. Turn the soil over with a fork or spade to fully mix the green manure in. The soil is now ready for planting.