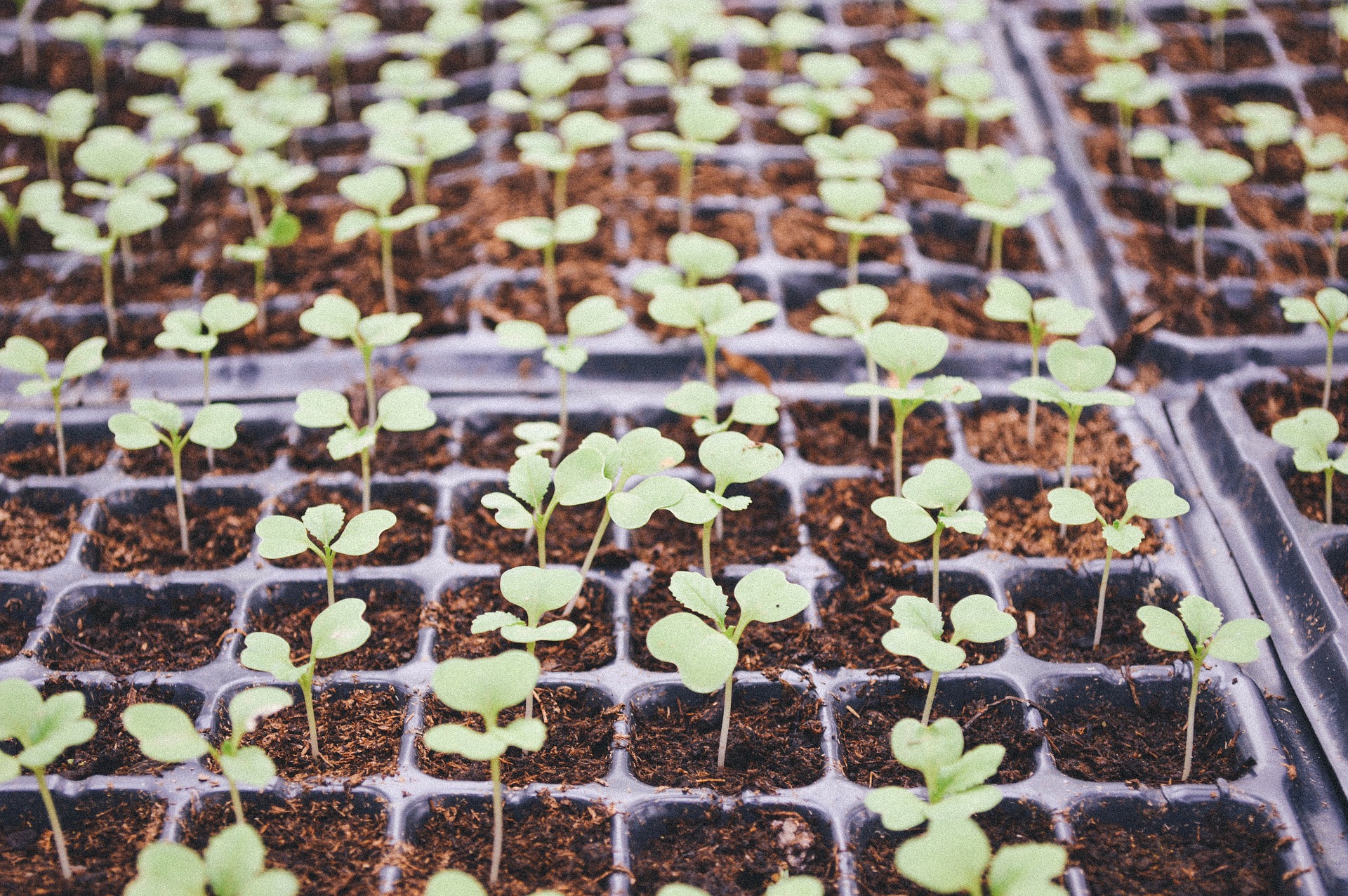 Have you ever started a bunch of seeds, been excited to see them grow, and then been heartbroken when they’ve died off for no apparent reason? They might have suffered from damping off disease. Read on to learn what causes this, how to treat it, and prevent it from obliterating your crops in the future.

I start my seeds early in the spring, when the snow is still piled in heaps around my little house. They grow in a miniature, indoor greenhouse to protect them from the chilly nights. But some years, the spring comes later than it should. I plant my seeds in the false spring, and when cold and snow linger longer than expected, my seedlings wither and die.

Despite all my efforts, the sickness spreads: no amount of watering or sunlight seems to help them. For a long time, I had no idea what caused this mysterious, wasting disease. I blamed myself for under-watering or under-fertilizing.

But after losing 15 pumpkin seedlings one spring, I knew it was more than just neglect on my part. After all, I’d tended these pumpkins carefully. What happened? I started researching the symptoms. What I’d thought was too much sunlight, or not enough water what something much worse: damping off disease.

What is Damping Off Disease?

Damping off disease is a cool-weather condition that kills seedlings (or seeds) early in life. Seeds and seedlings are attacked by several different, fungal pathogens in the soil, either before or after they germinate. As a result, the seedlings weaken, wither, and eventually die.

While many of the symptoms of damping off disease make it look as though your plants are scorched and dry, the disease’s causes are just the opposite.

Damping off disease happens most often in cool, damp conditions. For example, when the weather is barely warm enough to sprout seedlings and the hours of sunlight are often cloudy and gray. Early spring provides the perfect environment for damping off. Once the pathogens begin attacking one seedling, it’s only a matter of time before the whole flat of seeds is affected.

Damping off disease is caused by a variety of pathogens, so the symptoms you might see are varied. Consistent issues include rotted roots and withered leaves. A symptom called “wire-stem”, where the stems of seedlings become thin and tough, is also common.

One of the most common symptoms of damping off is the appearance of stem lesions right above the soil line. Occasionally a gray mold will develop on leaves and stems, and leaves spot and shrivel up. As the symptoms progress, your little plants are less and less likely to survive.

Even with early intervention, losses are high. You best chance of fighting damping off disease is to prevent it entirely.

What Causes Damping Off (And How to Prevent it!)

Fungus spores are everywhere, lurking and waiting to attack your plants. These spores are the root cause of damping off disease. When your seedlings are growing in damp or cool conditions, fungal pathogens have the environment they need to live and thrive. But since you want seedlings, not fungi, we need to focus on destroying spores and nurturing plants.

Spores travel through the air, so they can spread quickly without contact. As a result, once damping off disease starts among your seedlings, it’s hard to stop. After the spores settle into your soil, the disease progresses rapidly from plant to plant, seed tray to seed tray.

Spores like cool, still, damp air. The more sunlight and circulation you can introduce into your seedling room, the less chance spores have of surviving and thriving. Since seedlings are fragile, keep the air circulation gentle: a soft fan is ideal.

It also helps to keep your seedlings thinned out. Tightly seeded trays don’t allow as much air to move between plants. Close quarters in the seed tray allow the fungus to spread more quickly than usual.

Since fungus spores love cool, damp environments, one of the best ways to prevent damping off is by providing plenty of sunlight. This light is hard to find in early spring, when many of us are starting our seeds, but it’s essential for healthy seedlings.

If your spring weather is gray and gloomy, set up some grow lights to keep the spores away. Making sure your plants have sufficient light helps them grow strong quickly. It dries the air and soil quickly and gives fungus spores no place to settle.

Avoid overwatering your seedlings. I know, seedling get thirsty, and it’s important to keep them well hydrated. But remember to let the soil dry out between watering. Don’t water your seedlings every day unless it’s actually that dry in your house! Check the soil and wait to water until it feels more dry than damp.

It’s also a good idea to avoid using those seed tray covers as well. While they do provide a bit of a ‘mini-greenhouse’ effect, they also create a very humid atmosphere. If you’ve used them, you know what I mean. Moisture is trapped in the seed trays, keeping the plants damp. It’s an ideal dampening off environment.

Fertilizer is a huge factor in defeating damping off disease. Avoid fertilizing your young seedlings, especially if the soil is already high in nitrogen. You may think, as I did, that a boost of nitrogen will help your seedlings grow stronger faster. Unfortunately, nitrogen in your fertilizer helps disease grow and spread faster than usual.

Choose a good, healthy potting soil and avoid fertilizing your seedlings until after you’ve transplanted them. Don’t waste money feeding damping off disease with nitrogen-rich fertilizers.

If you do want to give your seedlings a little boost, something with potassium is a better choice. Potassium helps plants fight off disease. Try mixing a tiny bit of fireplace ash into the top layer of soil. The ashes will provide your seedlings with a bit of potassium and deprive fungus spores of hospitable soil.

Fighting Damning Off Disease Before it Starts

For some of us, spring weather and chilly houses make defeating dampening off disease an uphill battle. But there are a few tricks that can help you win the war.

Wise gardeners sometimes soak seeds in garlic water before planting. Add two sliced or crushed garlic cloves to a bowl of water and let your seeds soak in it for up to 12 hours before planting. Garlic is a powerful anti-fungal, so it’ll help keep your seeds safe from the spores that cause dampening off disease.

You can also water your seedlings with the same garlic water. In fact, adding a bit of garlic to your plant water will keep the soil and seedlings hostile towards fungal invaders.

In worst case scenarios – when you notice dampening off disease starting to destroy your seedlings, try applying a tiny amount of garlic tincture or oil directly to the soil. Spray a small amount around the base of each plant. It may help stop the spread of the disease.

Other anti-fungal plants like oregano and cinnamon can be used as you’d use garlic. I find a combination of oregano and garlic to be very effective against fungi no matter what environmental causes are encouraging it to spread.

Try mixing dried oregano with wood ash and mixing a small amount into the top layer of potting soil.

Known for it’s ability to heal the plants around it, chamomile can help deter damping off disease as well. Try misting your plants with chamomile tea to repel fungal spores. Because it’s one of the most gentle anti-fungals in the world, you can use chamomile on even the smallest seedling.

If you have an adult chamomile plant or two, try setting them around, and in between seed trays as well. It’s an ideal companion plant ,and just growing it beside seedlings will help your baby plants.

Mix 1 tsp of hydrogen peroxide with 2 cups of water and use this solution to water your plants. The peroxide oxygenates the soil, which kills fungus spores instantly! It’s a great way to fight damping off, especially for those of us who can’t seem to shake the damp chill air.

Damping off disease is a serious problem for so many gardeners. When you’re ready to start seedlings in the spring, don’t let your gardening future and all your hopes for summertime abundance waste away. Fight damping off disease before it starts by creating a growing environment where fungus spores can’t survive.

With plenty of sunlight, fresh air, balanced soil, and adequate moisture, your plants will have the best chance to grow and thrive.

If those spring showers blot out the sun for too long though, use one or two of these natural anti-fungal remedies to keep damping off from destroying your seedlings. If you’re used to planting extra seed to accommodate your losses, watch out. You’ll be amazed (and possibly a little overwhelmed) by just how many of your seedlings become healthy, productive plants.