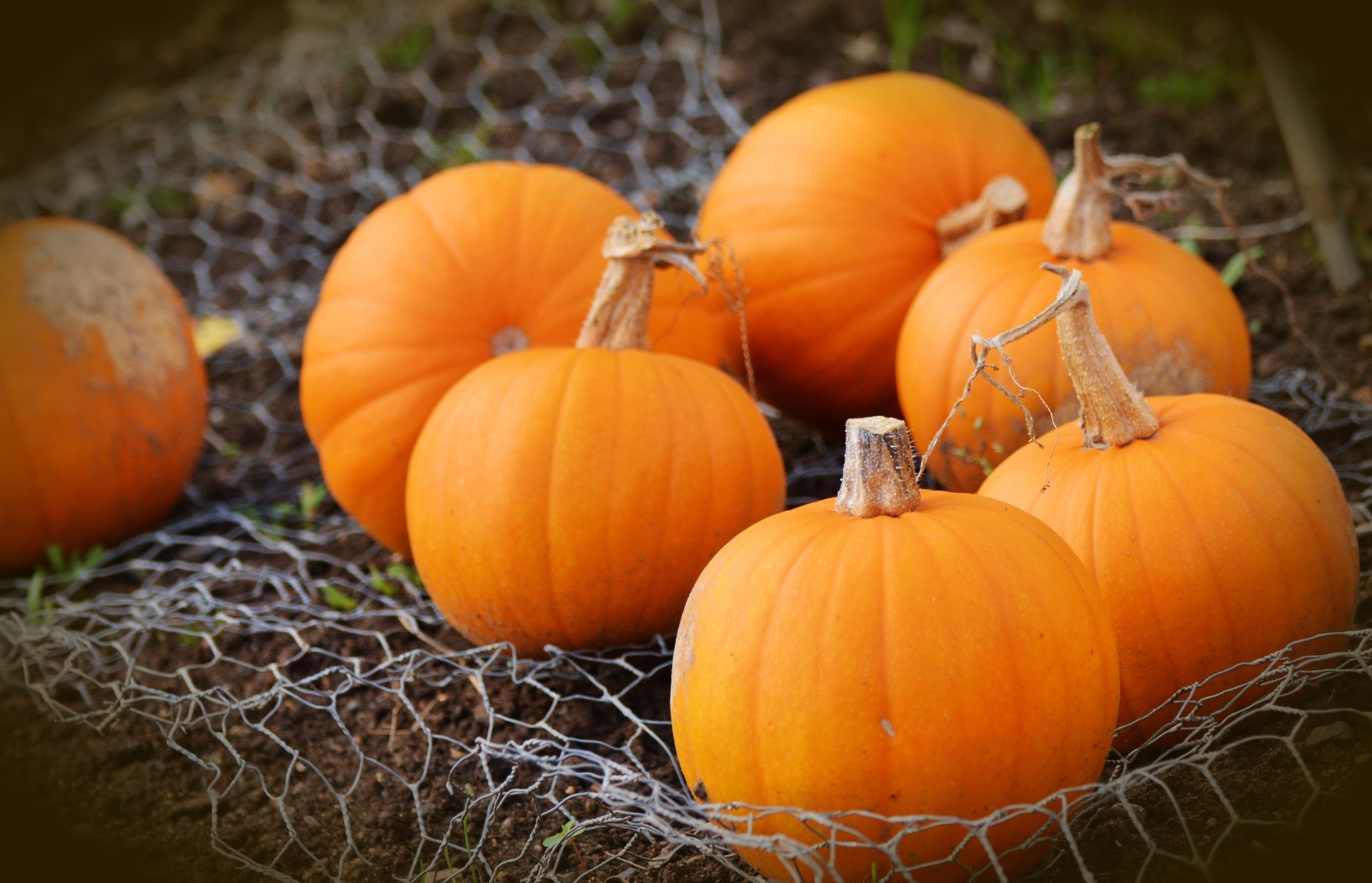 There’s nothing more cheerful than an autumn garden filled with bright, orange pumpkins. Autumn provides abundant opportunities for making pies, breads, soups, and sauces. But once pumpkin season is past, what then? How can you enjoy this wonderful product without letting any go to waste? Read on to learn how to preserve a pumpkin so you can enjoy its gorgeous flavor at any time of year.

There are a lot of options when it comes to storing pumpkins long term. Like other winter squashes, pumpkins have a hardy shelf life. Even without any effort on your part, a healthy pumpkin will sit on the counter for 8-12 weeks without rotting. Now, consider that preserving the pumpkin could add  6-12 months to that storage life. If you’re tired of eating pumpkin in October, put some by to brighten the February table.

The winter squash family, to which pumpkins belong, includes a variety of thick-skinned, hard-fleshed fruits with long growing seasons. Butternut, acorn, and kabocha squashes can all be preserved in similar ways.

These fruits have been grown in northern climates for generations because of their ability to produce well into the fall. Their long shelf life and easy processing is another reason northern gardeners love pumpkins. When we’re locked in another long winter of ice and snow, our pumpkins are still healthy and orange in the root cellar.

Pumpkins are one of these most popular squashes in cultivation. They’re abundant in nutrients as well, making them an essential for winter preserving. Rich in vitamins and antioxidants, they can help you have a healthy flu season. They also add a much-needed boost of bright color to heavy winter dishes.

So how do you ensure ready access to pumpkin all year long? There are a number of ways, and I recommend trying a few at a time. Store the best pumpkins whole and chop up the less perfect specimens for more intense processing.  The more pumpkin options you have in January, the more likely you are to actually eat the pumpkin you’ve put by.

If you’ve picked healthy, ripe pumpkins they can last anywhere from 8 to 12 weeks before starting to go bad. To convince your pumpkins to stick around longer, cure them first, then set them in a cool, dry, dark place. The curing process, followed by careful storage, can preserve whole pumpkins for months at a time.

Curing is actually a very simple process. After harvesting, choose your healthiest pumpkins. Any squash with bruises, deep nicks, or signs of rot shouldn’t be cured. Process these right away for canning or freezing.

Now, let all the perfect pumpkins air out in a warm, well-ventilated place for about 10-14 days. The temperature should be around 70-85 degrees, with low humidity. I like to set my pumpkins on a shelf about 6 feet from the wood stove while they cure.

This 10-day heat bath lets the outer shell dry and harden, which protects the fruit within. It’s as simple as that. After curing, carry your pumpkins to cooler storage.

Root cellars are perfect for pumpkins, but beware of storing them in cool, damp basements. Damp air will rot your harvest. If your cellar tends toward dampness, try a cool closest or pantry instead, away from a heat source.

Small, cured pumpkins can be tucked into a basket with dry hay, straw, or sawdust between them. This helps absorb moisture and keeps the pumpkins from touching each other. A bit of space between pumpkins allows for airflow, and protects against rot.

Start with a thick layer of dry packing material. Straw and hay are ideal. Sawdust is a great option as well, though it doesn’t allow for as much airflow.

Arrange pumpkins on the bottom layer of straw. Make sure to leave plenty of space between the fruit. Then cover this layer of pumpkins with your packing material and repeat. When you have a basket full of straw and pumpkins, cover the top layer with a thin blanket of straw, and tuck the basket into a cool, dark, dry corner of the pantry.

You’ll have delicious produce for up to 6 months!

If you have only a few pumpkins to store, they can be cured and shelved in a cool pantry with ease. Just pick a dimly lit shelf and be sure to keep some space between your pumpkins.

Storing your cured pumpkins on the pantry shelf won’t extend their life as long as layered storage. A shelved pumpkin can be expected to last at least 3 months, with some lasting up to 5.

Pumpkins that aren’t healthy enough to be cured and stored whole can be processed immediately after harvest. Processed items can be stored for a year or more with ease.

How to Process Pumpkin

Preparing it for long term-preservation is simple. First, remove the skin. A pumpkin’s skin is tough and inedible: its purpose is preservation, not flavor.

Slice the pumpkin in half and scoop out the seeds. Remember that the seeds can be washed, seasoned, and roasted with just a drizzle of olive oil for a delicious snack. Or, save them for spring planting!

Cut the pumpkin into thirds or quarters and peel the skin with a sharp knife. Then, chop the pumpkin into cubes. About 1-2 inch cubes are the easiest to work with. When the pumpkin is all cubed, you can do one of three things: steam, roast, or dry.

Steaming pumpkin is ideal if you’re planning to freeze the flesh for soups, stews, and sauces. Just keep in mind that it’s not the best method for pumpkin you’re planning to bake with. The steaming process adds in quite a lot of water, which will need to be strained out before baking.

Set the pumpkin in a large steam pot over boiling water. Cover, and let the steam cook the cubes for 10 minutes. Remove the steam pot from heat and allow the flesh to drain as it cools. If you’re planning to bake with steamed pumpkin in the future, put the cooked cubes in cheesecloth and gently press out the excess water.

Spread the cubed pumpkin on a baking sheet, drizzle lightly with olive oil, and bake for about 35 minutes at 375. Test with a fork for doneness. Cooked pumpkin will barely resist the fork, while under-cooked flesh will still be firm when tested.

Then, either pack your steamed and roasted pumpkin tightly into jars for pressure canning, or divide into 2-cup amounts and freeze in well-sealed bags.

A Note on Canning:

Pumpkin can only be safely processed in a pressure canner, unless you mix it in with significantly acidic foods. Process packed pint jars of pumpkin at 10 pounds of pressure for 55 minutes. Quart jars should be processed for 90 minutes.

Pumpkin cubes can also be dried for long term storage. We string one inch cubes onto thin twine with a quilting needle and hang them about 4 feet above the wood stove for two weeks before sealing into clean, dry, half-gallon jars.

If you own a dehydrator, you can dry your cubes of pumpkin at 135 for about 30 hours. Then,  seal them into clean jars and store in the pantry. But not everyone has access to a dehydrator. You also spread your pumpkin (sliced thin) on a tray in the sun and allow it to dry for 2 days in full sunlight. Cover the pumpkin slices with netting to protect from animals, then seal and store.

Which Method is Best?

Variety is always going to make putting food by more interesting and applicable! Different methods work best for different purposes. Whole pumpkins are best if you’re not much of a planner. If you have no idea what you’re hoping to do with your pumpkins, cure them and let them be. You’ll figure it out later.

Do you know you’ll be making pumpkin soup a few times in the winter? Or do you prefer smoothies and sauces? Whether you can or freeze them, they’ll be ready to go with minimal effort.

If baking pumpkin breads and pies are your primary goals, try roasting and canning, or freezing. This process makes sure your pumpkin doesn’t get bogged down with additional water, and the flavor puts store-bought puree to shame.

Dried pumpkin is an ideal option for the daring baker. If you hope to bake your own pumpkin bagels or mix up a pumpkin latte, this can be ground into an easy-to-control “flour”. Mixed it into bread dough, frothed milk, cake batter, and cream sauces with minimal effect on the recipe’s chemistry of the recipe.

I also like to throw a handful or two of dried pumpkin into beef stew or vegetable pot pie for a flavorful, thickening effect.

Don’t worry about preserving too much. If pumpkin is still over-running your pantry a year later, you can always make gallons of pumpkin ice cream to give as gifts in October. Trust me, no-one will mind!