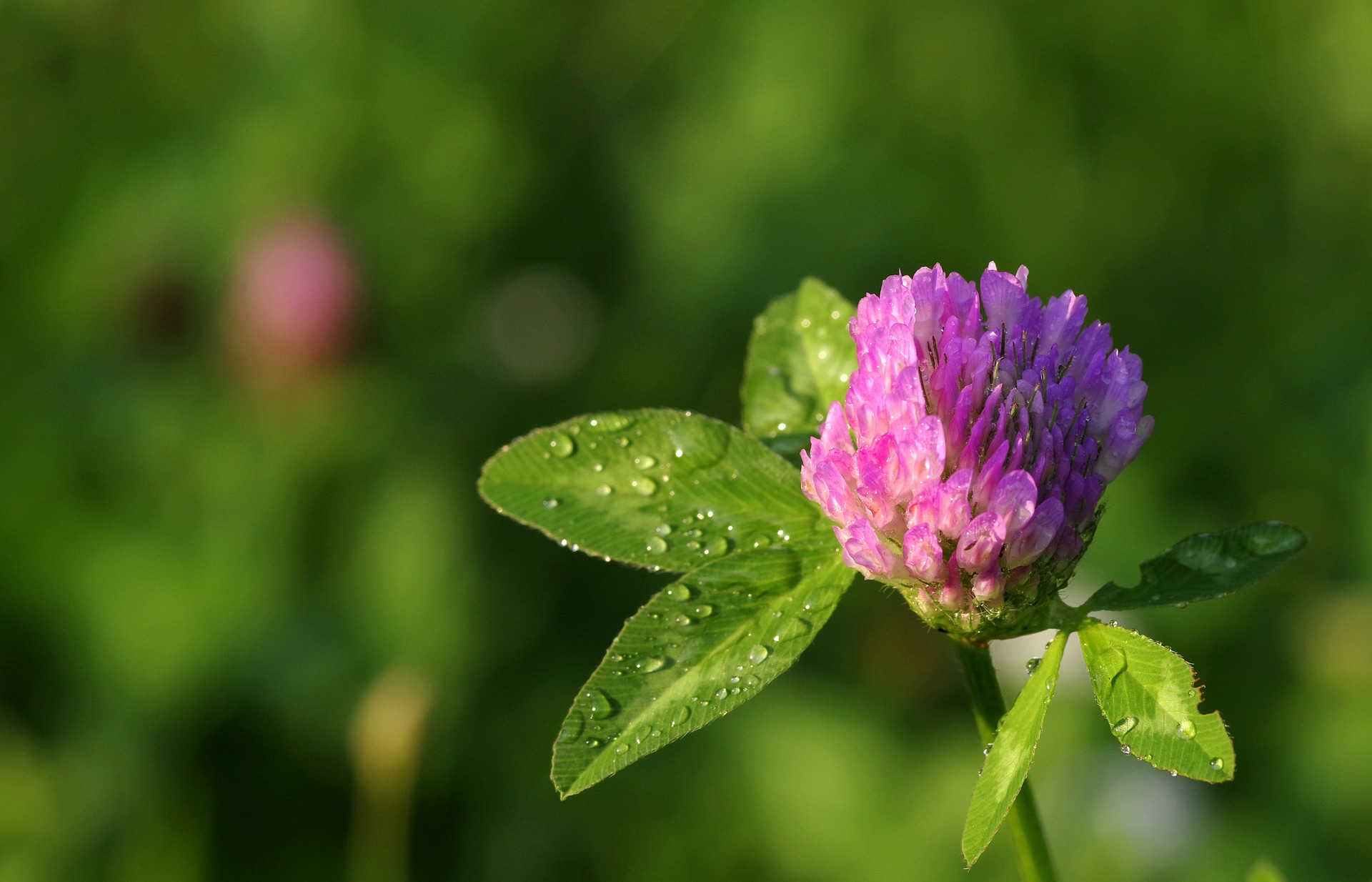 Out of all the cover crops that can be grown, there aren’t many that can multi-task as well as a red clover plant. This beautiful flower adds nitrogen into your soil, protects against erosion, and attracts pollinators. It’s also an excellent food for herbivores and has medicinal properties as well! Learn all about this amazing plant and why it’s so important to grow in your own garden.

The red clover plant is from the Trifolium genus, which means “3 leaf”. This family includes over 300 various flowering species, all of which are part of the legume family (fabaceae.) Having any member of this large plant family growing in your garden will greatly increase your soil’s health.

Red clover in particular (Trifolium pratense) is definitely my favorite garden cover crop. But why not white clover, arrowleaf clover, crimson clover, or any of the other varieties of the Trifolium family? By the end of this article, you’ll understand the love I have for this amazing little plant.

There are many benefits to growing red and/or white clover in your yard. Here are a few quick comparisons:

Both clovers are perennial legumes that are high in protein and fiber, making them excellent choices for grazing animals. Both are also nitrogen replenishers, so their presence will help your soil’s health..

Red clover has a shorter life cycle—usually about 2-3 years. It also doesn’t grow back as vigorously when constantly being grazed on. White clover, however, is a great self-seeder even while it’s being devoured by livestock. Plant both varieties whenever possible, though white clover is more commonly recommended for grazing, and red clover for pasture and wildlife.

The red clover plant has deeper florets, making it harder for some pollinators to access. Some bees even “rob” from red clovers, chewing through the petals to access the honey… but without actually pollinating the flower in the process. White clover has shallower florets, allowing a wider variety of insect friends to collect nectar from them.

Red clover has been widely praised for its health benefits, while white clover lacks the chemical construct to be widely used medicinally.

Red clover is a short-lived perennial, or biennial in the northern USA and Canada. It grows as a winter annual in the southeastern USA. It will grow in poor soil, but it won’t thrive there. Plant it in fertile, calcium-rich soil with a ph ranging from neutral to slightly acidic to keep it happy. This clover grows well in partial shade, making it a common choice for growing beneath silage corn as a cover crop.

Simply scattering seeds is usually enough to get a clover patch started, though planting them 1/4 inch into the soil is best. Before clover has gotten fully established, annual summer grasses will be competing for sun and nutrients as well. Avoid growing your clover in these types of grassy fields, unless other steps have been taken (such as tilling) to ensure that the red clover will have a strong start.

During summer, a pinkish (not red) flower will appear, attracting all sorts of pollinating insects into your garden. If you want an actual red-colored clover instead, plant the variety known as “crimson clover”. To help with flowering (and seed production), you may want to add some phosphorus and potassium In the early spring or fall.

When you first plant you clover patch, a bit of nitrogen-rich fertilizer will help it get a good start. Luckily, red clover is a nitrogen replenisher, so it adds that element back into the soil each subsequent season.

Certain crops absorb as much available nitrogen in the soil as they possibly can during their growing season. These crops are referred to as “heavy feeders”, and include vegetables such as corn, kale, and other leafy greens. Planting red clover (or any clover, actually) will help replenish your soil’s nitrogen after harvesting these heavy-feeding crops. This is one of the main steps involved in crop rotation.

Truth be told, it’s not actually the clover plants that are replenishing this nitrogen. It’s a small bacteria that grows in tiny nodules on the roots. This bacteria, Rhizobia, is able to chemically convert nitrogen from the air and turn it into a usable form. The nitrogen is collected and stored inside the plant until it dies off.

To help release this stored nitrogen back into your soil, you can “chop and drop” or “till under” your red clover at the end of each season. This green manure (plant-based manure) is an excellent way to keep your springtime crops happy!

Another great reason to plant red clover in your garden (or yard) is to help slow erosion. When it comes to keeping your topsoil right where you want it, the sun, rain, and wind are constantly working against you. A sun-baked soil free of plants paired with a few days of strong winds can blow away your soil quicker than you can imagine.

A few days of hard rain can easily wash it away as well. Planting a deep-rooted cover crop—such as our friend red clover—can greatly reduce soil loss.

Red clover’s deep roots hold the soil in place. The lateral roots growing off the main tap root will concentrate in the top 5 inches of topsoil. These taproots can reach depths of 2-6 feet in its first growing season. Mature plants in well-drained soil may have taproots that reach down to 8 feet! This has helped red clover earn its reputation as one of the best cover crops to grow to fight soil erosion.

Once established, red clover’s sprawling limbs will grow thick and smother out most all weeds. I have a few super-thick clover patches in my yard that are so thick, I can actually hear the difference when I mow over top of them! These soft patches are always havens for snoozing pets and summertime bare feet.

Besides being a great addition to your yard or garden, red clover is also enjoyed by many different insects and grazing animal friends.

Red clover grows enough biomass to be hayed up to 3 times a season. It’s able to produce 2-3 tons of forage per acre, making it an inexpensive way to feed grazing cattle. Dairy farmers commonly include it into their dairy cows’ diets, as it provides necessary proteins that help to yield higher dairy production.

It’s also more easily digested than other common forage crops such as alfalfa and birdsfoot trefoil. It will also grow well in fields that aren’t suited for growing alfalfa.

If you raise rabbits (or other herbivores like degus or guinea pigs), you can a fair bit of clover into their diet. Wild forage such as plantain, yarrow, dandelions, red clover, and wild lettuce are welcome additions to their standard feed.

Among its other virtues, red clover is also a wonderful beneficial pollinator attractor—mainly bumblebees, honeybees, and butterflies. Parasitoid wasps will also visit your clover patch: insect friends that will help you fight whiteflies, aphids, and scales. So, mind your step when walking through your clover patch barefoot.

Bee species love the tasty nectar hidden in the pink flowers every summer. Bumblebees are the most common visitors though, as their longer tongues help them reach deeper into the flower when nectar levels drop. There have been efforts to breed red clover so the flowers are easier to access by honeybees and other friends as well.

The flower begins to fade to a lighter shade after successful pollination. If your clover patch continuously stays brightly colored all season, it means that not enough pollinators are visiting.

You can easily make a tasty red clover tea from a handful of the harvested flowers. This medicinal brew is high in antioxidants and anti-inflammatory compounds, and also helps aid indigestion. (Note: Red clover is a blood thinner, so if you’re going in for surgery or are on blood-thinning medication already, better skip the tea.)

To make your own herbal tea, you can either use fresh flowers, or dry some on newspaper and store in an airtight jar for later use. Harvest them in the morning when there is still a bit of dew, so they retain their pretty color. Steep the flowers as you would a regular tea. I suggest using a tiny bit of honey to help bring out the clover’s natural sweetness.

The red clover plant has been used medicinally for several centuries. Topically, it’s been used for burns, eczema, psoriasis, sores, arthritis and skin cancer. Usually, these are treated with a poultice made of red clover (and other herbs.) To make a poultice, chop up the plant and steep it in water, or simmer in coconut oil. Apply to the area and wrap up tightly enough to hold in place.

Since it’s an expectorant, red clover has also been taken as tea or tincture for breathing problems such as whooping cough and asthma. Some herbalists also use it to treat menopause symptoms.

Red clover is a wonderful plant, so much more than just a “weed”, as some may call it. I’ve even noticed it being planted on the sides of highways and interstates to help hold soil in place, and to help bring back the bees at the same time. I hope that you decide to continue this trend in you own yard as well: your garden will thank you!