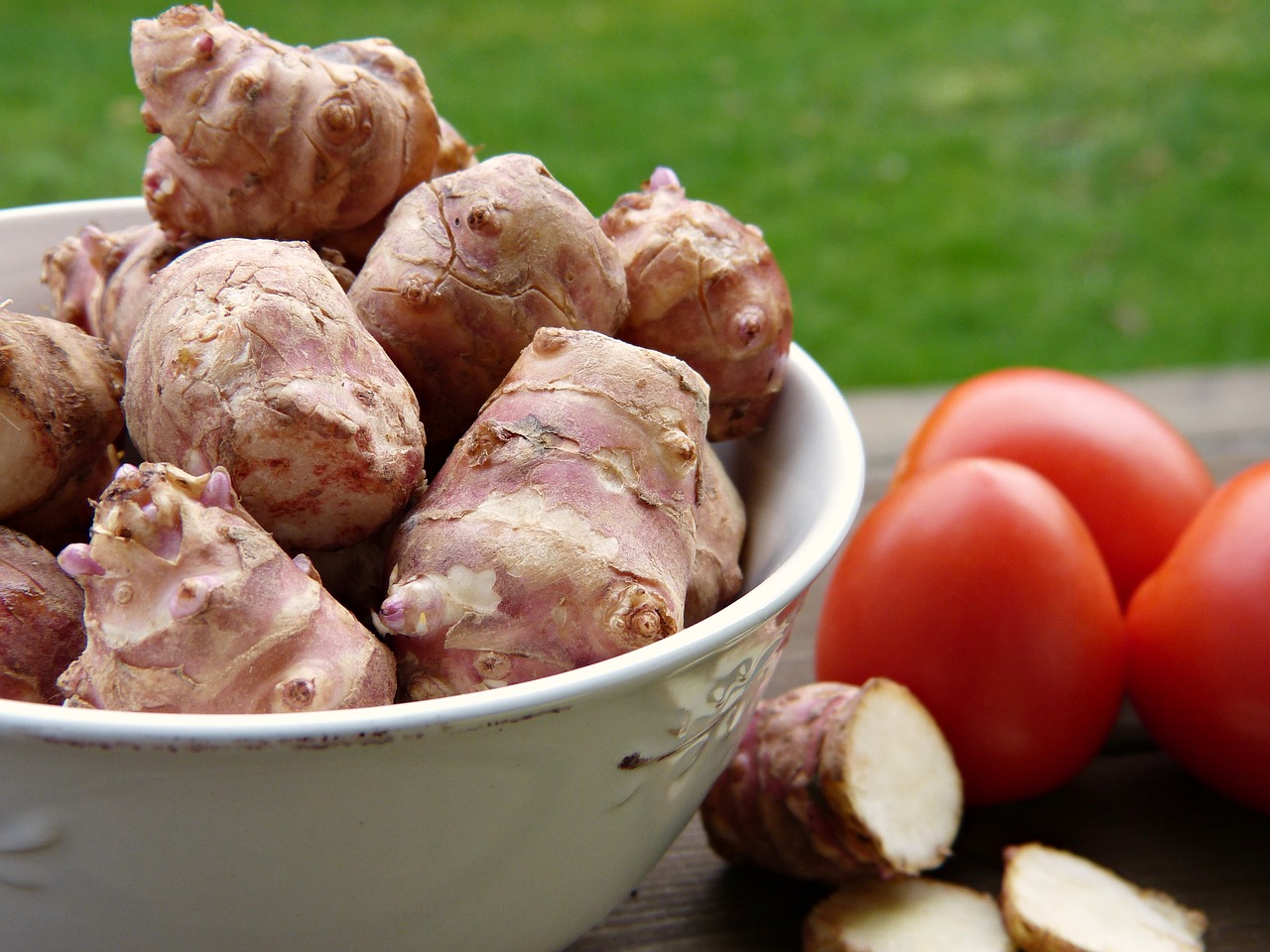 But are they anything like the artichoke we know and love? The flavor of Jerusalem artichokes does resemble true artichokes a little: that’s all the two have in common.

If you’re anything like me, you spent most of your life vaguely aware that Jerusalem artichokes existed and were fairly convinced that they were edible. Maybe not convinced enough to eat one yourself, but enough think that maybe, someday, you’d like to try one. Well, you were right: they are edible! What’s more, they’re delicious.

If you’re still not ready to take a bite of one, stick around. I’ll help you get to know these unique tubers a little better. Then maybe you’ll want to roast a few up and serve them for dinner alongside some chicken and olives.

The Jerusalem artichoke plant (Helianthus tuberosus), is a sunflower species native to North America. These delicious tubers were being cultivated as a food source by many indigenous tribes long before European settlers set food on the new world. In fact, just about everyone was growing these tubers in pre-Columbian days. They were so popular and so widespread, that we actually don’t know what part of the country they originated in.

These sunchokes have been growing and thriving across the North American continent for centuries. When European settlers arrived, they embraced these tubers into their diets as well. Early settlers soon sent Jerusalem artichokes back to Europe, where they were quickly naturalized. Everyone loved this delicious root. Like tomatoes and potatoes, Jerusalem artichokes soon became an essential part of the European diet.

People quickly began to realize that these tubers took some getting used to, much like potatoes and tomatoes. For example, they tend to cause issues with flatulence if eaten too often. As a result, the less challenging new world vegetables became more popular than these tasty tubers.

As times changed, Jerusalem artichokes became less and less popular in the American diet. While they’re still somewhat common in Europe, this once beloved plant has largely been replaced by potatoes and other, gentler vegetables.

That said, sunchokes keep popping back into American and European cuisine. During World War II, when rations for soldiers and civilians alike were sparse, the Jerusalem artichoke plant helped to round out the diet of occupied France. Furthermore, as recently as 2002, these plants have started to gain popularity in America again.

Many Americans are starting to diversify our gardens, especially with indigenous edible plants. As a result, the Jerusalem artichoke plant is popping up all over the heritage gardening world.

It’s great to see these delicious plants starting to regain some of their old popularity. Creamy Jerusalem artichoke soup is the most exciting and delicious way this old tuber is being reintroduced. But there are other ways as well. Unfortunately, none of them seem to involve a cheesy, creamy spinach dip!

But these plants have been known by many names. When they were first introduced into Europe, Jerusalem artichokes were called topinambours. This was because of a Tribe of Brazilian Natives with a similar name who came over to France with the tubers. Later, they were referred to as Canadian artichokes.

In fact, no one really knows how sunchokes got the name Jerusalem artichokes. The plants aren’t grown in Israel and have nothing to do with that region. One likely theory is that Italian immigrants called the plant a “girasole” artichoke —meaning a sunflower artichoke—but that their English neighbors, mispronouncing the Italian, converted “girasole” to “Jerusalem” instead.

Another theory attributes it to the early, Puritan settler’s love for Biblical names and places. Perhaps they planted many sunchokes around Salem, Massachusetts? Or perhaps the same pilgrims who gave their children names like “Flee Fornication” and “Fear-God” wanted to link their most prolific food plant with the central city of the Bible? We can only speculate.

The root is the sunchoke’s edible portion. It looks like a ginger tuber, with lumpy texture and pale skin. The aerial parts look like sunflowers. They grow to about 3 feet tall and bloom in bright golden flowers during late summer or early fall.

Because Jerusalem artichokes are part of the sunflower family, they have the same thick, hairy stems. They also have the wide, spade-shaped leaves and wide seed heads in their flowers. Birds and squirrels love the seeds, and a young Jerusalem artichoke plant is indistinguishable from its more popular cousins.

While the Jerusalem artichoke looks nothing like true artichoke, it does taste like artichoke. At least, somewhat so. Different people taste different complexities of flavor in this mysterious root. Its flavor is also commonly compared to swiss chard.

I think that Jerusalem artichokes have a sweet, nutty flavor. Sunchokes taste a bit earthier than true artichokes overall, but in a gentle, complex way. Everyone describes them a bit differently. In fact, the taste can vary even between different plants, or different seasons. Each sunchoke is a unique experience!

The roots sweeten as they age, so stored sunchokes will be sweeter than freshly dug tubers. Roots grown in poor soil will have a milder flavor, while roots grown in sunny, fertile soil will have the most intense taste. Store your Jerusalem artichokes for a few weeks before cooking if you’d like their sweetness to intensify.

Sunchoke pizza has become increasingly popular as well! Try is with garlic, kale, and plenty of cheese.

Do Jerusalem Artichokes Cause Gastro Discomfort?

There’s a rumor that eating Jerusalem Artichokes causes a lot of gas and bloating. Sunchokes may cause a bit of an upset in your digestive system if you’re sensitive to other plants with inulin, like onions, garlic, and beets. If eating inulin-rich foods like these cause abdominal discomfort for you, then avoid Jerusalem artichokes as well.
However, if you’re comfortable eating these root crops, you’ll be fine enjoying sunchokes.

If you’re only mildly sensitive to inulin, try eating only cooked Jerusalem artichokes. Avoid raw sunchokes and stick to soups, stews, and sautéed recipes instead. When inulin-rich foods are cooked, their fiber is easier to digest.

Sunroots are also very high in potassium. For those looking to boost potassium levels, a Jerusalem artichoke contains 6 times the amount of potassium as a banana! But high potassium levels aren’t always beneficial. If you have a kidney disorder, keep those potassium levels in mind and consume carefully.

Jerusalem artichokes may also encourage healthy probiotic growth in your gut. If you have candida or issues with yeast overgrowth, sunchoke may help balance your gut health.

If you’ve never eaten these tubers, start slowly and pay attention to how your body responds. Like all vegetables, different people have different tolerance levels.

So, you want to grow Jerusalem artichokes? You’re in luck! For these beautiful plants to thrive, you don’t need a growing guide, or much of anything. You just need a tuber or two, as sunchokes grow easily. A little too easily. They’re even on the invasive species list in some states!

Plant a tuber whole, or divide one into thirds and plant in the spring or fall. Whether they’re in sun or shade, the tubers will sprout up in the spring and start spreading. You can start harvesting the first year too. Each year, your plants will each produce about 75 tubers. They can spread by seed or underground through rhizome proliferation.

Just note that sunchokes will smother other plants around them. In some ways, Jerusalem artichokes are like Kudzu. They take over an area, spreading quickly and easily over a variety of soils. You’ll have a hard time getting rid of them once you plant them. Even if you harvest heavily each year, you can’t really kill off this plant.

It naturalizes so well into new areas, that no one really knows where it originated. Thankfully, Jerusalem artichokes are beautiful and delicious. So, we don’t mind too much when the take over the side yard and creep into the neighbor’s lily patch.