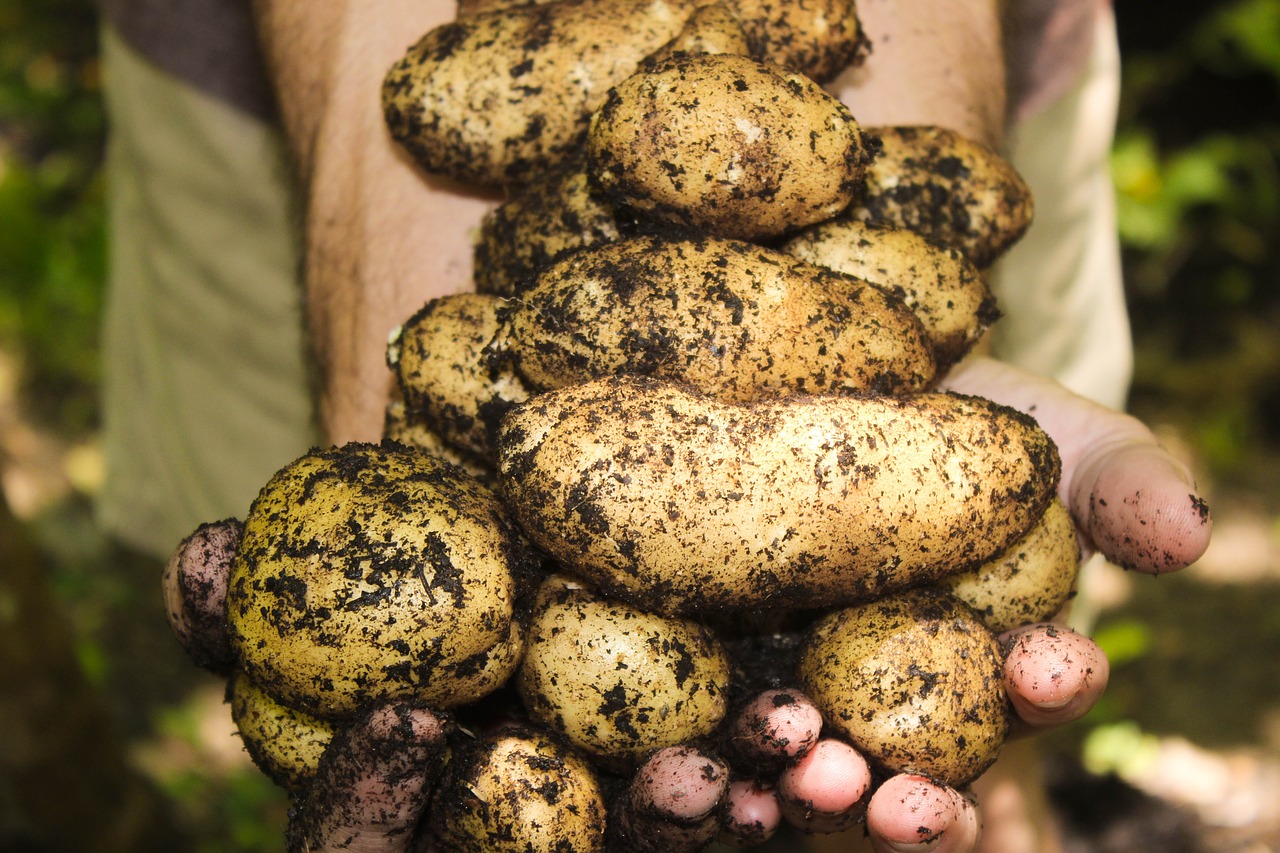 Hot, humid summers create ideal breeding ground for pests and diseases. One of the worst is potato blight (Phytophthora infestans). This fungal disease can obliterate crops in no time flat, but there are ways to prevent and treat it. Read on to find out how.

One it has established itself, potato blight is almost impossible to get rid of. That said, there are a number of steps you can take to protect your crop. The following guide will help you to identify this issues, as well as tell you what to do should the disease ever strike. We also offer practical suggestions for protecting not only your potatoes, but also the rest of your garden.

Potato blight is a fungal disease that can affect all members of the Solanaceae family, such as tomatoes, chillis, and eggplants, in addition to potatoes.

If you’re unaware of this nasty little infection, it’s a nearly impossible-to-cure disease that can ruin crops in a matter of weeks. It’ll turn healthy tubers into a smelly, rotten mash, and was one of the causes of the infamous Irish Famine.

Airborne spores spread fungal spores on the wind until they settle on a susceptible plant. However, potato blight will only develop if the weather is warm and humid. As such, late summer months can provide the ideal conditions for it to develop.

Scientists have developed two forms of measurement to determine when potato blight is most likely to strike. The older one is known as a Smith period. This is when the conditions to flourish occur on two consecutive days. According to the Smith period measurement, these conditions are:

A newer form of measurement is the Hutton Period. During this period, the ideal conditions for potato blight to flourish are:

Watching for Smith or Hutton periods allows us to predict this blight is likely to strike, so we can take preventative measures. Many countries also operate a potato blight watch website or system. Regularly checking this will warn you if there is blight in your state. By doing so, you’ll be able to take preventative measures to protect your crops.

If the marks on the leaves are patterned with target-like rings, it’s probably an attack of early blight. This isn’t as disastrous as potato blight. Left untreated, it can lead to your potatoes developing collar rot. Carefully applying a copper-based fungicide once a week will slow, or stop, the spread of early rot, allowing your potatoes the opportunity to grow.

Potato blight marks will quickly grow in both size and number. The marks may also appear on the plants’ stems. Turning over a marked lead will reveal a light, white layer of mould: the blight spores.

As the disease quickly develops, the leaves will shrivel and wilt. The stems will also blacken and rot, and the plant will eventually collapse.

Affected potato tubers are marked with dark patches. When cut open, the flesh of an infected potato will be stained brown, and will also have started to rot. Once infected, the crop will succumb to a secondary disease that turns them into a smelly mush.

The entire process, from noticing the first symptoms of potato blight to the tubers becoming mushy, will take only a few days.

Since this is an airborne fungal disease, complete protection is almost impossible. Taking the following preventative steps, however, will reduce the chances of your crop being affected.

Plant potatoes in a light, breezy spot with lots of space between the plants. Those planted closer to other potato crops are at increased risk because there are more spores present. An airy position will also help the leaves to dry quickly following watering or rain. This decreases the chances of potato blight developing.

Potatoes grown in greenhouses are also less likely to suffer from potato blight. This is simply because they’re more protected than crops grown outdoors. If you choose to grow yours in a greenhouse, you’ll need to use fresh soil every year. Doing so will prevent pathogens and pests from accumulating in the soil.

The need to regularly change soil also applies if you’re growing potatoes in containers or special potato grow bags. This method may seem more cumbersome than growing in the ground, but it enables you to move the potatoes inside if blight is likely to develop, thus giving them some protection.

If you plan on growing potatoes in the earth every year, simple crop rotation will help prevent against most diseases.

When watering your potatoes, try to water only the base of the plant. Try to get as little water as possible on the leaves. Damp leaves can encourage blight to take hold. Watering in the morning will allow the leaves time to dry in the sun, before the weather gets cooler in the evening.

When to Plant Potatoes

Potato blight tends to be more prevalent later in the growing season. Growing first and second early potatoes will enable you to dodge most outbreaks, because will have harvested your crop before the blight arrives.

When selecting your seed potatoes, choose varieties that are blight resistant. Some of the most popular blight-resistant potatoes are:

Orla is also a good early-harvest choice, but isn’t as resistant as the other varieties mentioned. Finally, Valor is a good, blight-resistant late mainc rop potato.

If you’re growing your potatoes outside, then spraying with a copper fungicide can be a good preventative measure, but it won’t cure disease that has already established itself. If you’re worried about applying chemicals to edible crops, copper fungicide is listed on the National Organic Program list. It’s safe to use as long as you follow the application instructions. Blight prevention sprays are also available.

When you harvest your crop, make sure to remove every single potato. Small potatoes left to rot in the soil can cause infection and disease. You’ll also need to inspect each tuber for damage. Store only those that are in perfect condition.

Finally, regularly checking for potato blight outbreaks in your area will give you the chance to take preventative measures. Keep in mind that many of these steps are just good growing practice. and should be adopted anyway.

Note that there is no cure for potato blight once your plants are infected. That said, prompt action can prevent the disease from spreading, so you can save most of your crop.

Dealing with Potato Blight on Leaves

If caught early, before 10% of the foliage is infected, you can attempt to stop potato blight from spreading. Do this by trimming away—and then burning—any infected leaves. Make sure to properly disinfect the secateurs, and any other tools you use, afterwards. The best way to do this is by soaking them in a 1:10 bleach:water solution for at least 30 minutes.

If over 10% of the plant is afflicted by potato blight, you’ll have to take more drastic action. Cut away all the growth above the soil, and burn it. Prompt action reduces the chances of the blight spreading to any nearby crops, and possibly infecting the soil.

If you’re able to remove the aboveground growth easily, then it’s likely that the potato tubers haven’t been affected. The only way to be sure, however, is to remove a few from the ground and inspect them for symptoms.

I would advise waiting 2-3 weeks before doing this. Allowing the soil to sit undisturbed allows for any lingering spores to die. This decreases the chances of the crop becoming infected when lifted.

As you lift the potatoes, wipe them with a clean, dry cloth, and inspect each one for blight. To make completely sure, cut one in half and check for further signs of the disease. Store good potatoes in a dark, cool place. If your crop is infected, you’ll have to dig it up entirely and destroy it.

The cold winter months will kill most blight strains, but some new fungal strains have emerged that seem able to overwinter on old potatoes left in the ground. Removing all the potatoes from the ground, and practicing crop rotation as well as other basic, good gardening habits, will help to eliminate the chances of blight returning for a second successive year.

Should the worst happen, follow the steps laid out in this guide. You’ll be able to act quickly, saving your crop and preventing the disease from spreading or returning.