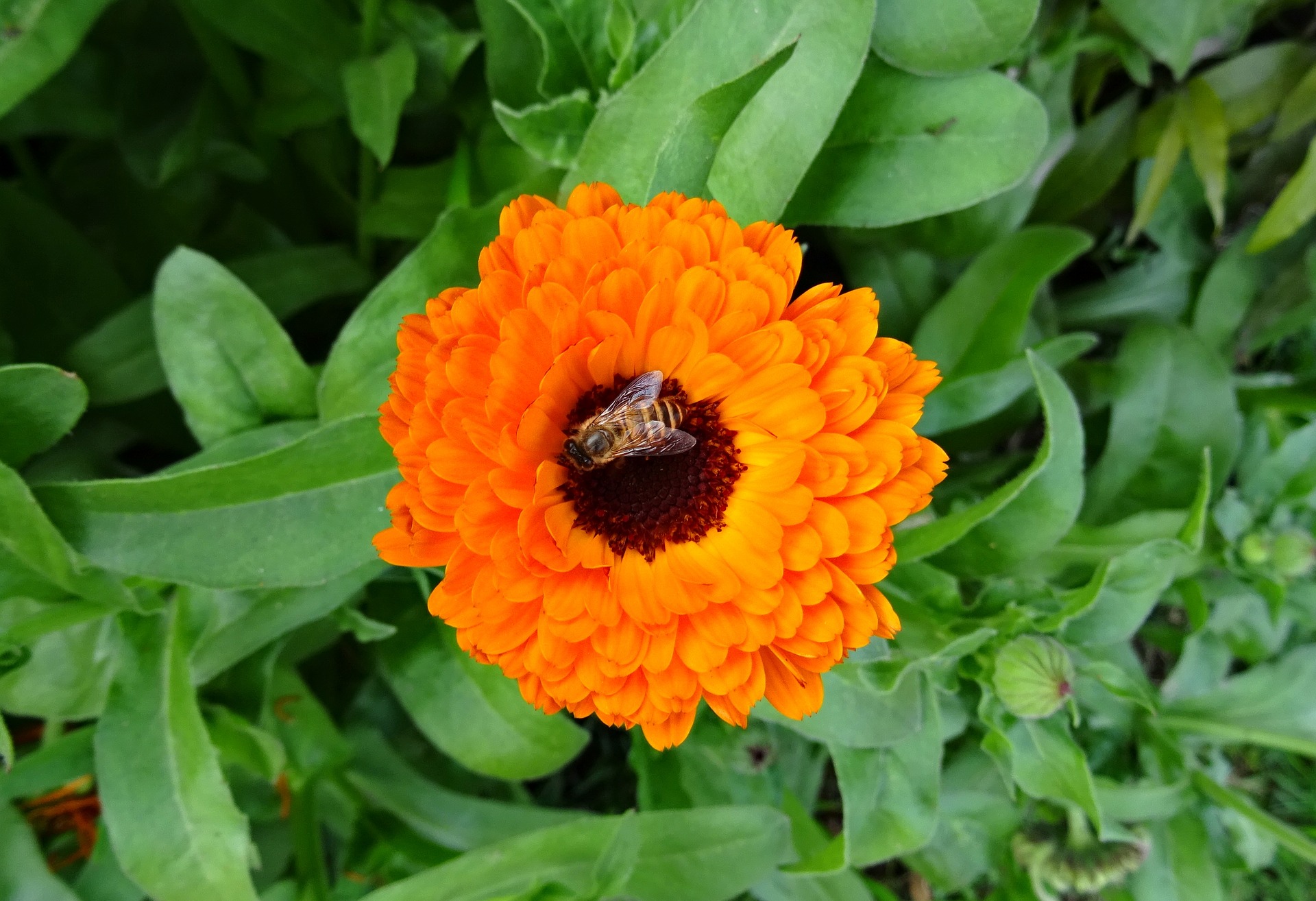 The lovely pot marigold, which is also known as calendula (Calendula officinalis), is an incredibly useful little plant. It’s not quite as ostentatious as a rose or peony, but its uses make it an invaluable plant ally. Read on to learn more about why this humble flower belongs in every garden.

via sarangib / Pixabay.comCalendula is part of the Asteraceae family, along with chrysanthemums and daisies, but isn’t the same as a common marigold (Tagetes).

Pot marigold grows as an annual, or a short-lived perennial in warmer climates. It has a profuse blooming habit, ideal for decorating beds and borders with bright, daisy-like flowers. However, this flower isn’t just a decorative plant: it has numerous medicinal benefits, and can also be used as a flavoring.

This article will take you through everything you need to know about the pot marigold. Where it comes from, how to grow it, and what to do with it.

The History of pot Marigolds

People have been growing and using calendula since prehistoric times. This flower is believed to have originated in the Canary Islands before spreading into Europe and the Middle East. The pot marigold spread to eastern Asia by 1200 CE.

In India, Hindus saw the plant as sacred, calling it the “herb of the sun” and linking it to Ganesh. Buddhists also use calendula in many of their ceremonies.

Throughout India and wider Asia, pot marigolds commonly decorate temples and sacred sites. Meanwhile in China, people have recognised the plant’s similarity to chrysanthemums. Here the flower has come to symbolise prosperity and longevity.

The pot marigold has been a symbol of love and good luck since the Medieval era. This is probably due to their cheerful, bright flowers. Folklore claims that the flowers can predict rainfall, as the blooms tend to open as the sun rises. If the plant fails to open rain, is said to be approaching.

Where Does the Name Come From?

Even the name calendula is a sign of the plant’s historic value. “Calendula” derives from the word, calendulae, meaning little calendar or clock. This itself originates from the Roman name for the first day of the lunar month, Calends. As such, their name supposedly refers to their daily opening habit. Pot marigolds tend to open in the morning as the sun rises, and the flowers close as the light fades.

As in many other cultures, the Romans used pot marigolds in ceremonies. They also used it as a decoration, both for buildings and in personal floral garlands. Additionally, the Romans harnessed the plant’s many culinary and medicinal benefits.

As Christianity spread throughout Europe, calendula continued to grow in popularity. It also acquired a new name. The name marigold is inspired partly by the plant’s golden flowers (-gold). This name also notes the flower’s habit of blooming during festivals of Virgin Mary (Mari-).

Until recently, the military used calendula-infused ointments to dress wounds and prevent infections. During World War 1, Gertrude Jekyll—a noted British garden designer—led a campaign to grow and harvest calendula. This supply was sent to military hospitals in France, and helped to treat injured soldiers. It was only with the advent of antibiotics that calendula’s use declined.

Pot marigold—sometimes known as Scotch marigold—is a herbaceous perennial in USDA zones 9-11. Gardeners in zones 2-11 can grow the plant as an annual. There are many different varieties available, and some of the most attractive and interesting are:

Caring for Your Pot Marigold

Calendula isn’t just very useful—it’s also very easy to grow. You can either purchase pot marigolds as plug plants or as seeds, sowing after the last local frost date.

These flowers grow best in full sun positions, and prefer well-draining, moderate to slightly acidic soil. In hot climates, try to provide some afternoon shade to the plants.

Pot marigolds don’t require feeding. However you can apply a balanced, water soluble fertilizer once a month if you’re growing in containers or marginal soils. Be careful, however, as over-feeding will cause legginess.

You can propagate calendula from seeds. To gather the seeds, allow the spent flower heads to remain on the plant until seed heads form. Harvest when the heads darken and ripen. Pot marigolds self-seed if not deadheaded.

The best time to harvest calendula flowers is in late morning after the dew has dried. Pick only fully open flowers, and dry them on paper in a dry, shady spot, turning occasionally. Store the dried flower heads in glass canning jars until you’re ready to use them.

Pot marigolds rarely succumb to pests or diseases. The most common issue—powdery mildew—is easily cured by improving air circulation around the plant.

Slugs or snails can sometimes target young plants. These can be countered with chemical applications or other, natural methods. Should whiteflies or aphids attack your flowers, wash them away with either an insecticidal soap or a blast from the hosepipe.

The Health Benefits of pot Marigold

Calendula is ideal for making herbal ointments, teas, and other treatments, as the plant has anti-inflamatory,  antispasmodic, and anti-fungal properties. Amongst other things, calendula can be used to soothe sunburn, treat rashes, and eczema, and reduce swelling caused by muscular injuries or sprains. Fungal infections such as athlete’s foot, as well as inflammation and itchiness caused by conjunctivitis can also be treated by the plant.

You can also brew marigold flowers into a tea to ease digestive problems. It can also ease gastritis, acid reflux and ulcers, and may be able to alleviate symptoms of inflammatory bowel disease. Marigold tea also eases stomach and menstrual cramps.

Calendula extracts can also promote the growth of new, healthy tissue by encouraging blood flow to the affected area, boosting collagen production. This ability to promote faster healing is one of the reasons why calendula-based applications are often used post surgery.

Calendula as a Bug Repellent

Pot marigold produces a pungent odor that repels bugs and insects. Like common marigold, it’s an excellent companion plant. The plants antioxidant content can be extracted for use in sprays, lotions and even candles, all of which will deter unwanted insects.

How to Harness Pot Marigold’s Benefits

You can purchase marigold-based extracts or essential oils from health food and organic stores, as well as online. Purchasing this liquid form allows you to add a small amount to your current moisturizer or shampoo.

Always read the instructions before you use any product. If you’re unsure, consult a medical professional.
Avoid using if you have an allergy to:

…or any other plants in the Asteraceae family.

You should also consult your doctor before using if you’re pregnant or breastfeeding. While calendula isn’t thought to be harmful, little is actually known about its effects in these areas.

Also consult your doctor if you use benzodiazepine or barbiturate medications such as:

Never apply calendula to open wounds unless your doctor has told you to. If you’ve never used calendula before use only a small amount at first. If you don’t suffer any ill effects, steadily increase the dosage. Never exceed the specified limit.

Keep marigold products out of moisture and direct light to prolong their life span.

To make your own marigold cream, chop fresh flowers and dry them on a window sill. Stir the leaves, or grind them into virgin coconut oil. Heat the mixture lightly, stirring it, before allowing it to cool. Once cool, apply the mixture to the skin.

Harvest marigold flowers, and dry them in a cool location, out of the sun. Once dry, boil water and add a tablespoon of flowers to the pot. Allow the mixture to steep for about 5 minutes before drinking.

If your symptoms are severe you may need to drink more than one cup throughout the day.

Add young marigold leaves to salads, soups, stir fries, and seafood as a flavoring. Meanwhile flower petals are a useful fresh garnish. Pot marigold adds an aromatic, peppery flavor, similar to saffron. For this reason pot marigold is often unfairly called “poor man’s saffron”. Use it to add color and flavor to stuffed eggs, cream soups, and fruit breads. You can also use marigold petals as a cocktail garnish.

We are not alone in being fans of pot marigolds. William Shakespeare wrote in The Winter’s Tale, “The marigold goes to bed wi’ the sun, and with him rises weeping.”

Befriend this humble little bloom and enjoy all the many blessings and beauties it can bestow.