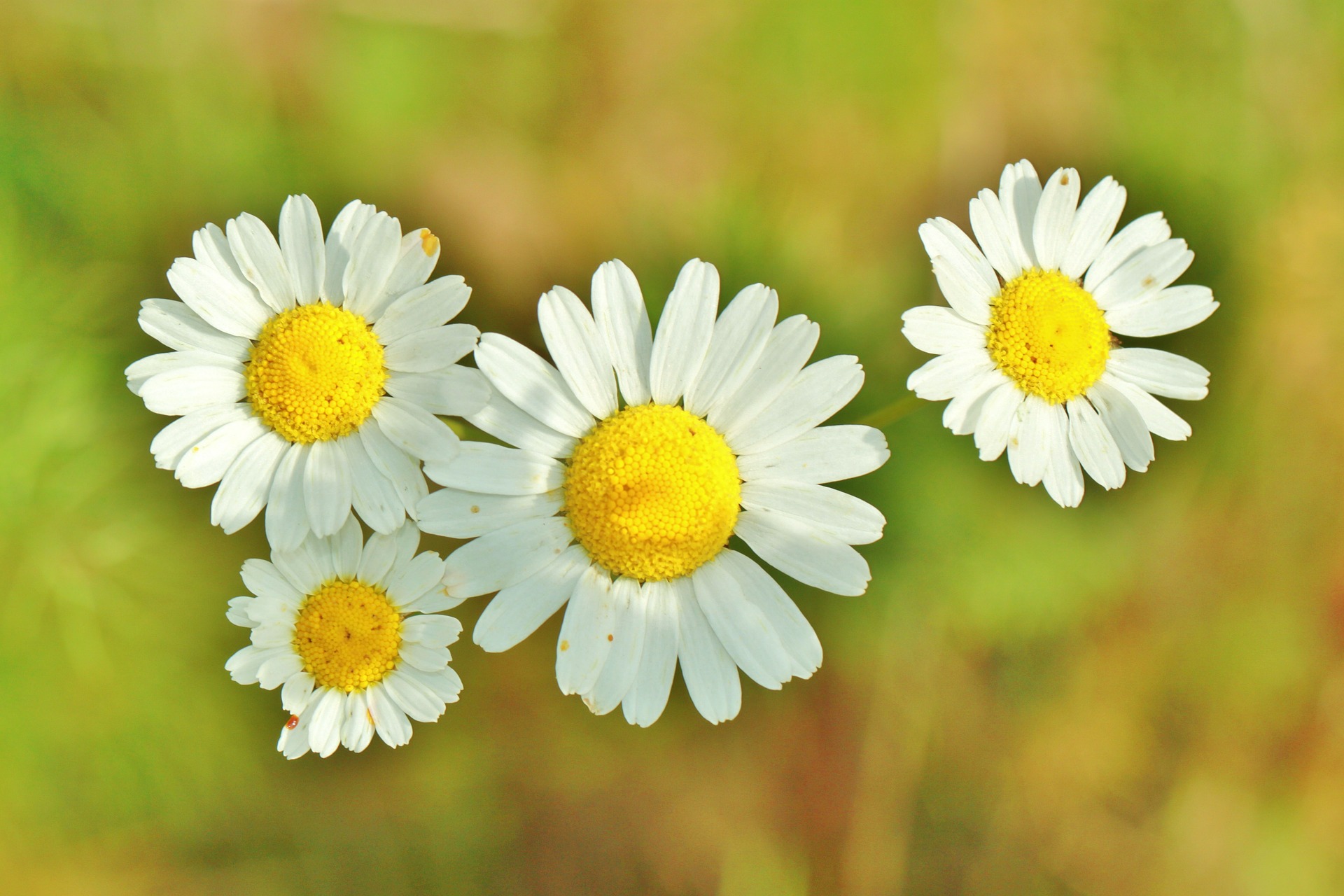 Chamomile—that deliciously soothing little flower—has been filling our tea-boxes and scenting our pillows for millennia. With its delicate, fern-like leaves and tiny daisy-petaled blossoms, this charming herb makes a graceful addition to any garden. It looks soft and welcoming on stony paths or creeping along stone walls, giving a cozy, old world feel as it blooms. If you’ve never grown a chamomile plant before, be prepared to fall in love!

There are actually two distinct chamomile varieties. In fact, they’re different species, but they’re often lumped together since they’re grown and used in almost indistinguishable ways.

Since it’s such a hardy, low-growing groundcover, the Roman variety is often used to create a scented lawn. Ideal for summer picnics or barefoot strolls, a “Chamomile Lawn” is a low-maintenance garden stunner.

“False” chamomile (Matricaria recutita), commonly known as German chamomile, is an annual. It’s one that self-seeds so abundantly that it’s been know to turn into an invasive weed if not kept in check. Plant it one season and it’ll be surprising you all over your garden for years to come. False chamomile tends to grow a little taller than true chamomile, with slightly larger flowers and sparser leaves.

The best way to tell the two apart is by cutting the conical flower center in half and looking to see if it is hollow (False) or solid (True). Apart from these few small differences in appearance, the two are almost entirely interchangeable. Even folklore treats them identically.

The word chamomile comes from the Greek words “kamai”—meaning “on the ground”—and “melon”, which means “apple”. Both varieties’ apple-scented leaves and flowers have inspired people everywhere. The Spanish name for the herb is “manzanilla”, which means “little apple”.

It’s considered a warming herb, under the protection of the sun, because the tiny flowers look so much like little suns. In Egypt it was sacred to Ra and used in mummification, perhaps because of its sweet, fresh scent.

In the north, ancient Anglo-Saxons called it “maythen” and counted it among the 9 sacred herbs given to mankind by Woden. It was considered especially purifying and brought love and prosperity to those who wore it. Even up to the 20th century, gamblers would sometimes wash their hands in chamomile water for luck!

The chamomile plant’s history is full of sleep associations as well. The herb is a mild sedative, and was strewn in bedrooms to drive away evil spirits and tucked under pillows with basil and lavender to ward off nightmares.

Today, chamomile is still tucked under pillows by naturally minded mamas to help their children sleep. And a tea made from the flowers is recommended for insomnia and anxiety by doctors and grandmothers alike.

The tea is also helpful for calming colicky or teething infants (just rub a little on their gums with your finger), and for clearing up dark under-eye circles. Or, soak a clean cloth in cool chamomile tea and place it over your eyes to help heal conjunctivitis. It also helps to soothe tired eyes after a long day in front of the computer!

Throughout most of Europe, chamomile is used for digestive and respiratory issues as well. A cup of its tea after a heavy dinner settles the stomach, and breathing in chamomile steam helps calm and opens the lungs during an asthmatic episode.

Chamomile’s uses aren’t limited to teas. Another popular way to use the herb medicinally is by steeping it in oil. I recommend extra virgin olive oil, but almond oil is another great option. Cover a cup of fresh blossoms, or 1/2 to 2/3 of a cup dried with one cup of oil, and let it steep for one or two weeks. Then strain out the herbs and your oil is ready to use!

This oil can be used directly or made into a salve by melting in beeswax. In both forms it can be used on skin complaints: eczema, cold sores, chapped skin, acne, even bruises and sprains can be soothed by massaging in a bit of of infused oil.

Chamomile (both varieties) has been shown to have antiviral, antibacterial, and anti-inflammatory properties. No wonder herbalists have considered it a cure-all for centuries!

Chamomile likes to be taken for granted. It’s the quiet, little nursemaid of the garden, supporting its surrounding plants and welcoming helpful insects into the garden.

Roman chamomile seeds should be started inside, about 6-8 weeks before you want to transplant them outdoors. They like warm, loose soil, so keep their little pots at around 70 degrees for ideal germination rates. Be sure to use a seed-starting mix or sift your soil to keep it light and fluffy. Cover the seeds with just 1/4 inch of soil and keep it moist.

The seedlings will start popping up within three weeks, and they’re going to want a lot of light right away! A greenhouse, bright window, or fluorescent plant lights will keep them growing well. But, if you use a plant light, turn it off for at least 8 hours at night, so your little seedlings can get some rest. Plants need a bit of time in the dark as well.

After about 5 weeks of growing, get your chamomile seedlings outside to “harden off” before transplanting. Keep them somewhat protected, but make sure they get to experience the wide, outdoor world before you put them in the ground.

German Chamomile can be sown directly into the soil after any danger of frost has passed. Choose well-drained soil with average nutrients, and scatter the seeds before covering with about 1/4 inch of soil. Keep the ground moist and you’ll see an abundance of tiny seedling appear in about 14-20 days.

You may have to thin both varieties to about 10” apart if you don’t want to end up with an aforementioned “chamomile carpet” in your garden bed!

It can tolerate less-than-ideal soil and sun conditions, though it prefers loose, loamy soil with a slightly acidic pH and plenty of sunlight. A rich soil will cause the plant to grow lush and leafy, but decidedly lacking in blossoms. Avoid overwatering as well. Chamomile can handle a moderate drought without any help.

Where to Plant It

As delicate as chamomile appears, it’s a hardy little plant that does well in pathways and enjoys being trodden underfoot. It can pop up from between patio stones or alongside raised bed to keep the garden cozy and sweet smelling.

Companion planters regard chamomile as a bit of a cure-all for the garden because of its ability to nurture the plants around it. Traditionally, farmers have planted chamomile under apple trees and alongside cucumbers and cabbages to improve flavor. Plant it alongside herbs like basil and thyme to increase essential oil production (and therefore healing properties) in these plants.

Chamomile also attracts friendly insects like bees and ladybugs to the garden, and repels mosquitos. Your garden certainly does better with this nurturing little plant nearby!

It does not generally do as well indoors. It’s a social plant, preferring gardens and rocky walls to planters and pots. Grow it outside with lots of light, minimal watering, and a companion plant or two. Try setting it up near a radiator or woodstove, to make sure the plant stays warm, and near a south-facing window for lots of light. At least four hours of light is essential for your indoor chamomile to thrive.

Tucking a plant into a large pot of mixed herbs is a great way to keep a potted chamomile plant happy indoors. As it does in the garden, your indoor plant will help its fellow herbs thrive. Just make sure to monitor its spreading so it doesn’t take over the whole pot.

Harvesting chamomile is easy. Grab a little, wide-brimmed basket and start picking little blossoms! You can harvest flowers as you see them, if you don’t care about your German Chamomile reseeding itself, or about every 10 days if you do want to make sure it comes back again next year.

Use the flowers fresh, or dry them yourself by spreading them out on a screen and leaving them for about a week in a still, dry place. Shift the flowers on the screen as needed to make sure the entire plant is exposed to the air.

In very humid weather, you may need to set your screen in a low oven. Heat the oven to about 100 degrees, set the screen of drying flowers inside, and crack the oven door open. Leave the flowers there for no more than an hour. Then move them back into the fresh air to continue drying.

Keep the dried flowers in a cool, dry place—like a pantry or medicine shelf—and they’ll last up to a year.

Chamomile is one of our oldest friends in nature. A gentle nurse, a cozy carpet on the garden floor, a little bouquet of joy. Welcome it into your garden and see why both True and False chamomile have been considered lucky for centuries!