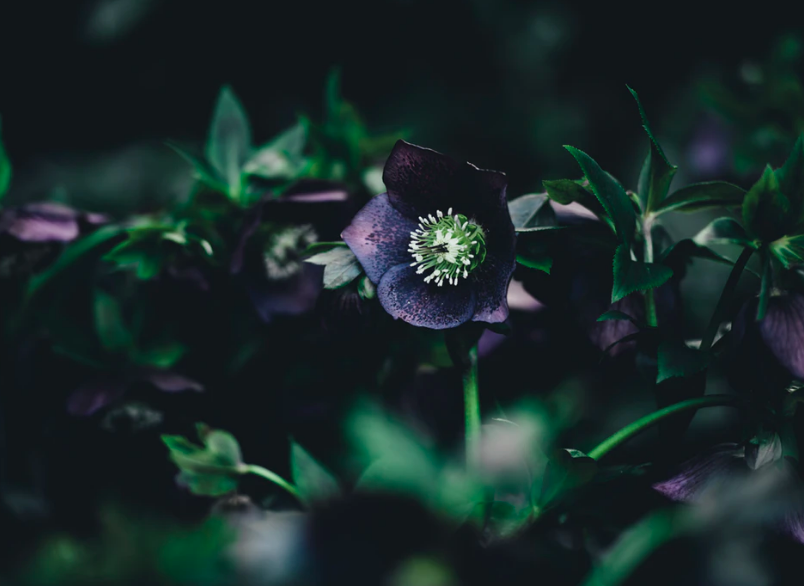 Hellebore sounds like a dangerous herb, doesn’t it? Maybe it’s the name, as it’s a little too close to “Hell” for some people’s comfort. Or maybe it’s witch’s herbals list hellebore next to belladonna and mandrake root. All were used centuries ago in poisons, potions, and flying ointments by medieval witches.

Hellebore’s name has nothing to do with Hell in reality, but it does have unsavory connotations. Hellebore is from the Greek Helleborus, and translates literally to “injure food”. That’s right, hellebore was named after its famous use as a poison! The ancient Greeks knew how to use this plant successfully. In fact, they used it in battle to poison a besieged city’s water supply, and in smaller doses to (supposedly) cure madness.

Since the fall of ancient Greece, this plant has held a shadowy place in the flower world. Full of magic, mystery, darkness, and danger, this flower is a gothic delight. This evergreen, wintertime flower reminds us all too clearly of our own mortality. It thrives in seasons of dying light and cold, frozen soil. Blooming in the shadows, hellebore’s lovely flowers draw us into the darkness with it. Let’s meet this dark beauty.

Hellebore is not a rose, in fact, it’s a member of the buttercup family. The flowers only look like roses. Black hellebore (Helleborus niger), which is the oldest variety and most steeped in legend, blooms in the winter. Legend says that it sprung up from the tears of a young girl, who saw the Child Christ, but had no gift to give him. She cried and her tears blossomed into these flowers.

Now, the Christmas rose blooms every year in the late winter: a beautiful, snow-bound gift for the newborn Jesus. In fact, this is one of the few sweet legends that surround this plant. There’s a kernel of hope at the heart of hellebore’s legend: even in its dark history, the legend of the Christe Herbe brings hope.

This distinct and somewhat more deadly variety of hellebore, Helleborus orientalis, blooms in late winter. Often, its flowers open at the start of the Lenten seasons, and since those flowers are usually purple and pink, they fit the season perfectly. Helleborus orientalis is one of the most toxic varieties of true hellebore, and also one of the most popular in modern gardens.

Veratrum viride, or false hellebore isn’t a member of the hellebore family at all. In fact, it belongs to the lily family, and is also highly toxic. Legend says that Alexander the Great died of white hellebore poisoning after encouraging his doctor to use it in his treatments. He may have wanted to prove his strength by taking a dangerous purgative, or he may have been maliciously poisoned.

They bloom between midwinter and early spring, often springing up out of the snow. Additionally, they grow well in zones 4 through 9, and may even be hardy enough to provide late winter color as far north as zone 3.

Hellebore’s ability to thrive in northern gardens and provide color to wintery gardens endears it to modern gardeners, who want to brighten up a bleak, February landscape. But its history in legend and folklore is full of excitement, mysteries, and dangers.

While ancient herbalists occasionally used hellebore to heal, its primary role was more sinister. Basically, it was most often used as a poison. Its unlucky victims eventually died of cardiac arrest after nausea, vomiting, tongue and throat swelling, and a slowed heart rate.

This flower tends to be burning and acrid in its interactions with the human body. As a result, careless handling can cause skin irritations and ulcers. It’s best to handle hellebore with gloves and keep this plant out of the reach of children and pets.

Curing Insanity, and Other Useful Attributes

When King Argos’ daughters were driven mad by capricious Dionysius, the healer Melampus gave them hellebore in milk to restore their sanity. The plant is occasionally referred to as Melampodium in his honor. But, while this plant has a reputation for purging insanity from people, it’s not a safe choice for healing mental health issues.

All of its herbal uses have long since been abandoned, though they all involved a mundification of some kind. In the case of King Argos’ daughters, the madness of the maenads had infected them, Melampus used hellebore to draw it out. In other case, the purgation was less exciting.

Hellebore was often given to dispel worms and intestinal parasites. Because it is a strong emetic, it was often possible to clear up an entire case of parasites with one, small dose. Unfortunately, because of its dangerous toxicity, it’s easy to overdose on.

Hellebore can affect different people in very different ways. Pliny the Elder recommended that the very young, the very old, and the weak avoid taking it. After all, one careless treatment could quickly turn fatal.

The Risks Outweigh the Benefits

These days, everyone avoids taking hellebore. There are many other herbs that work well for parasites, and we try to treat mental health issues more gently in modern times. But medieval and ancient herbalist who harvested it for healing tried to mitigate its dark nature as they harvested it. The herb was harvested facing east, as the herbalist prayed for guidance as she pulled up the roots.

If an eagle flies overhead as hellebore is being harvested, then the harvester will be dead within a year. It’s quite a risk, but in ancient herbalism, magical roots are often guarded by birds. Both mandrake and peony roots—powerful herbal allies in both magic and healing—were also said to be guarded by birds.

The Darker Side of Hellebore

It was said that medieval witches harvested hellebore on moonless nights, facing the east in defiance instead of supplication. Unlike Pliny, they cursed the coming dawn and spat on the ground as they brought forth the root. Then, they used it to curse and control those around them.

In folklore, hellebore is often used to call forth demons and curse enemies. It was particularly known to curse food and fields. Furthermore, neighbors with evil intentions sprinkled hellebore on wheat or vegetable gardens to make the harvest toxic or foul-tasting.

Old world witches were famous for their flying ointment. They rubbed a salve of herbs and rendered fat over themselves and then took off flying in the air. Hellebore features prominently in all of these recipes, alongside belladonna. Both herbs have a reputation for disrupting heartbeats and causing hallucinations.

Who knows if medieval witches ever actually flew, or if they only believed they did so because of the herbs’ hallucinogenic effects? Either way, flying ointment was a dangerous high and hellebore played a significant role in its makeup.

Hellebore’s other primary magical use was as an invisibility powder. Witches ground it into a powder and then walked on it to make themselves invisible. Sounds like a helpful skill to have if you’re poisoning crops or flying through the air.

This plant isn’t all darkness and evil. It’s occasionally used in protections spells as well. But for the most part, it was cultivated and used in dangerous ways for malicious purposes. It’s a witchy, spooky, and dangerous plant to work with. But hellebore’s dark past makes it a delightful addition to a gothic garden.

If you’re hoping to create a darkly themed garden, whether it’s a witch’s garden, a poisoner’s garden, a medieval garden, or a goth garden, hellebore’s magical history and folklore make it an ideal addition.

The Language of Hellebore

In the Victorian language of flowers hellebore has an interesting dual meaning. It primarily refers to a scandal, which fits well with the plant’s dangerous history and links to both witchcraft and insanity. But, hellebore has another meaning that offers a positive spin on any situation.

Hellebore can mean hope as well. After all, this deadly plant blossoms from beneath the snow. It blooms in dark winter days and reminds us all that spring is on the way. Hope fits the hellebore plant perfectly. Like so many of us, this uniquely beautiful plant has a lot of regrets in its past.

But maybe that’s why hellebore continues to have a home in our gardens. We won’t be using it to curse our neighbors or poison a town. Instead, we use it to find hope again in the darkness. Watching hellebore blossom in the snow, we feel that within each of us lives “an invincible summer..no matter how hard the world pushes against [us], within [us all] there’s something stronger—something better, pushing right back.”