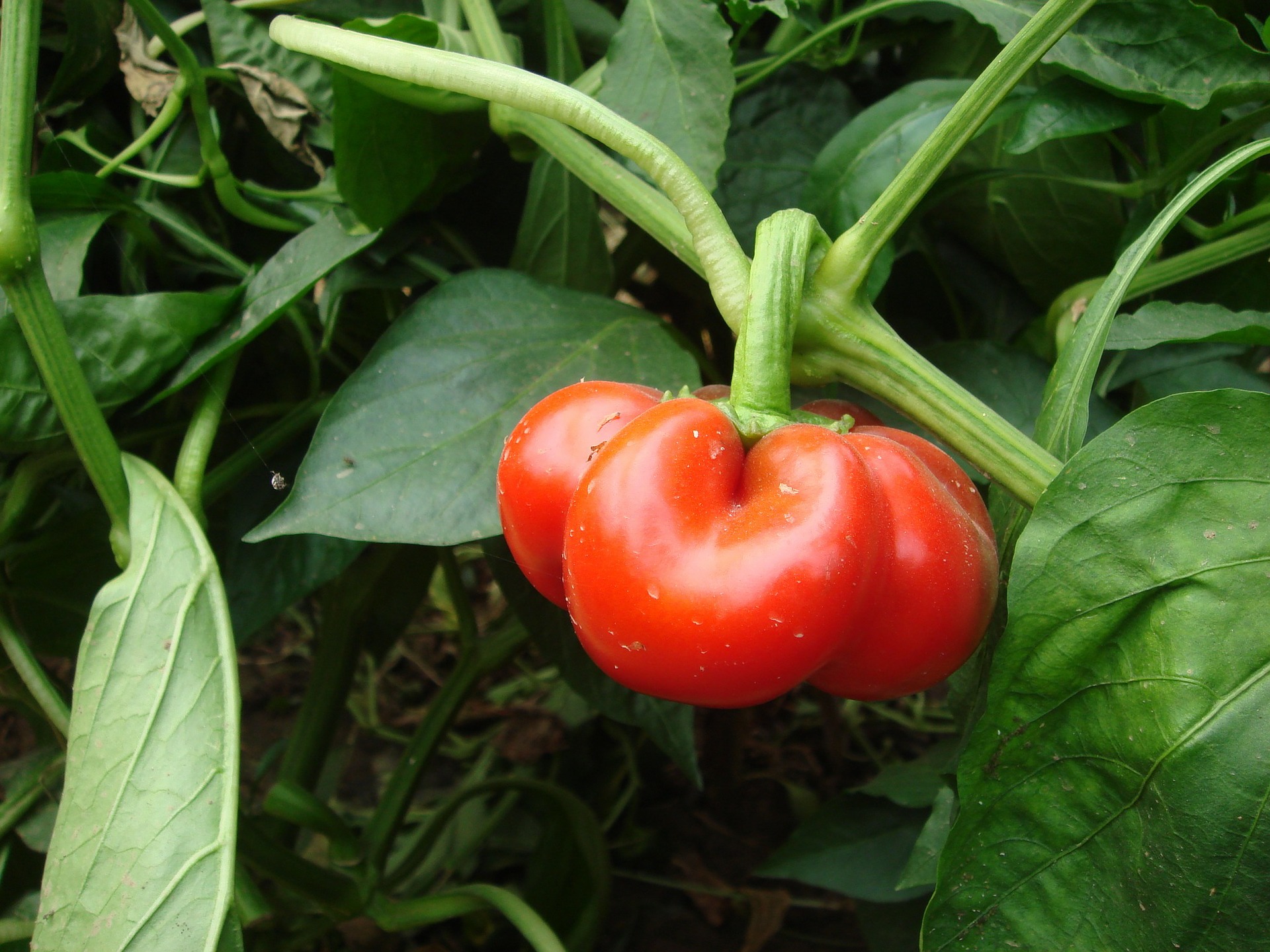 Bell pepper plants are some of the most attractive and rewarding plants to grow. In fact, their rich green leaves and bright fruit are a common sight in many vegetable gardens. Despite having a reputation for being a tricky plant to grow, with the right care and attention you’ll be able to enjoy a steady supply of sweet-tasting, colorful peppers all summer long.

If you’ve never grown a pepper before, or you’ve tried and failed, here is everything you need to know to successfully grow your own bell pepper plant.

You can buy bell peppers as young plants or grown them from seed. This latter option is cheaper and gives you a wider range of plants to choose from. Amongst the favorites are:

Canary Bell: A slow-growing variety, it can take 100 days for the plant to mature. Your patience will be rewarded with a prolific yield of bright yellow fruits.

Big Red: This pepper takes just 75 days to mature, and its thick flesh turns red as it ripens.

Gourmet AGM: This bright orange variety will happily grow in a container or greenhouse. It also enjoys a long cropping season.

Sow 3 seeds in 3-inch pots filled with fresh seed compost. Should all 3 seeds germinate, remove the weakest seedling. The remaining 2 bell pepper seedlings can then be grown on together as one plant. Additionally, pairing peppers encourages more protective leaves to grow and produces a greater yield.

Water the pots with a fine spray and place in a propagator or on a warm windowsill. Germination occurs at temperatures between 65-70°F and, depending on the variety, can take up to 3 weeks.

Re-pot the seedlings into larger containers when they have produced 3 true leaves. You can also apply a dose of organic fertilizer. Keep the soil consistently moist as the plants grow.

Bell peppers need at least 6 hours of direct sunlight every day. Plant them in a sheltered, full sun position, in rich, well-draining soil.

As members of the Solanaceae family, bell peppers are prone to many of the same diseases and pest problems that affect tomatoes and potatoes. Use a simple crop rotation system to avoid many of these issues.

Harden off the seedlings before planting only after the last frost has passed. The soil should also have warmed up to at least 65°F. You can warm up the soil by covering it with a plastic cover for a couple of weeks. While hardening off the seedlings prepare the soil by working in fertilizer or compost.

When the seedlings are ready, dig a hole large enough to hold the root ball. Along with the plant place a teaspoon of general purpose fertilizer in the hole. Some people also like to add a handful of matchsticks for a helpful sulfur boost.

Depending on the variety, peppers need to be 18-24 inches apart. Paired peppers should be kept in touching distance of each other. Once planted, water the peppers in and surround with 2 inches of mulch.

Bell peppers grow best in a daytime temperature range of 66-82°F and a nighttime range of 59-68°F. If you live in a cooler area, you’ll have more success growing the peppers undercover in pots. Growing bell peppers (and other vegetables) in pots is also a great way to make the most of a limited space.

Choose a pot that’s about 1ft wide. A larger pot encourages growth, meaning a heavier yield. It’ll also require less frequent watering. The pot should be clean and have drainage holes in the bottom.

Fill it with fresh multi-purpose compost mixed with peat moss and vermiculite. Adding vermiculite, sand, or perlite, will improve drainage.

Place each plant 2in deeper than its previous depth. This encourages more roots to form and improves water and nutrient uptake. Once planted, water in and mulch. Place the pots in a sunny location, where the peppers aren’t shaded by other plants.

Bell pepper plants are relatively to care for as long they’re able to enjoy warm soil and warm temperatures.

Water the plants regularly, keeping them evenly moist.  Allowing the plants to dry out, especially when they’re flowering, could damage the crop.

Apply a dose of high potash liquid fertilizer, such as tomato feed, once the first fruit has set. Keep feeding as per the instructions on the packet.

Once flowers emerge, some people spray the plants with a solution on 1 tablespoon of Epsom salts diluted in a gallon of water. Like tomatoes, this encourages larger, sweeter peppers to form. Re-apply the solution 10 days later.

If the plants exceed 14in in height, pinching out the growing tips will encourage bushier growth and prevent legginess.

Don’t over prune the leaves. This can leave fruits unprotected and prone to sunscald. Additionally, only deadhead if the flowers emerge too early, before the plant has grown to a good size. You can also deadhead to stop new fruits from forming, and to encourage established fruits to mature.

Since they’re shallow-rooted plants, bell peppers are prone to toppling when heavily laden with fruit. Support the plant with stakes or tomato cages to avoid this, but tie the stems and branches loosely to prevent damage. Staking has the additional benefit of keeping the fruit off the ground, where it can potentially rot or be attacked by pests.

Common Pepper Problems and how to solve them

Aphids will often make bell pepper plants their home. Wash away infestations with a hose pipe.

If you are growing in undercover, glasshouse red spider mite may target peppers. Thriving in hot, dry conditions these pests mottle leaves and cover the plants in webbing. Misting regularly will remove most infestations.

Both root rot and phytophthera, a fungal disease, can affect peppers. These are usually caused by over-watering or poorly draining soil. Additionally, crop rotation can reduce the chances of phytophthera striking.

Bell peppers suffer from many of the same diseases as tomatoes. One of the most common is fusarium wilt, which causes the plant joints to turn black. Prune away infected parts, sterilizing the tools after use. Just note that if the soil becomes infected, it can be difficult to cure. This is why a crop rotation system is so important: it keeps vulnerable plants safe from any infected soil.

Sunscald is most common during hot periods, and damages the peppers’ appearance. The fruit can also become tough or woody. In the worst cases, sunscald causes peppers to crack and become infected. While some varieties are resistant to this issue, healthy plants are less prone to it in general.

Bell pepper plants either not flowering or fruit falling from the plant, is a common problem. Since these are temperature-sensitive plants, exposure to overly warm or cold conditions can cause fruit to fail. Growing the plants undercover, where you can better control the temperatures, is the easiest solution.

Poor pollination can also prevent flourishing. This is solved by planting pollinator attracting flowers near your peppers. Poor air circulation, over fertilizing, and inconsistent watering can also cause of fruit failure.

Companion planting is a great way to encourage healthy, heavy-yielding plants. In addition to discouraging pests and disease, it can also look great in the garden.

Most herbs make good companion plants for bell pepper plants. Basil will ward off pests such as thrips while parsley and dill attract beneficial insects and repel pests.

Alliums, carrots, cucumbers, squash, eggplants, and radishes all thrive when grown alongside peppers.

Spinach, chard, asparagus, and lettuce can be used as smother crops, helpfully crowding out weeds. Beets and parsnips are also great space fillers, deterring weeds and helping to keep the soil moist. Taller plants such as beans, and peas, can be planted at the back of a plot to act as a windbreak and will also add nitrogen to the soil.

Flowers such as nasturtiums, geraniums, petunias, and French marigolds are all great companion plants. Not only will they add color to your garden, they’ll attract pollinators while deterring harmful pests and insects.

Bell pepper plants struggle alongside a number of plants, particularly members of the brassica family. They also seem to dislike fennel. Don’t plant peppers near apricot trees, since they’re both susceptible to the same fungal diseases.

Harvest bell peppers either when they’re young and green, or when they have matured and turned red. Allowing the fruit to mature can improve the flavor but will reduce the plant’s overall yield. Matured plants will be sweeter and higher in vitamin C.

If the fruit is slow to mature, remove some of the leaves, allowing more light to reach the pepper. To harvest, either use a sharp knife or secateurs to cut the fruit away from the plant.

Bell peppers are best used fresh. If you have a surplus, you can store them in a plastic bag in a refrigerator for up to 10 days. They can also be dried for long term storage.

To dry them, wash, core and remove the seeds from the peppers. Then cut the peppers strips and steam for 10 minutes. Then, spread the peppers on a baking sheet and dry in the oven at the lowest possible temperature until they become brittle, turning occasionally. Once cool, the peppers can be kept in bags or storage containers.