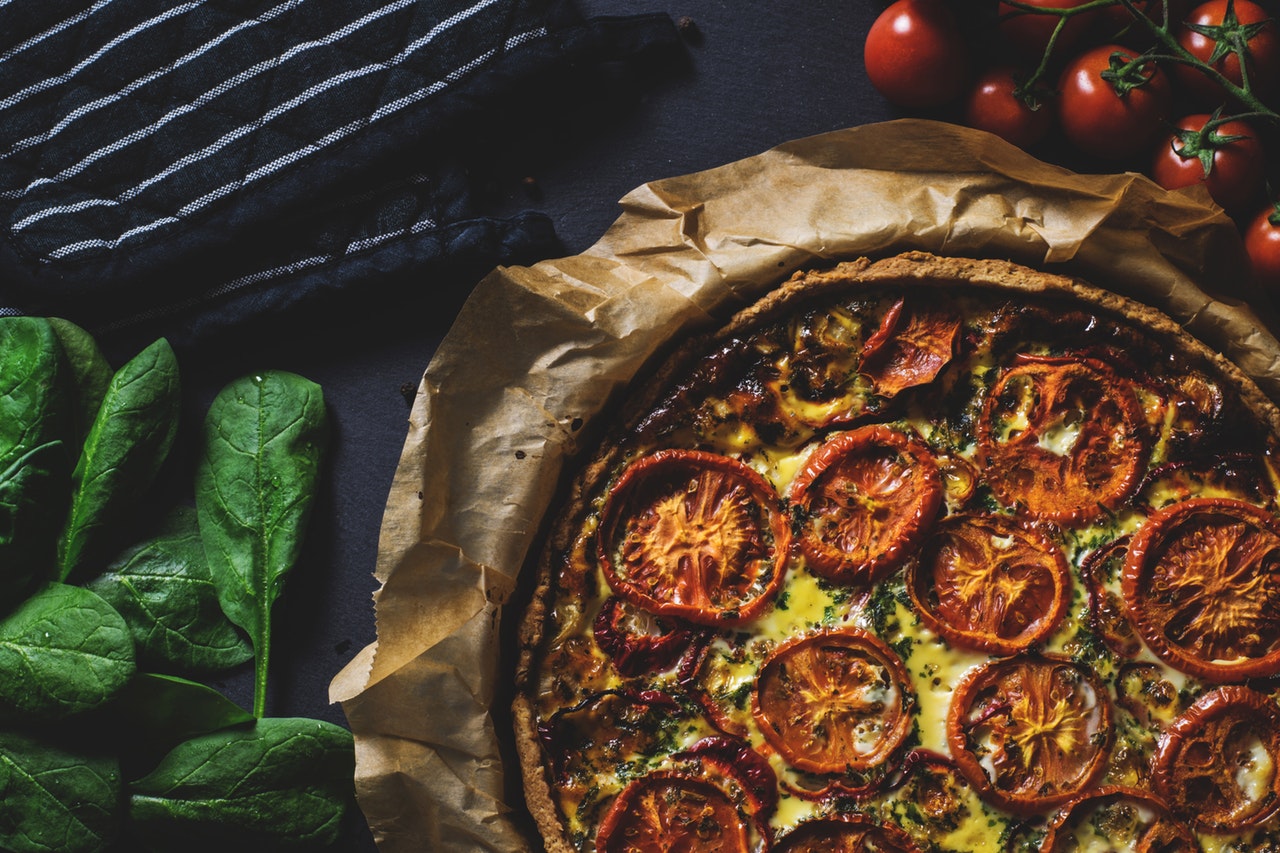 For me, sweet, fresh-off-the-vine tomatoes embody the taste of summertime. A healthy, vitamin-rich crop, tomatoes are also an incredibly versatile ingredient, adding flavor to sauces, soups, pastes, and purees. Since crops can be abundant, we don’t want to allow any of their goodness to go to waste! Dehydrating tomatoes is an ideal option for saving their deliciousness to use at a later date.

A Step-by-Step Guide to Dehydrating Tomatoes

If, like me, you grow your own tomatoes, then you know the frustration that comes at the end of the growing season when you are faced with a glut of them. Instead of watching them go to waste, why not preserve them instead? Dehydrating tomatoes is a great, healthy way to make sure that a bumper crop doesn’t go to waste. It’s also incredibly easy. Read on to learn how to do it.

Which Tomatoes are best for Dehydrating?

While some people prefer to use meaty varieties such as Romas, when it comes to dehydrating tomatoes you can use any variety you like. This is good news for gardeners with a glut of the crop. Just make sure that you use firm, ripe tomatoes.

If you plan on using yours to make sun-dried tomatoes, then it is better to use paste or plum varieties such as Amish Paste or San Marzano. These aren’t as juicy as other cultivars, meaning that they’ll dry more quickly, and have a denser flesh.

Wipe down the preparation surface and clean any knifes and other utensils you plan to use. Then, wash your hands and dry them with a clean towel. This will prevent the spread of germs and bacteria.

You’ll also need to wash your tomatoes. The easiest method is to soak them in a big bowl of clean water with a cup of vinegar stirred in. The vinegar’s acidity will help to clean the fruits’ skins.

Step 2: Should I Remove the Skin?

You may opt to remove the tomato skins before slicing. Some people like to leave the skins on because they can provide a bit of support to the fruit when dehydrating. Tomatoes will naturally separate from their skins when rehydrated or used in soups, so I would advise leaving it on.

Additionally, if you’re dehydrating tomatoes that are smaller than usual, such as cherry tomatoes, it’s easier to leave the skin on.

To remove the skin, cut an X into the tomatoes’ bottoms and dip them into a saucepan or bowl of boiling water for a few seconds. Their skins should just slide right off afterwards.

Use a sharp, serrated knife to cut your tomatoes quickly, and neatly. If you’re dehydrating small varieties, simply cut them in half. While it may be tempting to dry small tomatoes whole, I advise against it, This is because you won’t be able to see the fruits’ insides, so you can’t tell when it’s fully dry.

Larger tomatoes can be quartered or cut into slices about half an inch thick. Don’t slice them too thinly, because thinner slices can dry unevenly. The slices should be as uniform as possible to dry evenly, and at roughly the same time.

As you cut the tomatoes, you may opt to remove the seeds and save them for planting next year. Again, this is entirely up to you. Blot any excess juice with a kitchen towel.

If you intend to make sun-dried tomatoes, just cut them in half. Remove the stem portion, leaving a cup-like shake. Keeping the tomatoes cut-side up means that the skin will keep the vital juices inside the fruit. The more juice you retain, the richer the flavor.

Tomatoes have to be set properly to get the best results when dehydrating.

Spray the dehydrator trays with a thin coat of vegetable spray to prevent sticking. Alternatively, rub them with a bit of olive oil.

Carefully place the tomatoes flat onto the tray. Don’t overlap the slices, as this can prevent air from circulating and hinder the drying process.

Place halved tomatoes skin-side down. This will prevent their juices from dripping down onto other trays.

Season with salt, fresh herbs, garlic powder, or whatever you prefer.

Turn on your dehydrator and set it to the right temperature. Generally speaking, cherry tomatoes will be at 113ºF, while larger tomatoes will be in at 135ºF. This varies depending on the make of dehydrator, the amount of tomatoes, and the variety. Check the dehydrator’s instructions before switching it on.

The length of time the tomatoes need to be in the dehydrator will also vary. Depending on the size and amount, dehydrating tomatoes can take between 6 and 12 hours.

While it may be tempting, don’t turn up the temperature in an attempt to speed up the process. Doing so will lead to the tomatoes losing lots of nutrients and flavor.

Most dehydrators will continuously circulate warm air, but very few do this uniformly. That means that some trays will dry faster than others. To achieve uniform drying, you need to rotate the trays every few hours. Don’t attempt to move the tomatoes individually as they turn gooey during the process. Just move the trays instead.

If you’re drying larger tomatoes, removing alternative trays will give them more room. It’ll also help the air to circulate more evenly. The tomatoes will be brittle or leathery once fully dry, and will have also reduced in size. No moisture should appear when pressed.

If the tomatoes feel tacky, leave them in the dehydrator for a little while longer. Once they’re fully dry, remove them from the machine and place them on a flat surface where they can cool completely.

Dehydrating in an Oven

You can also try dehydrating tomatoes in an oven. To do this, prepare the tomatoes in the same way and place inside an oven preheated to 170°F. Let them sit in there for around 3 hours. During this time, leave the oven door open slightly to allow the moisture to escape.

Use a spatula to flip the tomatoes over so they’re cut-side down. Return them to the oven and bake until dry. This will take about 8 hours, but will vary depending on the size and moisture content. During this period you need to turn the tomatoes every few hours, and flatten them with the spatula.

Store your dehydrated tomatoes in an airtight container once fully cooled. A clean jar is ideal, as are sealable plastic containers or zip-locked freezer bags. If placing in freezer bags, be sure to push all the air out as you seal them. They can be kept in this condition for several months.

If you want to keep the tomatoes for a longer period of time, then place them in a refrigerator or freezer.

You can also pack the tomatoes in olive oil.

To do this, dip the tomatoes into a small bowl of red wine vinegar, using tongs to make the process less messy. Allow the excess vinegar to drip off before placing the tomato in a jar. Repeat this process until the jar is full. Don’t be afraid to press the tomatoes into the jar, as doing so will force out air and enable you to fit more in.

Once all your tomatoes are in, carefully pour in enough olive oil to cover them all. Then store the jar in a dark, cool place.

As you use the tomatoes, be sure that the remainders are fully covered with oil before returning the jar to a shelf. This will keep them from going moldy.

You can also flavor them by layering them with garlic cloves, fresh basil leaves, rosemary sprigs, and a dash of salt, pepper, dried basil, and dried oregano. Once layered cover with olive oil as with the process mentioned above.

You can also grind up dehydrated tomatoes in a blender to make tomato powder. When fully blended, the tomato powder can be stored in an airtight jar.

Keep the jar upside-down for a couple of days, and check it occasionally for moisture. Seeing moisture in the jar means that your tomatoes aren’t fully dehydrated. If it appears, store the jar in the freezer until you need it. If no moisture is visible, the jar will be fine on a shelf.

You can re-hydrate the powder with some water and use it to thicken up tomato bases for soups or stews. It can also be used in sauces or pastes.

Dehydrating tomatoes is the most effective way to preserve a huge crop, and it also boosts their levels of vitamin C and K, as well as thiamin and niacin.

The dehydration process can be lengthy, as these fruits are almost 95% water. It’s well worth the effort, however, if you want to continue enjoying your luscious homegrown tomatoes throughout the dark winter months.