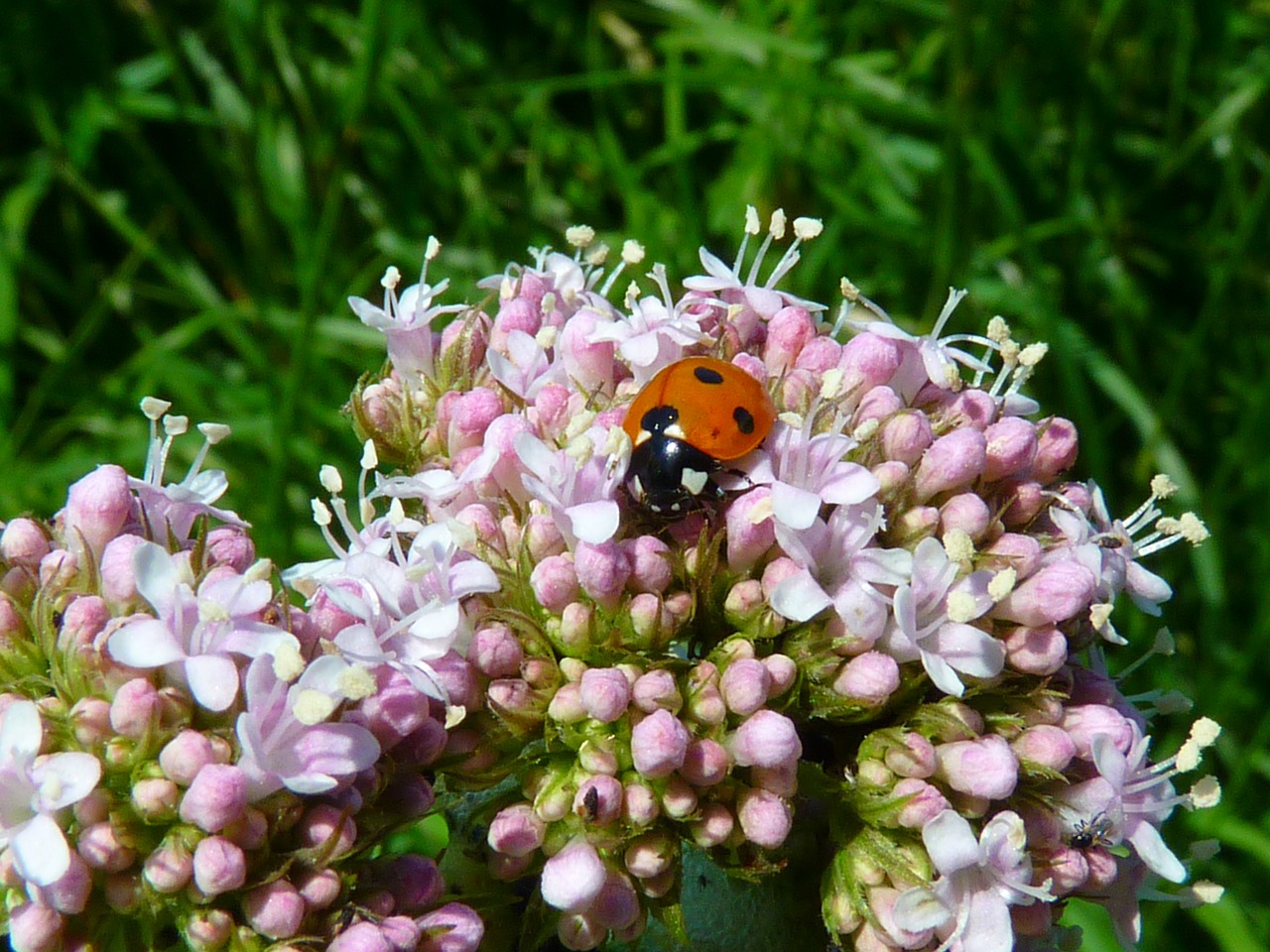 Do you struggle with insomnia at times? Is lack of sleep causing you to cancel plans, or lash out in frustration? For most of us, stress and insomnia are going to intrude at some point in life. Lying awake for hours is exhausting, and can disrupt sleep patterns for days. When the clock is ticking, and chamomile tea just isn’t calming your mind, the sweet, herby valerian plant can help soothe you to sleep.

If you live anywhere between growing zones 4-7, valerian can thrive in your garden! You can spend summer evenings sipping fresh, herbal remedies, and winter evenings relaxing in a valerian bath. Let’s take a look at this hardy, calming herb so you can add it to your herb garden and home apothecary.

Valerian is one of the most powerful herbal sedatives available. Additionally, unlike Ambien, or benzodiazapenes like Valium, valerian is safe and non-habit forming.

This herb has been used as a sedative for millennia. In fact, both Hippocrates and Galen were fond of it as a cure for sleeplessness and to calm nerves. Over 2,000 years later, we’re still using it to welcome in dreams and drive away anxiety.

The valerian plant (Valeriana officinalis) doesn’t just calm and sedate. Medieval grooms pinned its flowers to their clothes to turn away the envy of fairies. Puritan preachers prescribed it to calm hysterics, and peasants added it to warming winter stews to alleviate what we now know as seasonal affective disorder (SAD).

From headaches to plague, valerian has been used to cure centuries of sickness, earning the nickname All-Heal.
It grows an average of 4 feet tall and blossoms into creamy white, fragrant flowers. Bees love gathering around valerian, so do cats. They can’t get enough of the musty, earthy scent of valerian roots, which seem to affect them the same way catnip can.

This spreading perennial is a garden staple, and is also a useful addition to your herbal medicine chest. Best of all, like so many traditional healing herbs, a valerian plant is easy to grow and requires little maintenance.

The easiest way to start valerian is by dividing the roots (or rooted runners) that grow out from an established plant. Valerian rhizomes spread quickly and easily, so if you know of someone with an established plant, ask for a few roots in spring or mid-autumn.

Valerian isn’t always easy to start from seed. The seeds tend to be picky, with a low germination rate. If you do buy seeds, plant them right away so they’re as fresh as possible.

Plant your seeds in nitrogen-rich, well-worked soil, and cover them with light layer of the same soil. Keep those seeds moist, but not drenched. Even, consistent moisture is essential for valerian to germinate.

If all goes well, your seeds will germinate in 7 to 10 days.

You can start valerian seeds outdoors just as easily as indoors, as the seeds are frost-hardy. But since they need to be planted close to the surface, it’s good to watch out for birds. Valerian’s low germination rate doesn’t get any help from hungry songbirds!

When your seedlings are stable and growing well, it’s time to space them out. Remember that these plants grow tall and flare out. You want to make sure there is about 3 feet between each plant.

Valerian likes wet ground, so keep that in mind if you’re transplanting. Plant in the lower, wetter areas of the garden. In dry weather, water valerian regularly to keep the ground moist. Find a spot with lots of sunlight, but some shade too, especially in the hot, afternoon sun.

Because valerian spreads underground, through rhizomes, it’s important to give it loose, deep soil that is fertile and well drained. Ideally, try for a neutral pH for optimal growth.

Weed regularly, especially while the plant is young. Valerian doesn’t like competing for water or soil space. I can thrive despite encroaching weeds, but let’s not put too much pressure on this gentle plant. Keep the surrounding area low on competition so your valerian plant can grow in peace.

Like most traditional herbs, valerian doesn’t attract many pests. Bees and butterflies love the valerian’s little flowers, but destructive insects tend to stay away.

Sometimes, however, valerian can attract neighborhood cats. They love the musky scent of valerian root and love to dig and scratch at the plant. If you start to have consistent issues with cats and other visitors, try scaring them away with the scent of a predator.

While a predator scent spray may seem like a strange addition to an herb garden, surrounding your plants with a hostile scent will keep smaller, domestic animals at bay. Don’t worry, human noses aren’t strong enough to detect the scent. The neighborhood cats will smell it though, and find other gardens to harass.

Valerian pairs well with low, mounded herbs like thyme and oregano. It also loves to share space with echinacea, catnip, and dill.

Remember when you’re choosing companion plants that valerian can grow up to 5 feet tall. Plant it behind smaller plants so that it doesn’t cut off the sunlight. Up against a wall or fence, with there lower plants in front is ideal.

You want a permanent stand of valerian, so wait a couple years after planting to allow your valerian to establish itself. The plant needs time to spread before you can sustainably harvest the roots. When you have a nice cluster of valerian plants, you can harvest a few roots without fear.

If you’re harvesting for headache relief, harvest the whole plant. Most growers, however, choose to use just valerian root in their herbal remedies.

In the fall, pull up one or two plants. Grasp them gently right above the roots and pull slowly to keep the root as intact as possible. Many valerian growers find the plant more potent when the root is undamaged.

Shake as much dirt off the roots as possible, then gently rinse them off. You want clean roots, but you also want to avoid scrubbing until right before using them.

While you can dry valerian root, try using it fresh as often as possible. The fresh root is much more effective than dried.

How do you use valerian root? There are so many ways!

It can also be taken to soothe anxiety, but don’t drink and drive! Valerian can be a powerful sedative. It’s better to consume this tea at home or with a designated driver.

What About the Flowers?

Valerian flowers are fragrant and refreshing. As they blossom, you can pick a few and crush them to release a heart-lifting scent.

I like to throw a handful of valerian flowers in a pan of water on the stove. Set the stove on low so the water can heat slowly. Then add in some rose blossoms, and lemon verbena, and let the water steam up to scent the air.

Make a valerian root tincture by filling a small jar with fresh valerian root and covering it with vodka. You can use other, high proof, neutral spirits as well. While vodka is popular for tinctures, rum is a great choice for disguising the musky flavor of valerian root.

Seal the jar and set it in a cool place for two weeks, shaking occasionally. When the valerian root is done steeping, strain it out. The infused alcohol is your tincture.

Use the valerian tincture as a sedative. It can treat insomnia, anxiety, and stress-related high blood pressure.

You can also add 1 part tincture to 4 parts raw honey for an effective cough remedy. Try steeping some licorice and hyssop in your valerian tincture before mixing it with honey. This highly effective combination will break up really persistent, chesty coughs.

You can wash yourself in an infusion of valerian root as well. Add some fresh or dried valerian root to the bath water for a long, soothing soak. Or brew up a strong valerian tea and soak out a splinter with it.

Valerian is a great herb for drawing out stings and splinters. Add some fresh plantain leaves to the mix for an intensified effect. You’ll be surprised at how quickly that splinter comes out!

Despite its height, valerian is a humble, easily overlooked herb. We tend to ignore it on roadsides or next to flashier flowers in the garden. But valerian is like that soft, heavy quilt your grandmother made. A little bit musty, a little bit neglected, and on spooky, sleepless nights, absolutely essential.

When you plant your herb garden, don’t neglect valerian. You may not need it this year, but some night in the future, you’ll be grateful for having grown it.