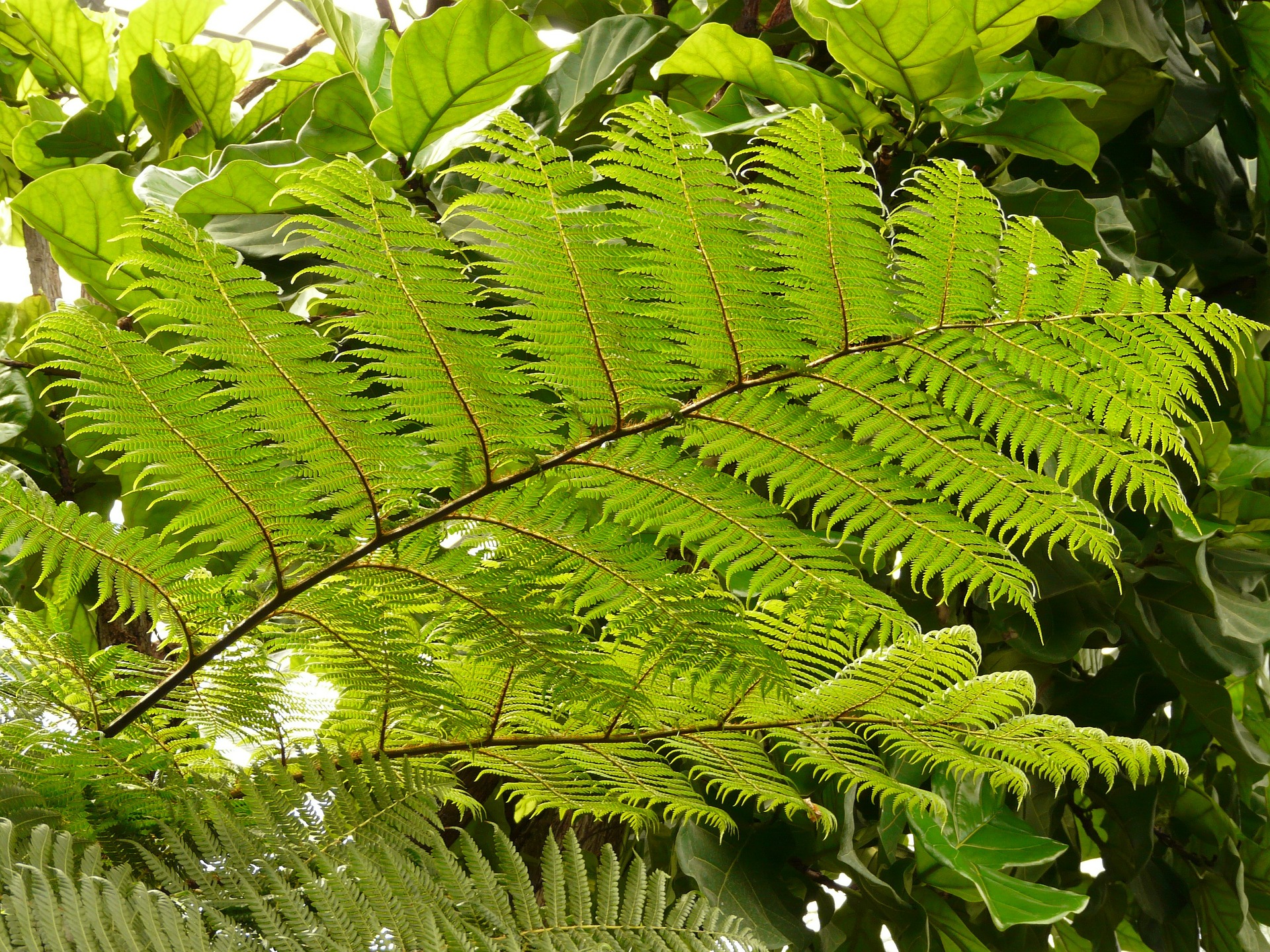 Some of my most favorite plants are foliage plants, naturally destined for shadier areas of the garden. From the view of decorative foliage plants, the great fern is one of the main contributors. They possess an extraordinary diversity in form, size, growth habit, complexity and color range, which no other class of plant equals. Read on to learn about the most wonderful types of ferns you can cultivate.

Nowadays, Ferns are merely regarded as decorative, flowerless plants.  In years gone by, however, fern collections were an important feature in wealthy people’s gardens. To fully understand the greatness of these wonderful foliage plants, let’s dwell a little upon their history. By doing so, we can see how this fascinating plant group has evolved from the Fossil Age.

The History of Ferns

Ferns appeared long before the first flowering plants evolved. This was in the middle Devonian Era, approximately 360 million years ago. In fact, early fossil records show that that giant tree ferns and Cycad palms were the only plants on Earth for literally millions of years.

Many of the main sources of energy we use today, such as coal, gas and oil deposits are directly formed from deep, residing layers of organic plant matter, namely that of these ferns and Cycad palms.

How is this so?

Over millions of years, the plant matter accumulated to such a depth that they were deposited in thick layers. When combined with the Earth’s heat, then compressed, and finally converted into what we know as “fossil fuels”.

So how many Fern Species are there?

There are over 12,000 types of ferns that have been identified to date. That said, new discoveries are being made every year, therefore the actual number of Fern species may be far greater.

The only continent without Ferns is Antarctica. Meanwhile, Mexico has one of the most diverse fern floras of the whole world, with over 1000 species. Nearly 20% of those species are endemic and found nowhere else in the world.

How old are the Fern families we see today?

Most of the “modern” fern families we see today first came about in the Late Cretaceous Era. This was some 45 to 50 million years ago, during the Jurassice era. Not so modern then, really.

From around 1880 to 1900, everyone in England was “fern crazy”!  Ferns were highly collected natural artefacts.  In fact, fern-finding expeditions were commonplace among city dwellers. They explored their natural woodlands, stripped them of interesting cultivars and took these back to their homes and estates.

Furthermore, fern motifs were extensively used on furniture, pottery, arts and craftwork. Likewise, many books studying this “pteridomania” were published, and new plant varieties were found and named. This was such a phenomenon that many books have been written on the period.

Now that we have a better understanding of ferns’ history, let’s take a look at some of the best foliage specimens for your garden.

10 of the Best Frost-Hardy Types of Ferns

The “Cristata” is one of the finest types of ferns in the Dryopteris family. Bushy and robust, this semi-evergreen specimen grows to around 1.5 meters in height and spread. Its tall rosettes of erect, then arching, bipinnate fronds have crested tips and pinnae. These pinnae are the divisions in the leaf blades, or fronds.

This Dryopteris variety is also known as “Cristata the King of Ferns”. It has great, vibrant color and leaf structure, aptly fitting its noble name.

This is the lone species of the Matteuccia genus and one of the greatest structural ferns in my list. In Ancient Greek its name translates to “Ostrich Fern”, referring to its great stance. I personally call it the “Shuttlecock Fern”, because they have a similar shape once semi-mature.

This is a deciduous, epiphytic fern, natively found growing in trees and nestled between rocks. It has a rhizomatous root system that creeps along the ground. Colonies of erect, shuttlecock-like rosettes are produced with pinnately divided, lance-shaped, spreading fronds.

These fronds are bright green in hue and surround the centre of shorter, brown fertile fronds. With a mature height and spread of 1.5 meters x 2.5 meters, this is one fern bound to get noticed. Whether planted individually or in a group, the Shuttlecock fern brings both drama and beauty to the garden.  A real winner.

The “Proliferum” is part of the Polystichum fern family. These are commonly known as “soft-shield ferns”. This particular cultivar has a vigorous growth habit with semi-erect, hardy, double-pinnate fronds produced in profusion.

Each frond has small, toothed leaflets along the midribs, resulting in a lush, bushy semi-evergreen fern. In maturity, it has a height and spread of just over half a meter.  The ferns colour is fresh  apple-green which looks amazing group-planted with dark ground cover plants such as Ajuga “Black Scallop”.

The first variety, “Ursula’s Red”, has a low, spreading form, reaching a height of just 0.4 meters. However, over time, this beautiful painted lady fern will form low-growing clumps and spread up to 1.2 meters. Newly emerging fronds have distinct purple-bronze tones with a dusty, silvery topping of silver dust.

As the fronds mature, their purple hue lessens, taking on a green tone with similar silver dusting. The ferns’ midribs and veining remain a deep shade of purple, resulting in a striking color combination. As a result, it’s a valuable asset to any woodland or mixed border.

I have this variety in my garden, contrasting against green Hostas and bright green Escallonia “Golden Ellen”.  The effect is striking.

The “Metallicum” cultivar is superb for delicate and unusual foliage color. Grown purely for its ornamental value, this delicate deciduous fern forms a rosette of silvery grey, lance-shaped, arching fronds. It has a clump-forming habit, growing into great colonies when established.

It has a mature height and spread of around 45 cm.  Its metallic fronds have delicate burgundy veins and mid-ribs. As a result, it offers a truly spectacular show from spring through to late Autumn

The Japanese Wood Fern is another beauty from the Dryopteris family.  As the name suggests, these types of ferns are copper-tinted, semi-evergreens native to eastern Asia. When mature, they reach a mature height of about 75cm to a meter.

They have compact, clump-forming growth habits with upright, pinnately divided fronds. In infancy, these fronds are a wonderful coppery-pink tone. These later mature to fresh apple green with coppery-pink spore heaps.

I have many of these ferns planted in my garden, some in full shade and others in semi-shade. Regardless of orientation, their fronds are fresh and bright throughout the whole season making them another fine foliage choice for your garden.

The “Cinnamon Fern” is an impressive North American deciduous fern  Its common name refers to its small, brown fond plumes, which shoot up from the center of the plant. Erect, lance-shaped, light blue-green, sterile fronds grow around these fronds.

The “Royal Fern” is sometimes known as the “flowering fern” with reference to its flower-like central fertile fronds. This deciduous variety has a unique growing form and gentle texture. It also prefers consistently moist, humus-rich soil.

It has green, huge and erect bi-pinnate fronds. These form large clumps of elegant, vase-shaped foliage and the fronds gently arch over. This stunning fern reaches a height of around 2.5 meters, with a spread half this size. In autumn, the fronds turn a lovely red-brown shade. This adds beauty to almost any semi-shaded outside space.

Also known as the “Japanese Holly Fern”, this is the hardiest variety in the genus and has a neat, clump-forming habit. Unlike the rest of our ferns in the “Top 10”, its fronds have much bolder leaflets and less of a lacy texture.

Their leathery bright green fronds arch gracefully from distinctive, black-colored stems. This is a semi-evergreen fern with an upright growing form. Plant this in rich, humus-rich soil in a moist, well-drained, shady site. This is a perfect fern for container planting or in a woodland border with other, more delicate fern varieties.

Although not fully frost-hardy, this evergreen tree fern can survive the winter weather. Just give it some TLC in autumn and it’ll subsequently produce new fronds the following spring. It would be a crime not to include this gigantic specimen into our “Top 10” list. It’s one of the largest structural tree ferns available and consequently breathtaking.

For fern fanatics, like myself, the sheer size of the beast is more than impressive. It typically reaches around 5 meters in height, and on up to 15 meters. The “trunk” of this fantastic beast is an erect rhizome root system. This dark, hairy pre-growth forms a medium through which the roots grow.

It has large, tough, green, roughly textured fronds. They’re borne in flushes with fertile and sterile fronds in alternating layers. A fully open frond canopy can easily cover a diamteter of 2–6 meters. In its Australian homeland, the “Dicksonia” tree fern grows on damp, sheltered woodland slopes and in moist gullies.

Plant your tree fern in nutritious, organic soil and keep it well-mulched and watered. Don’t remove the fronds in late autumn. Instead, cover the top of the trunk with a blanket or fleece until early spring. You can remove the old fronds the following spring.