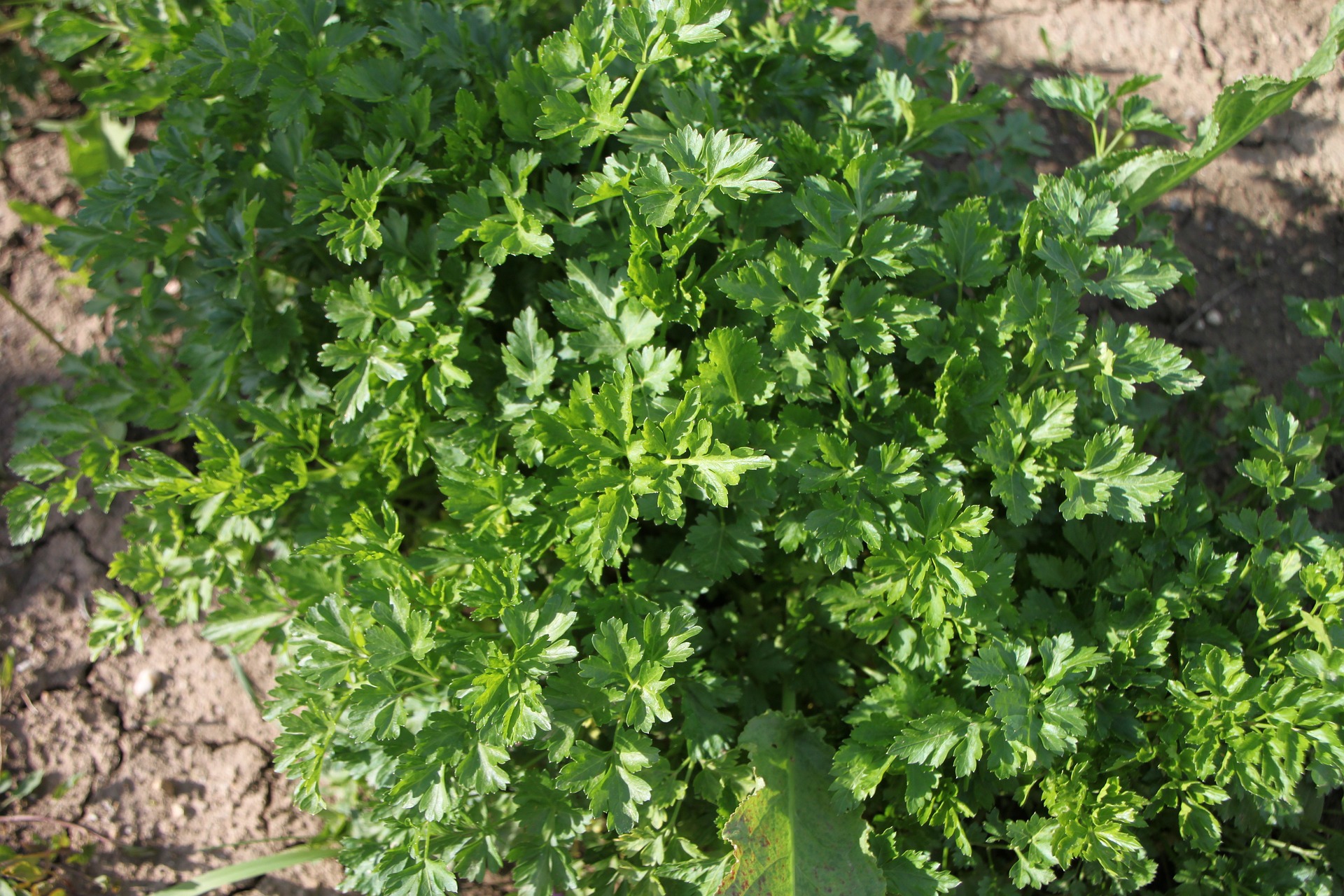 If your childhood was anything like mine, you grew up limiting your interaction with parsley. It appeared beside festive fish dishes or tucked atop restaurant soups, but that’s it. The lowly parsley plant was merely a green garnish you discarded almost immediately. This tough, leafy bundle tasted like a grass, but looked pretty in contrast to lobster bisque’s creamy orange, right?

Why do people even put parsley on the plate? Why don’t we garnish with something delicious, or even just edible? If you’ve ever caught yourself dismissing the humble parsley bundle, think again! This little herb has a history rich in both health and lore.

What is this long-neglected herb, and how did it rise and fall in the hearts and minds of gardeners around the world?

Once Upon A Time…

A parsley plant bundle was carried in the hands of Persephone, the goddess of the underworld. Even when she walked out under the sky in the summertime, she carried the herb of the dead in her hands. The Greeks believed that welcoming parsley into the house would welcome death in as well. As a result, they kept parsley out of the houses, and instead hung it on tombs to entrust their dead to Persephone’s care.

Even up through medieval times, many people believed that a parsley plant could be used in death spells. In fact, folklore considers parsley to be one of the herbs most connected to death and dying. It was said that only witches could grow this fresh little herb well. Well, witches, and pregnant women—especially in the middle ages, when the risk of dying in childbirth was higher.

It’s said that witches would pluck a sprig of parsley while speaking the name of an enemy to kill that person. Alternatively, they’d wash themselves with parsley water before attempting to communicate with the dead.

Unlike so many herbs associated with luck and magic, parsley has a decided dark streak. It attracts witches and is attracted to them, instead of repelling them like yarrow and garlic. But, along with its dark, dangerous side, parsley is a wellness ally.

So don’t worry: the kitchen team at your local restaurant probably isn’t whispering your name as they pluck your garnish from the ground. The death-laden folklore surrounding the humble parsley plant isn’t it’s only claim to fame.

Parsley first began decorating plates during the Roman era. In fact, the notoriously over-indulgent Romans would eat a sprig of parsley after their epic meals. oman aristocrats were famous for devouring huge quantities of rich food, then vomiting, and returning to eat even more.

They needed a sprig of something fresh and soothing to follow up such exhausting meals. Parsley’s anti-bloating effects and breath-freshening flavor were exactly what those party guys needed after their night of indulgence.

Now, hopefully you’re not partying like a Roman senator, but give the garnish a try. Parsley does freshen breath and aid digestion. But that’s not all the ubiquitous sprig of green is good for!

Parsley is a vitamin-packed powerhouse of after dinner delight. It’s full of essential vitamins like A, B, C, and K as well as the minerals iron and potassium, so it doesn’t skimp on the good stuff. But parsley isn’t just a bundle of nutrients: these refreshing greens also act as a gentle diuretic.

This herb reduces both water retention and the bloating that comes with it. Because it’s rich in potassium, it’s one of the few diuretics that won’t deplete your potassium levels. The parsley plant is so effective as a diuretic that it’s become a popular weight loss aid.

Deep green parsley is also rich in chlorophyll. Chlorophyll, you may remember from your high school science class, is the substance that makes plants green. It’s an essential part of the process of photosynthesis. Chlorophyll is also deeply detoxifying and aids in weight loss.

Many fitness experts combine parsley and lemon juice with room temperature water for a early morning tonic. Those who use it claim fantastic results from the morning ritual of drinking a cup of parsley lemon water.

Parsley’s popularity as a weight loss aid will can obscure its other healing aspects.

That’s right, the parsley plant fights cancer. Eating that little garnish after your meals can reduce your risk of developing a variety of cancers. This herb is full of a flavonoid called apigenin, which is a substance that naturally inhibits cancer cells.

Apigenin is also an antioxidant and anti-inflammatory, like blueberries. In fact, a blueberry, parsley, and lemon smoothie would be a great way to boost your nutrients in the morning, especially if you have a family history of cancer.

Hold onto that smoothie—you may want to keep drinking it all summer long! If you suffer from seasonal allergies, parsley is your new best friend. It’s known for regulating the immune system, which means that parsley doesn’t just encourage your immune system to react when it needs to. It actually calms down over-stimulated immune systems too.

So if you have allergies, autoimmune issues, or chronic inflammation, a parsley plant can help talk down your immune system. Try starting the day with parsley-lemon water or that parsley-blueberry smoothie. Or end your day with a parsley and burdock bath. But watch out for ghosts! Remember that the medieval witches used those same baths to converse with the dead.

Arthritis is an inflammatory issue, and we already know that parsley is full of anti-inflammatory properties. Specifically, an oil named eugenol. This volatile oil can significantly reduce swelling in arthritic joints.

Even if you’re arthritis isn’t acting up right now, getting regular parsley in your diet can help keep arthritic swelling at bay.

Parsley is a popular choice for treating diabetes in Turkey, but it’s rarely used in the States. In fact, it has been used consistently and successfully to reduce blood sugar levels. If you’re in the pre-diabetes stage, using parsley on a regular basis can help keep you from developing type-2 diabetes.

Specifically, consuming this herb with your meals can help your body process sugars in a healthier way. Maybe that’s why restaurants tuck a sprig on their laden plants!

It’s no secret that our modern diet is wrecking havoc on our blood vessels. In fact, heart attacks and strokes are some of the biggest killers in America. One of the best ways to protect healthy circulation is with folate. This is one of the B vitamins that parsley is so rich in. Folate helps to reduce homocysteine, and homocysteine is the amino acid that damages blood vessels.

You see, homocysteine occurs naturally in our bodies, but when it gets elevated, it can cause a lot of problems. But a little bit of parsley can go a long way toward balancing out our homocysteine levels and keeping those blood vessels healthy.

Too Good to Be True?

The humble little parsley plant is pretty impressive isn’t it? Who knew a simple garnish could do so much good? But with the garnish is a safe and effective addition to your dinner, there are definitely times to avoid using parsley in medicinal doses.

Parsley isn’t safe to consume consistently in pregnancy. Go ahead and eat that garnish, it won’t hurt you or your baby, but save the parsley-lemon water for another time.

It’s is a uterine stimulant, and it has been known to cause birth defects if used medicinally during pregnancy. Parsley can also inhibit clotting, which increases the risk of excessive bleeding after birth.

If you feel like your body is retaining water during pregnancy and you really want an herbal friend to help reduce bloating and swelling, just try drinking more water. In addition, you can mix a teaspoon of raw apple cider vinegar into a glass of water to help balance electrolytes and boost potassium.

If you have a kidney disease, don’t use parsley medicinally without the oversight of a qualified herbalist. Parsley increases kidney function and can help the kidneys detoxify the body. In fact, for a healthy kidney, parsley is a great boosting herb.

But, if you have kidney disease, this boosting aspect may cause problems. Use it for kidney health with care, and if you have any concerns about your kidneys, talk to a knowledgeable herbalist before consuming.

Can You Overdose on Parsley?

Yes, you can. Parsley is a very healing plant, but too much of a good thing is often unhealthy. Keep your consumption moderate.

If you’re using it medicinally, you will want to take a break every 10 days or so. Try consuming parsley for 10 days, then taking 10 days off to give your body a chance to process all the nutrients you’ve consumed.

Using parsley as a food-based medicinal herb is a great way to avoid overdoing. Add it to smoothies or mix up a batch of tabbouleh. Including small amounts of parsley into your daily diet will allow you to consume it safely and allow it to help heal your body.