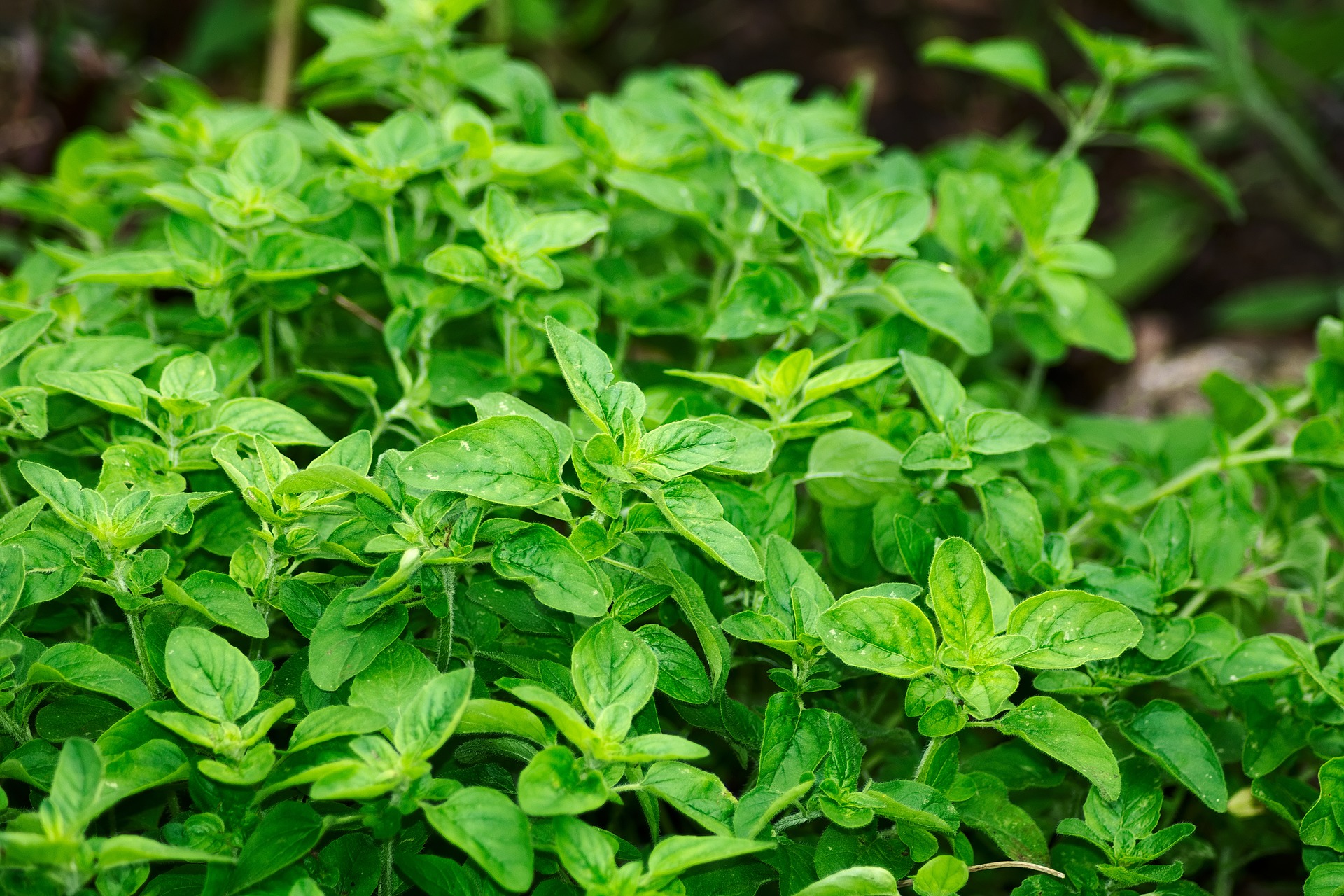 I started growing an oregano plant after a dear friend visited Greece. She brought me back a white, linen bag – embroidered with gold – full of newly dried oregano. It was nothing like the dull, grocery store seasoning I’d grown up with. Read on for tips on how to grow your own, and keep it healthy and happy.

Oregano By Any Other Name…

Homegrown fresh, or newly dried oregano is amazing. Suddenly, you understand why this aromatic herb is a staple of Mediterranean cooking. It’s an intense, woodsy, well-rounded herb with a zing of spiciness. Ever since I opened that pretty white and gold bag, I’ve kept a pot of oregano close at hand. I use it on everything from roasted veggies to goat stew, and you can too! Oregano is incredibly hardy, and easy to propagate from cuttings or division.

When I talk about oregano, I mean Origanum vulgare:  the “joy of the mountains” as it was embraced by the Greeks. This is common oregano—the herb that makes pizza spice blends stand out from basic Italian seasoning blends.

Not everyone uses the same language, though. Some people confuse oregano with marjoram (Origanum majorana), which is another species within the Origanum genus. Marjoram has a gentler flavor than oregano: it’s slightly sweeter and makes a great addition to sausage blends. In addition, marjoram is less hardy than oregano. It’s more often grown as an annual, whereas oregano is a happy perennial in zones 4-8.

Living in zone 4, with winters that just seem to be getting colder and colder, I bring a couple of my oregano plants indoors before frost, just in case. In contrast, I cover a few remaining outdoor plants with straw to protect them. They do come back each spring, but often need some pruning before the hotter weather sets in.

Oregano is primarily propagated by cuttings. When pruning an adult oregano plant, trim two or three healthy stalks with just a few leaves. Dip the end of the cutting into water, then into just a tiny bit of rooting hormone. Then place the stalks into jars or pots of potting mix and firm the soil around them.

The cuttings should be spaced so their leaves don’t touch each other. Place these little pots on a warm, sunny window sill, and make sure they only get partial sunlight, not full, until they root. You should keep the soil moist and check your cutting regularly to make sure that none of them are decomposing.

After a few weeks of tender, loving care, check them for rooting. Just tug gently on the cutting to test for resistance. A cutting that’s starting to root will resist a gentle tug, whereas non-rooted cuttings will just slip free. At this point, you can transplant any rooted oregano plants into larger pots of their own.

Oregano thrives in semi-shady locations where it won’t scorch in the hot sunlight. Like most woody herbs, it likes light, friable soil, without too much water. If your garden is getting too much rain, try moving your oregano plant inside for a while, or cover it to give the soil around the herb time to dry out.

These plants rarely need any added nutrients. They’re tough, mountainside plants that are used to stony, poor soil. If your oregano plant is looking a little peaked, however, it’s ok to feed it. Try working a light layer of well-composted manure into the top layer of soil around it.

Keep in mind that overfed oregano, or oregano grown in rich soil, will actually have less flavor than herbs grown in lean, sandy soil. As a result, it’s best to avoid fertilizing this tough little plant.

Oregano rarely has trouble with pests or diseases, but it isn’t entirely immune to attack. These plants will sometimes be affected by aphids. If you find these nasty little bugs on your oregano plant, spray it down with a heavy jet of water to drive the aphids away. In bad cases, if the plant is especially infested, spray the plant with insecticidal soap.

Stressed oregano plants are susceptible to spider mite attacks as well. These mites can be treated with insecticidal soap, but it’s best to avoid the stress in the first place. Don’t allow your oregano plant to dry out in very hot weather or scorch in hot sunlight.

In addition, this herb is sometimes affected by mint rust. If you have mint plants growing nearby, try to keep a buffer-plant like chamomile between the mint and the oregano.

Just snip off oregano as needed! You can harvest more to dry or freeze before cold weather comes as well. Oregano has the best flavor before flowering, but you can use its leaves all year long. I like to keep a couple of plants indoors to use through the winter.

Having regular access to fresh oregano is fantastic, but this herb dries easily too. You can freeze it easily as well, especially in olive oil cubes.

But there are other ways of using your harvested herbs!

Uses for Your Oregano Plant

Oregano leaves contain high levels of vitamins A and K. In fact, oregano is considered to be one of the most powerful healing herbs around! It has startlingly effective antiseptic, antibacterial, and antiviral properties.

One of the best ways to concentrate all that healing goodness is by making an oregano oil infusion. Use this infused oil either topically or internally to fight infection and build immunity.

Add the oregano leaves to a jar and then pour the oil over them. You may want to stir them a few times to encourage the oil to coat all the leaves.

Now, set a pan of water to boil on the stove. When the water is boiling, turn off the heat and let it stand. Place the lidded jar of oil and oregano into the hot water. Make sure the water can’t overflow into your jars of oil. I like to keep the lids on loosely during this part of the process to allow air to escape.

Leave the jars in the hot water (remember to keep the stove off at this point!) for about 5 minutes. The heat will warm the oil and encourages the oregano to release its essential oils.

After that, tighten the lids and move the jars to a sunny windowsill, and let them sit there for 1-2 weeks. It’s a good idea to shake up the mixture every couple days as they’re steeping.

After two weeks, strain out the oregano leaves and store the oil in a cool, dark place.

What Can I Do with It?

Oregano oil is incredibly powerful. Use it on warts, athlete’s foot, and infections, and rub it on your chest to break up congestive respiratory illnesses and open up airways. Oregano is a great lung boosting herb that’s been used for centuries to fight inflammations caused by allergies, asthma, bronchitis, and whooping cough.

This oil is also a healing aid against eczema, psoriasis, and rosacea, and you can also apply it to acne, rashes, and other skin ailments. Oregano is an effective antibiotic, even in cases where bacteria are resistant to conventional antibiotics.

Just don’t take or apply oregano oil during pregnancy or during the first few years of breastfeeding. Medicinal levels of oregano’s volatile oils—namely thymol and carvacrol—can be dangerous for small children, both in and out of the womb.  While it can be used carefully on young children, avoid giving kids under the age of 5 oregano oil internally.

Whether you’re growing this aromatic herb to flavor meat, spice up your butter, or heal your family, it’s an absolute joy to grow. Hardy, vibrant, and deeply scented oregano is easy to grow in almost any environment.

Now that you know how to keep your oregano plants thriving, you can ditch the grocery store spice aisle and enjoy the fuller flavor of this homegrown herb. Enjoy!