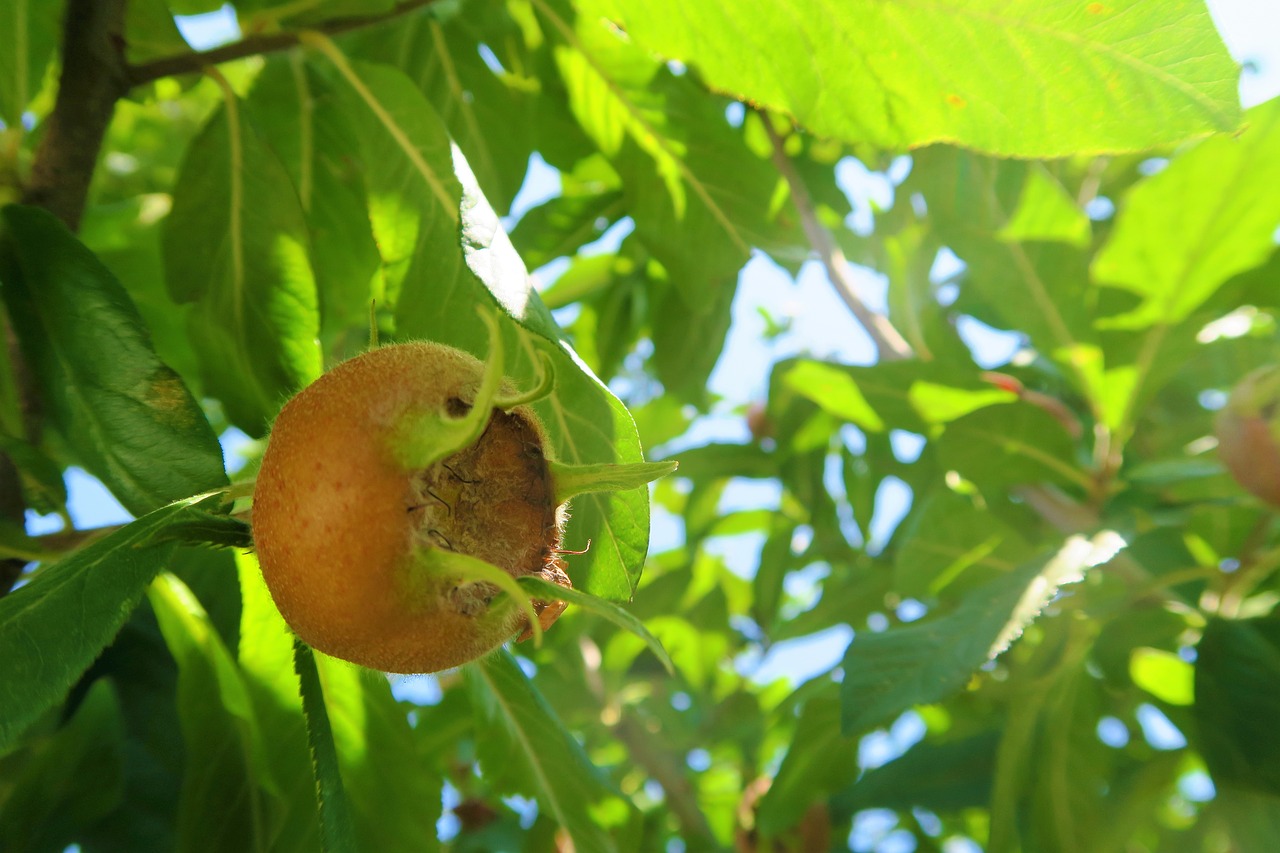 Have you ever heard of a medlar before? If you haven’t, you’re not alone. Although this fruit grows throughout Europe, it has fallen out of popularity in recent years. Now that people are developing greater interest in heirloom fruits and vegetables, interest in it is growing again. Read on to learn more about it, and how to grow your own.

What is a Medlar?

The medlar (Mespilus germanica)  is a large shrub or tree that produces fruits in the late fall and early winter. It’s a member of the rose family, which makes sense because the fruits are reminiscent of large rose hips. The fruit is said to taste like apple butter, with hints of cinnamon, and vanilla.

Sounds scrumptious, doesn’t it? To me, it would be like the perfect accompaniment to the pumpkin spice rage. So why have most people never heard of it? Well, there’s the fact that most people think it has to rot before it can be eaten through a process called “bletting”.

This much-maligned fruit seems kind of romantic to me, despite what has been said about it. It’s an ancient fruit and requires care for its full potential to be known. To me, it feels like an important lesson in this age of industrial food where you can enjoy any fruit you like by going to the supermarket. With a medlar, you have to be patient and care for the fruit before you can enjoy it.

All ingredients have their stories to tell, and this one is ready to be brought back to the orchard and onto your table. The final product can be scooped up and eaten straight up or made into jams and pastes. I say, what’s not to love? In Sardinia, where I live, medlar trees grow wild in huge numbers. I’m looking forward to trying this enigmatic fruit this year.

Bletting is somewhat similar to a persimmon’s ripening process. This is another fruit that’s generally acidic, but edible and delicious once allowed to soften. In the case of medlar fruit, the skin actually becomes brown and wrinkled, much like a ripe passionfruit will look when it’s ready. The inner flesh also turns brown and soft, which leads many people to believe that the fruit is “rotten”. This is a common misnomer.

Most likely due to the bletting process, medlar has fallen out of fashion. We’re not used to this kind of ripening, and many are intimidated by it, believing they have to eat something rotten. But our foremothers and fathers had no problem with this delicious fruit. Despite the way it has been portrayed, medlar seems to be making a bit of a comeback.

Medlars have quite a long history, having been cultivated for over 3,000 years. The tree is native to Iran, southwest Asia and southeastern Europe, all along the Black Sea coasts from Bulgaria to Turkey. It was brought to England by the Romans, and can still be found in many English gardens. It was an important fruit during the medieval era.

Great writers such as Shakespeare and Chaucer used medlars to convey the loss of womanly virtue. In The Honest Whore, Thomas Dekker wrote: “Women are like medlars, no sooner ripe but rotten”. Medlar fruits were also used as an analogy to old age, or a rotten personality.

Also, because of their shape, they have been known historically as the “open-arse” fruit. That pun was often used in bawdy Elizabethan and Jacobean era plays.

There are several common medlar varieties you can grow. Royal and Nottingham are the two most widely available types, and are smaller than Dutch or Russian. Royal is said to have the best flavor, while Nottingham—the most compact variety—has gained the Royal Horticultural Society’s Award of Garden Merit.

There are several other trees or shrubs that are known as medlars, even though they’re not in the same family.
African medlar (Vangueria infausta) is part of the Rubiacea family. Its fruits have a pleasant apple-like flavor and can be eaten raw, sans the bletting process.

Japanese medlar is really a loquat tree. Like standard medlars, it’s part of the Rosaceae family, and its fruits are sometimes known as Japanese or Chinese plums. In Italy, they’re called nespole.

Crataegus azarolus is known as Mediterranean, Neapolitan, or even Welsh medlar. They’re a type of hawthorn that bears nice plump fruits, which resemble medlars.

North American or Stern’s medlar is Mespilus canescens and was discovered in 1990. This is an endangered species with only 25 known plants in the wild. It is believed to be a hybrid between M. germanica and one or two native North American Crataegus species.

Red medlar (Lycium spp.) is in fact the goji or wolfberry. Lycium has been known to European herbalists since ancient times, and was traded from the Far East to Europe by the Romans.

The Spanish medlar (Mimusops elengi) is also known as the Spanish cherry. Its edible fruits are oval shaped, and bright orange. This is an astringent plant, like the medlar, and has therefore been used traditionally as a mouthwash in folk medicine.

How to Grow Medlar

Medlars are usually sold grafted onto dwarf quince or hawthorn rootstocks, but sometimes pear will be used as well. They require warm summers and mild-but-frosty winters. These trees prefer a sunny location with well-drained soil. Young trees should be watered during dry spells for the first three or four years.

The best time to plant trees is between November and March. If you plant more than one (no need to, as they don’t require cross-pollination), allow 4.5m (15ft) between each tree. Prepare a large hole by breaking up the soil, then augment with compost or well-rotted organic matter. Plant a stake with the young trees, and then mulch with compost in spring.

This deciduous plant can grow up to 8 meters (26 feet) tall, but in some places, it’s shorter and more resembles a large shrub. Medlars do not require pruning, but if you want to keep their shape, prune them in mid-winter when they’re dormant. Most medlars live for 30–50 years.

The flowers are plentiful and white, much like apple blossom, but larger. Leaves turn a gorgeous rust color in autumn, and the fruits turn a golden yellow. The branches are twisted and have highly textured bark, so they’re beautiful trees in their own right.

Medlars are true autumn and winter fruits because they ripen in late autumn, and need some time to “blet”. This can either be naturally, on the tree via frost, or through storage.  Patience is required before they can be consumed. This makes medlar a great fruit tree to consider for gardeners who want year-round access to fresh fruit.

It’s also a tree to consider if you want something unique to sell at the farmer’s market, or to local adventurous chefs looking for ingredients to inspire new seasonal dishes. Each fruit is small, ranging from about 1 to 2 inches in diameter, and can vary in hue from rosy rust to dusty brown.

Pick them in mid November and then store in a cool area for 3-4 weeks. However, the colder they are in storage, the quicker they’ll soften. You can also pop them in the freezer to try and mimic bletting by frost.

Once softening begins, the skin rapidly takes on a wrinkled texture and turns dark brown. The inside reduces to a consistency and flavor reminiscent of applesauce or apple butter. You’ll know they are ready to eat when they smell like apples.

Using Medlar in the Kitchen

Once bletted, eat the fruit raw and enjoy it as is for dessert, or a sweet snack. It’s traditionally used to make jelly, or to produce “medlar cheese”. This is made by making a sliceable fruit paste, and then forming the “cheese” with molds. Membrillo is a Spanish fruit paste made with quince and usually eaten with a sheep cheese, which is probably a great way to eat medlar cheese as well.

If you don’t want to place the medlar cheese in molds, spread on toast, or use it as a stuffing for baked apples. I imagine it would also make an amazing addition to  pumpkin bread that’s chock full of cinnamon, cardamom, and cloves. The jelly is also used in savory applications, as a condiment for game, roast meats, pates, cold or cured meats, and terrines as well as soft cheeses.

Medlar jelly is a beautiful amber rose color and can make a wonderful holiday gift.

Make sure the medlars are well bletted. Cut each fruit in half and drop into a heavy-based saucepan. Pour over the water. Cut the lemons into six pieces and add to the fruit. Bring to a boil then turn the temperature down so the liquid simmers gently. Partially cover with a lid and leave to cook for an hour, taking care that the liquid doesn’t evaporate. Give the fruit an occasional squash with a wooden spoon. Avoid the temptation to stir or mash the fruit, which will turn the finished jelly cloudy.

Pour the fruit and its liquid into a jelly bag suspended over a large jug or bowl. (I hang mine from the taps over the sink.) Let the juice drip into the jug, giving it an occasional squeeze ’til all the juice has dribbled through.

Put the juice back into a clean saucepan and boil for four minutes, and then add an equal amount of sugar (likely to be about 500g or 2 cups). When the sugar has dissolved, pour into clean, warm jars and seal. Leave to cool.