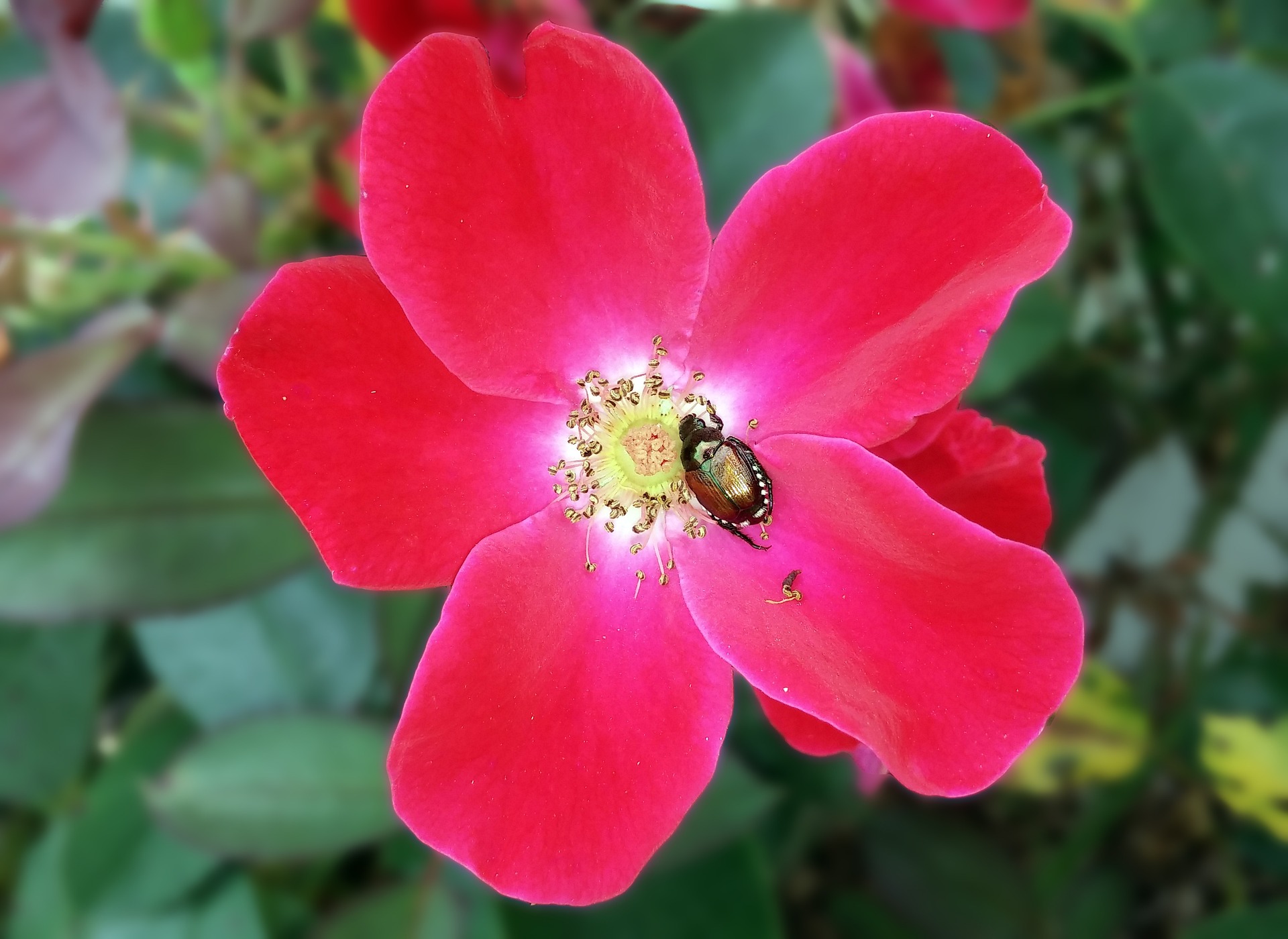 Knockout roses are some of the most eye-catching flowers available, and a stunning addition to any garden. You’ll find yourself falling in love with these colorful flowers, which are easy to care for, and hardy enough to grow in most climates.

With its own distinct fragrance, the abundant flowering habit of the knockout rose is credited by many as reviving the popularity of the species. It also makes them a great addition to a flower garden. If you’ve never grown a knockout rose, or just want to learn more about them, read on for our complete guide.

What are Knockout Roses?

Relative newcomers to the gardening world, knockout roses were created by Will Radler, a Milwaukee rose enthusiast, in 1989. Prized for their colorful blooms, knockout roses happily grow in difficult conditions. They’re also easy to care for and relatively hardy.

There are a few downsides to this species, however. First and foremost, knockout roses aren’t the greatest for cut floral displays. Their thin stems mean that they don’t last for very long when placed in water. In addition, unlike other roses, knockouts don’t have that classic rose scent. Instead, the flowers produce a light, sweet scent.

Largely because of their frequent and abundant blooming habit, knockout roses are continuing to grow in popularity throughout America.

How the Knockout Rose was Created

Will Radler had been an rose enthusiast since he was a young child. He was therefore well aware that roses can be difficult flowers to cultivate successfully. One of Radlers earliest horticultural goals was to create an easy-to-care-for rose cultivar.

In 1974 Radler began to select and propagate roses specifically for hardiness and disease resistance. The quality of the flower was, at this stage, a secondary priority.

Progress was slow, but by the late 1980s Radler had developed a breakthrough strain, labeled 89- 20.1. Despite its unattractive title, this rose was not only easy to grow, but it was also disease resistant. Best of all, it was able to produce copious amounts of pink-red roses throughout the summer.

Within a few years, Radler’s new strain—now named Knockout—was gaining attention. In 1992, the Star Roses and Plants company from Philadelphia entered into an agreement with Radler to begin testing his new rose. After 8 years of testing, the company was ready to file for a patent and officially named the rose Knockout.

Knockout roses were launched in the year 2000 and quickly became popular. So much so that it was named that years All American Rose Selections winner.

Today knockout roses are one of the most popular plants in America. With several different varieties commercially available they are a common sight in gardens across the nation.

Compared to other species there are, currently, not as many varieties for you to choose from. While you aren’t going to be overwhelmed by choice, there are still a number of varieties available. This means that you’ll be able to find the perfect flower to complement your garden.

Amongst the most popular varieties of knockout rose are:

Producing cherry red double flowers, this variety is also known as Double Knockout. Most notably, it tolerates cold better than other varieties.

The Pink Double Knockout is another double flower variety. As the name suggests, it produces bright pink flowers.

A light pink variety. Also known as Pink Knockout, this is a single blossoming flower.

This one produces abundant, fragrant yellow flowers, and is also known as Sunny Knockout.

A climbing variety, reaching up to 12ft in full sun. In the autumn the foliage of this variety turns a shade of deep burgundy, complementing its red flowers.

As mentioned earlier, knockout roses are easier to care for, and far hardier than other roses. When provided with the right care and attention, they will absolutely thrive, producing scores of colorful flowers throughout the summer months. This makes it a great addition to flower gardens and, in particular, pollinator gardens.

Knockout roses thrive in sunny locations, ideally receiving 6-8 hours of sunlight a day. The best location will provide the roses with sunlight in the morning and a bit of shade in the afternoon, when the sun is at its hottest.

Knockout roses do best in USDA zones 7-11. You can grow the plants in areas outside this, but they’ll need a little extra care, and may not be as abundant.

Soil should also be fairly well draining. Overly sandy soils, or soils heavy with clay, can negatively affect drainage. In the worst case scenarios it can lead to the rotting of the plants roots.

Plant your roses when they’re dormant, either in the spring or fall. This will allow the plant time to become established before flowering in the summer.

Although they aren’t a particularly thirsty species, you will need to water your roses regularly. Try to keep the soil around the plant constantly moist. Don’t over water the plants, this can lead to disease and rotting. Generally, watering roses once a week will be enough.

You’ll need to water more frequently during hot or dry spells. It ‘s a good idea to check the soil every day to make sure that it hasn’t dried out. Additionally, mulching around the plant will help to conserve moisture and keep the soil cool.

Roses growing in containers will need to be watered more frequently than those growing in the ground. There should also be drainage holes in the bottom of the pot to prevent the soil from becoming waterlogged.

When you do water your roses, try to keep the leaves dry. Damp leaves can develop disease, while water drying on petals can wash out color from the petals. Instead, water the base of the plant. This allows the plant to absorb as much of the moisture as possible.

It isn’t strictly necessary to feed knockout roses, especially if they are planted in rich soil. However giving the plants a dose of high quality rose feed in their first spring will help the plant to establish itself and encourage flowering. You can then continue to apply regular foliar feedings. This will encourage the plant to produce lots of healthy flowers. Alternatively just as applying an Epsom salt solution can sweeten tomatoes it will also encourage roses to flower more abundantly.

One of the biggest attractions of knockout roses is that they are disease resistant and self-cleaning. This means that deadheading is not necessary. As new flowers emerge they push the older, spent blooms out of the way.

Generally the plants will maintain their upright, compact shape, even without pruning. However pruning will help to keep the plants neat and more pleasing to look at.

While disease is unlikely should you notice any potential signs, such as black stems, prune them away as quickly as possible. Any withering should also be removed. Swift action will prevent disease from spreading to the rest of the plant.

Keeping the plants clean and tidy will also help to prevent Rose Rosette Disease. Knockout roses are resistant to most diseases and common rose problems, but they seem susceptible to this once rare issue. Rose rosette disease has been able to gain a foothold in knockout roses because of the proliferation of flowers in mass plantings.

As with other varieties of roses you can prune knockout roses back in the fall. This will encourage more vigorous new growth the following spring, and a more abundant floral display.

Knockout roses will happily grow in most climates. In USDA zones 9-11 they are quite hardy. In colder areas, where winters are harsher you may have to take some protective action. Severely low temperatures can damage the plants.

Gardeners in areas that experiences cold winters can protect the plant by covering it with a horticultural fleece or protective covering. Mulching around the base of the plant, or covering with a thick layer of straw, will help to insulate the roots and base of the plant. Protecting them from prolonged cold spells or severe frosts.

If you are unable to cover your roses regularly, clear any snow and ice from the plants. This will prevent the stems from becoming damaged or snapping under the weight of the ice. Roses growing in containers can be taken indoors during the colder months.

If you’re just beginning your journey as a gardener, cultivating knockout roses is a rewarding place to start. In fact, growing these glorious blooms may even inspire you to develop your garden further and create a flower-filled space, such as a colorful Shakespearean flower garden or a useful potager garden.