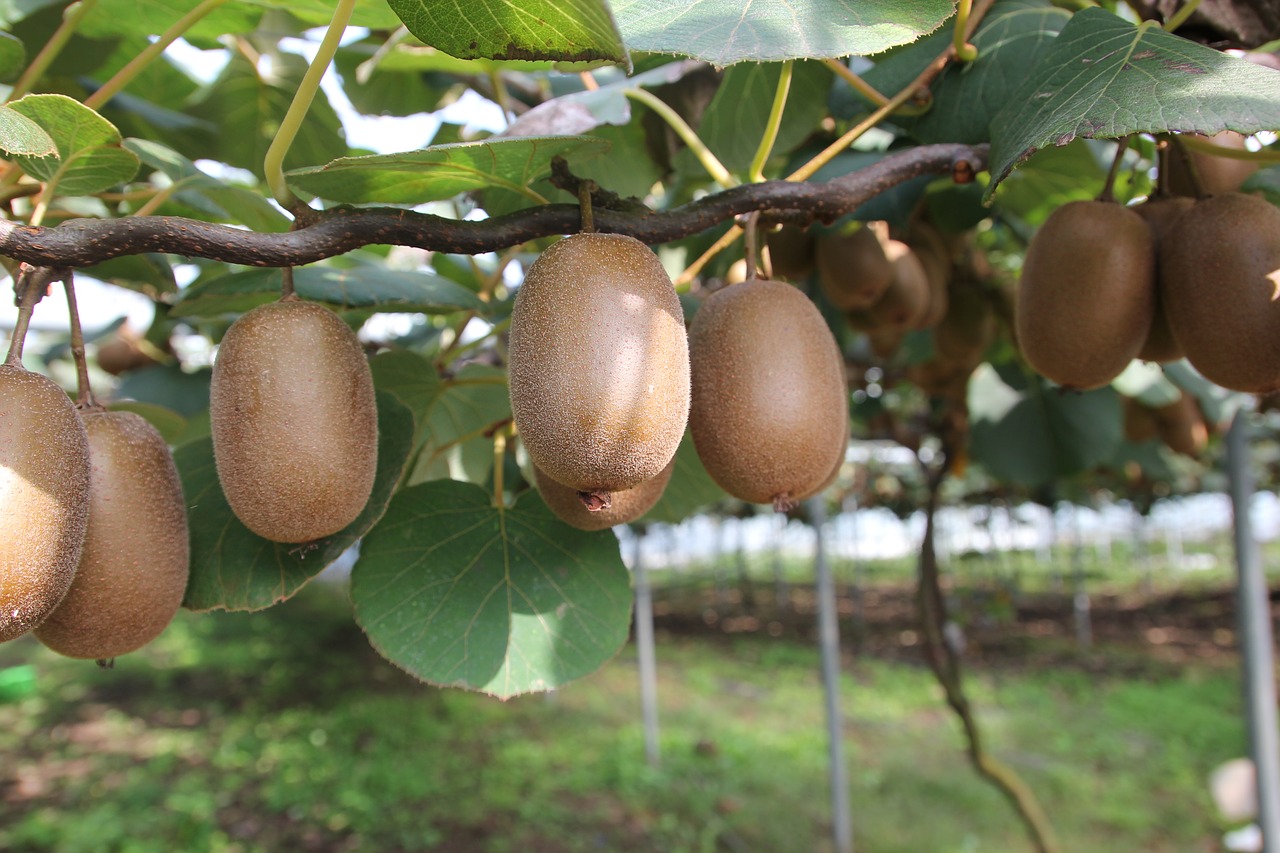 Often seen as the epitome of tropical fruit, the kiwi plant is more versatile than you might think! In fact, any area with mild winters, and a long growing season can easily support this gorgeous fruiting plant. Read on to learn more about this luscious fruit, and how to grow it in your home garden.

Did you know that the kiwi plant has more in common with grape vines than peach trees? Its graceful, spreading vines drape over trellises and walls. Lush, red vines, abundant flowers, and vibrant leaves provide an eye-catching display.

Add delicious, nutrient-dense fruit to the mix and you’ve got an exciting new addition to the garden. But, can you really grow a kiwi in North America? Absolutely!

There are two varieties of kiwi plant. The fuzzy, comparatively large kiwis we’re used to seeing in North America; and their smooth-skinned, hardy cousins.

You know the fuzzy, cute kiwis at your local grocery store? The ones that fill up the corners of fruit baskets? Those popular little fruits are only suitable for growing in especially warm climates. They’re especially popular in southern Californian gardens or in sunny New Zealand.

Fuzzy kiwis (Actinidia chinensis) can’t tolerate temperatures below 10 degrees F, and thrive in long, hot  summers in zones 7–9. They’re native to southern Asia, and in the right climate they’re vigorous, fast-growing, vine plants that can reach up to twenty feet. Much like hops, kiwis need a strong, tall trellis to grow on.

Unlike a grocery store kiwi, the hardy variety is a small, smooth fruit. Intensely flavored and addictively sweet, hardy kiwis don’t need to be peeled. You can pop them into your mouth whole, right off the plant.

Hardy kiwis (Actinidia kolomikta) are native to northern China and can survive winter temperatures down to -25 degrees F. Some Russian varieties can even thrive in winters that reach -35 degrees. If you’re interested in trying Kiwis in the Northeast or Midwest, check out varieties like “Natasha” and “Tatyana”.

In this article, I’ll be focusing specifically on hardy kiwis, though most of the advice is adaptable to tropical kiwis. Hardy Kiwis are ideal in zones 5-9, but some varieties are adapted to colder climates as well.

Make sure you have plenty of room, as kiwis need a lot of space. The kiwi plant is a dramatic, draping vine that spreads quite a bit as it grows.

Plant your kiwi along a fence or arbor to give it some structured climbing space. Training your kiwi to climb will also preserve much of the fruit from rot and ground pests.

Starting kiwi is easiest with a rooted cutting or a young plant. You can start hardy kiwi from seeds, but the process of obtaining and cleaning seeds is often daunting. Many seed catalogues sell rooted plants and young potted kiwi vines that can be easily transplanted.

You will need both a male and female kiwi plant. Hardy kiwis aren’t able to self-pollinate, so plant a male kiwi to make sure your female kiwi plants bear fruit. You’ll only need one male for every 8 female kiwi plants. Keeping to the 1:8 balance allows you to get maximum fruit every season, without them taking over your garden entirely.

It’s important to get a male and female of the same variety. This is because plants need to flower at the same time in order to pollinate. Different kiwi varieties flower at slightly different times. This could be tragic if the male blooms too early or late to pollinate his female vines.

Kiwis need at least 10-18 feet between them to thrive. Remember, these are spreading vines—they need their space.

They also need well-drained soil and consistent, full sun in order to fruit properly. Kiwis love sunlight. They bask in it! Hardy kiwis especially seem to soak up sunlight while they have it, in order to survive the cold winters.

If you live in a desert climate, however, give your kiwis a bit of a sun break. In very hot climates, your kiwis will appreciate some light shade or dappled sunlight in the hottest part of the day.

Your newly transplanted kiwi vine should be watered often. Check young plants daily and water if the soil isn’t obviously moist. After the plant has transitioned, you can water more carelessly. Give mature plants a good soaking and then let them dry out for a few days.

A bit of mulch or some light manure is great for keeping hardy kiwis happy. Avoid fertilizers though, as the plant is easily overwhelmed buy rich soil.

Most kiwis won’t produce fruit their first season. By the second season, however, you should start seeing some delicious morsels. With careful pruning, each year will yield a more abundant harvest than before.

Pruning the long, gangly kiwi plant may seem intimidating, but kiwis are very forgiving. Late fall and early winter are ideal times for doing so. After the growing season, cut your plant back to a place where the stem is about 1/4 inch in diameter. If your vine didn’t produce enough well-sized branches, just cut it back by about 2 feet and hope for better growth next year.

First-year pruning focuses on building a strong foundation. You want to encourage straight growth and a good, basic framework. Concentrate on training the stem to grow straight along its trellis.

In later years, work on building strong side growth off of your main stem. Cut away branches that are twisting around other branches, they’ll end up choking part of your kiwi plant.

If you’re trellising your kiwi (and you really should be), encourage the plant to grow with its trellis. Keep it from wrapping around it and overwhelming its support structure. “On, not in” is a great motto while pruning. Your kiwi is growing on a trellis, not in one. Keep it following the right course.

Hardy kiwi fruit don’t ripen all at once. Like tomatoes, they ripen gradually. You’ll know the fruit is ripe when they feel soft to the touch and are just noticeably fragrant. These kiwis can be harvested when ripe, or they can be harvested while still firm and allowed to ripen on the counter.

Depending on when the growing season begins in the spring, your hardy kiwis could ripen anywhere from July to November. They absolutely must be harvested before the first frost arrives. It’s essential to keep an eye on the fruit and the weather.

Kiwi fruit harvested before ripening last longer and taste just as sweet. Just make sure that you don’t harvest too soon. There’s a wide window of opportunity in kiwi harvesting, but if kiwi is harvested too early, it’ll have to ripen indoors. This will result in a dull flavor and a less juicy interior.

The best way to avoid this is to allow your kiwis to ripen on the vine as long as possible. Then, check a fruit or two before picking.

If you do want to harvest early, pick one kiwi and cut it open. Look at the seeds. If the seeds are black, the fruits can be picked, even if the fruit itself is still very hard. Black seeds indicate that the fruit is mature enough to finish ripening indoors.

Remember that fruit harvested when ripe won’t last long on the counter. You’ll have to eat it quickly!

Surprisingly carefree in the winter, hardy kiwis can get by with minimal preparation.

After harvesting all the fruit you can find before frost, let your kiwi plant rest for a month before pruning. Prune back before the coldest winter weather hits. Up here, that would be late November or early December.

Prune gently, then mulch your kiwi plant with straw and manure. Just straw is fine too, but avoid heavy fertilizers as kiwis are sensitive to over-feeding. They do need a thick layer of mulch around the root base to winter well, so pile on the layers.

Try to spread the mulch as well, to keep the surrounding ground warm and mulch up the base of the plant.

In snowy climates, piling snow over the mulch layer actually adds additional insulation for the roots. Therefore, shovel some snow on top of your kiwis in the winter to keep the root base safe from that bitter winter air.

Not So Tropical After All

Bring a touch of the tropics to your garden, without all the hassle of building a greenhouse or moving to Hawaii.

Hardy kiwi plants are beautiful, graceful, and delicious plants that can make you feel as though you live in the tropics. With their delicate flowers and abundant fruits, they’ll transform your garden into a magical retreat. Plant them alongside hardy hibiscus plants and Chicago fig trees for a decadent escape from conventional cold-climate gardening.