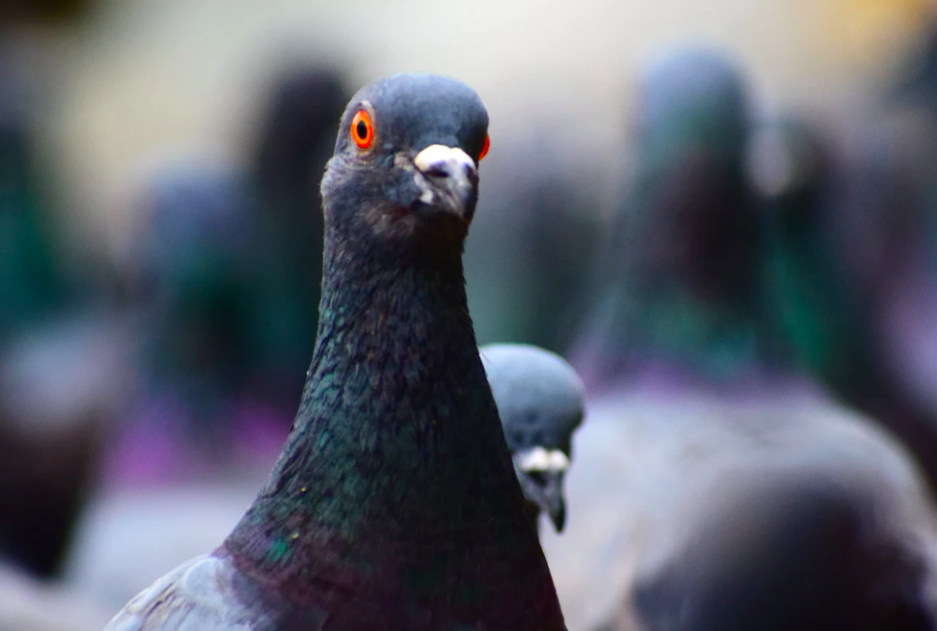 If you live in an urban setting, you’ll likely have to contend with pigeons invading your garden space. These downtown denizens just love to visit balcony and patio gardens. Sadly, as pretty as they are, they can wreak havoc on tender plants. Read on to learn how to get rid of pigeons without hurting them (or your plants) in the process.

Did you know that the pigeons that we see in cities today were originally domestic pigeons? They’ve just returned to the wild and are considered feral, and in most cases a real pest. They originated from rock doves who made their homes on sea cliffs and mountains.

City balconies and rooftops make perfect substitutes for the modern day pigeon, and of course the easy access to food doesn’t hurt either. Although not completely domesticated, they were bred for use by humans. As a result, the sheer number of humans they come into contact with on a daily basis means that they have no fear of us. This is particularly true when an active nest is present.

How to Get Rid of Pigeons (and Save Your Balcony Garden)

Urban gardening is on the rise in most cities, which means people are using their balconies and outdoor spaces more than ever before.  It also means that a battle royale between those gardeners and the local pigeon population is being waged on a daily basis.

Pigeon populations can range from tens of thousands in smaller urban settings to millions in larger cities. And all those birds are constantly looking for somewhere to call home. What’s the big deal, you ask? Well, those birds produce quite a lot of droppings that can cause a lot of damage in a very short period of time.

My current balcony is painted concrete. A pigeon pooped in several places out there, and within the week the paint began to peel and chip. The reason for this is that pigeon excrement is highly acidic. As a result, it does a lot of damage to both building structures and foliage.

Many people are looking for humane ways to deal with this problem. If you’re one of them, please read on for a list of seven humane and natural methods on how to get rid of pigeons. I’ll also be discussing how to safely remove debris left behind after the pigeons are gone.

Except for a mystery hole that was chewed in it, my balcony has netting to prevent unwanted visitors. Although somebody (squirrel?) chewed their way in not long after I moved in. I had to fix that hole pretty quickly, because a nesting pair of pigeons tried to take up residence out there.

So, while it may not be completely foolproof, it has done really well at keeping my balcony clear of pigeon-related debris. It’s not the cheapest option for those who need to put the netting up themselves, but I feel like cost is worth it over time.

If you’re looking for a less expensive option or would prefer not to put up netting, try a fake predator. In fact, placing a fake owl, hawk, or snakes where they are easily visible to the pigeons may deter them from setting up camp on your property.

There are a couple of things you need to keep in mind when employing this method. Firstly, you must find an owl or hawk species that would be seen in the city. These usually include smaller species such as the barred owl and the red-tailed hawk.

You also need to make sure that you move the decoy around. If the “bird” is never seen moving, the pigeons will realize that it’s fake. As a result, they won’t be scared by its presence. Snakes are a little easier in regards to species recognition since their shape and shiny scales should be enough to deter visitors.

Most garden centers will carry decoys, or you can try visiting a hunting goods store.

Of course, there’s no competition when it comes to the real deal. When I was visited by a nesting pair of pigeons, I thought for sure I’d been beat. I just don’t have the heart to destroy a nest.

Luckily, my cat Gregor likes to spend copious amounts of time lounging in the window. He also loves supervised time out on the balcony. Either seeing him in the window, or catching his scent on the balcony saw off that pair quite quickly. Thankfully, none have been back since, so they must have spread the word.

If your pets aren’t allowed outside, try rubbing some of their hair along favourite roosting spots. Alternatively, try placing wads of fure around to introduce their scent to the space. For those who don’t have pets, but know someone who does, it might be worth the awkwardness to ask them for some spare brushings. I doubt very much they’ll miss them!

Wind chimes might not be the most popular with the neighbours, but try this option anyway. If it works, they may come on board and join you. The noise is sporadic enough to be startling to the pigeons, but hopefully enjoyable for you.

Since you can’t always count on a breezy day, you can also hang aluminum pie plates from the railing, or somewhere  they’ll catch the sun. The flashing light reflected off the plates is startling and disorienting to pigeons.

Although it’s not quite the same situation, my grandfather used to hang aluminum pie plates out in the fields to protect his vegetable gardens from the deer. It actually worked quite well, so if you’re learning how to get rid of pigeons, it’s worth a try!

5. Spikes and other Landing Deterrents

You may have seen strips of spikes on commercial buildings around various cities. Whether you want to use this method will depend on whether you’re able to install such a permanent solution. If you have a railing rather than a flat ledge, consider stretching a child’s slinky around the railing. It’ll be much cheaper and still cause the pigeons problems when they try to land.

Some garden centers and hardware stores sell gels that can be applied to surfaces to make them sticky and or slippery. Just make sure to check the ingredients. You probably don’t want anything that might contain dangerous chemicals. We’re aiming to deter birds, not harm or kill them.

6. How to Get Rid of Pigeons with Spices

Similar to other animals, pigeons dislike strong spices. These include chili powder, cinnamon, cayenne pepper and black pepper. Liberally sprinkling these spices on popular perching spots around your home can help to deter these visitors.

Due to wind and rain, you’ll need to replenish frequently, but this tactic in particular is very successful. If you get a lot of wind on your balcony or property, you can wrap the spices in cheesecloth to prevent them from blowing away.

Ultrasonic devices emit a high-pitched sound that confuses birds and drives them away. These devices are available at many garden centers and hardware stores. If you aren’t able to find a device locally, there are many available for purchase online. Check out eviews to help you find the right device for your needs.

While this method is highly effective, it may not be the right method for pet owners. The device won’t discriminate between your pet bird and the pigeons outside. Some devices also advertise the ability to deter small animals. It would be worth the research to make sure your small dog, cat, or rabbit doesn’t fall into this category.

How to Remove Pigeon-Related Debris Safely

An important step in making your outdoor space usable after managing to clear the pigeons is cleaning up after them. It’s important to remember that their excrement is toxic and is known carry diseases. Wear a mask and gloves when cleaning. Additionally, individuals with compromised immune systems shouldn’t deal with pigeon droppings.

To properly remove the droppings, use a plastic or metal scraper to detach the stuck-on feces. Sweep up this and any surrounding debris and immediately dispose of it. Then use a scrub brush and a grease-fighting agent like dish soap to scour the area.

To remove any stains that may be left, sprinkle an ample amount of baking soda onto the stain, leave for about half an hour and then scrub clean. Make sure to rinse well with water after.

Depending on the surface where the droppings are located, you may want to consider slightly different methods and cleaners. Club soda and vinegar work well on wood surfaces, and laundry detergent works well on metal.

Another thing to keep in mind is that a pigeon’s nest isn’t something that your child should touch, nor take to school to show others. Pigeon droppings are actually what holds their nest together, so those nests need to be disposed of with the same amount of care as their droppings. Your kids can teach their peers how to get rid of pigeons without sharing germs around, right?

I’ve been pretty lucky so far, but I’ve seen the damage that pigeons can do to city gardens. Probably the most frustrating thing is that they aren’t even eating the produce. They just poke and tramp around just enough to damage the plants, and of course poop all over them.

I sincerely hope that if you’re experiencing this problem firsthand, this article can help you to get some relief. Pigeons are persistent, but so are us gardeners.

Ashley first studied as a Silversmith and enjoys many creative pursuits, including of course, the written word. She is an avid urban gardener, as well as a budding aerialist. She holds a certificate in business communications and has past experience in the fields of HR and Event Planning.