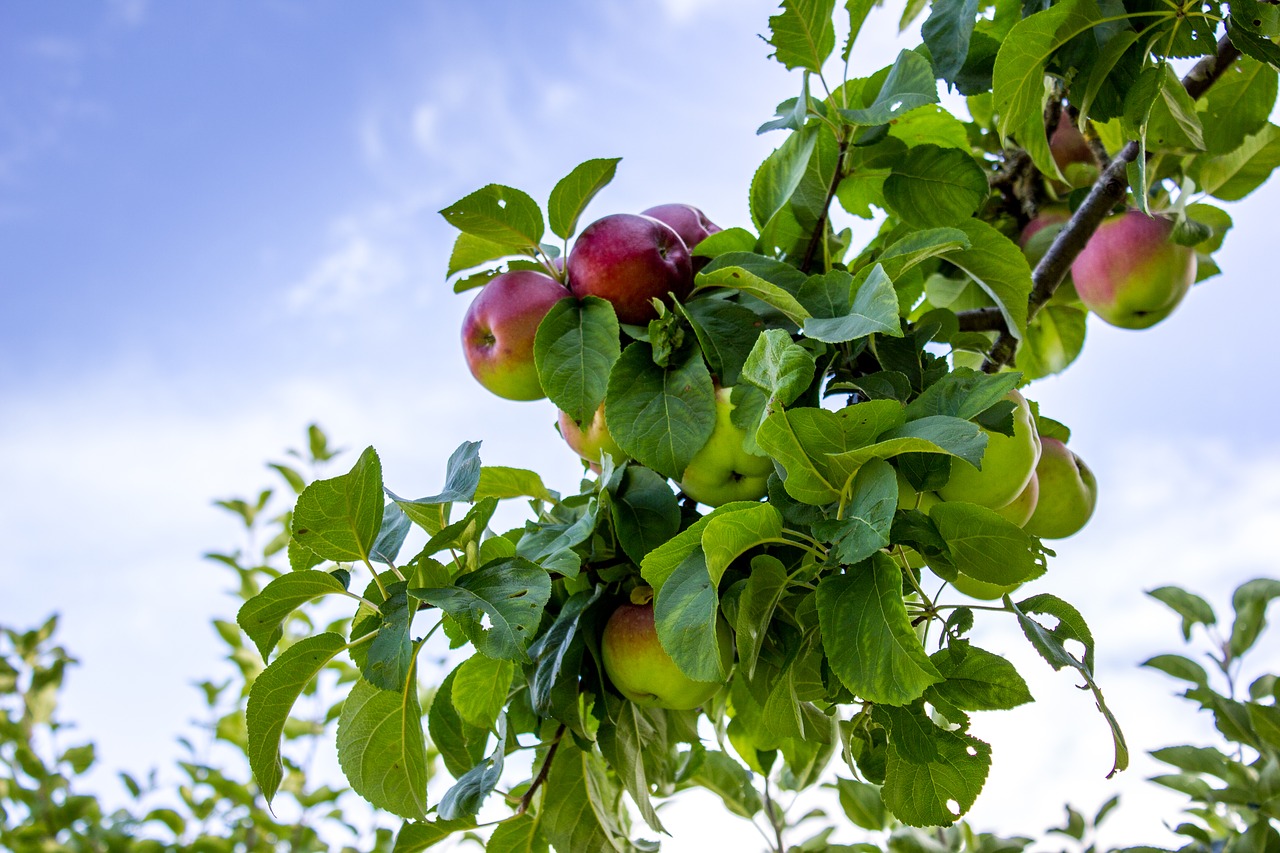 Fruit trees are often seen as a luxury for those with large yards, though this isn’t necessarily the case. Many fruit trees—especially dwarf varieties— grow perfectly well both in pots and smaller gardens. You just need to choose the right type of tree for your growing site. If you’ve ever thought about growing heirloom apples, read on to learn how!

Apple trees have always been highly popular for home growing. In fact, recent years have seen a huge rise in the amount of cultivars available. Some of these are purely for culinary uses, others are for eating fresh from the tree.

This got me interested in the old-fashioned apple cultivars, particular the heritage and heirloom fruits that time almost forgot. These vintage cultivars provide a rich, diverse habitat for a whole host of wildlife. Furthermore, they fill your garden with blossoms throughout the bright spring and summer days.

It’s relatively difficult to find some of the oldest and most accomplished heirloom apple varieties. That said, after much research and days of pleasant meandering around Victorian English Gardens, I have compiled a list of some of the best.

Below is a comprehensive list of the best vintage cooking, eating, and cider-making apple varieties. In my opinion, these special heirloom apples bring a touch of nostalgia to the modern garden.

This 17th Century russet-skinned apple has a distinctive pear-like flavour, and is perfect for eating fresh, juicing, and cider making. It’s a green and red, English, late-fruiting variety that’s suitable for zones 5 and 6.

A popular English eating variety from the Victorian era, with smooth red and green skin and a distinctive “pearmain” shape. Late Season Fruiter, suitable for growing in zones 4–8.

This classic English variety from 1740’s Oxfordshire was first locally known as “Dempster’s Pippin”. It has smooth, green-yellow and orange skin, and the flesh has a distinctive nutty flavour. This cultivar has a vigorous habit and heavy fruit production, and excellent for both cooking and eating fresh. Because of its hardiness, it’s suitable for growing in zones 4–8.

Originally from Italy, but grown in America from the late 1700’s. Gravenstein is a smooth yellowish green-skinned variety with a mid pink blush. A good multi-purpose apple, perfect for cooking, cider making and eating fresh with a wonderful combination of tart and sweet flavours. Suitable for growing in zones 5–6.

Believed to have originally come from the village of Rambure, and was first recorded by a French botanist in 1535. Rambour is the name given to large, ribbed, flat-sided apples in France. In fact, ”Franc Rambour” is one of the oldest and best-known varieties, still found in French gardens today.

This tree’s green-red fruits are large, juicy and aromatic, and are as perfect for eating fresh as they are for making apple sauce. Suitable for growing in zones 4–8.

A Netherland favourite and superb cooking variety. This late-fruiting apple tree has the best and sweetest flavour for fruits fresh from the tree. Its very large apples have lightly russet skin and make a mean apple strudel! Suitable for growing in zones 4–8.

This French specimen dates back to 1598, and has a fantastic champagne-like flavour and great texture for cooking. It’s commonly used in the classic French patisserie “Tart Tatin”. Fruits have a deeply lobed, crown-like shape and red-blushed, yellow skins. This cultivar is well-known and sought after throughout the U.S. and Europe, and is suitable for growing in zones 4–8.

Originating from Cornwall in the U.K., this attractive, late-season eating apple is best picked fresh from the tree. Fruits are rosy red with lightly russet skin, and an aromatic, perfectly rounded flavour. Suitable for growing in zones 5–9.

Arguably the best-flavoured cooking apple to originate from England. This cultivar’s fruits are recognized by their sharp, intense flavour and large, almost flattened shape. This late-fruiting variety is essential for any country garden, makes a good home-cooked pie, and can also be used for juice and cider making.
Suitable for growing in all zones.

Of all the varieties available, this is still top of the tree when it comes to flavour. These are handsome and widely acknowledged apples, medium in size, with red and yellow skins. A valuable asset and reliable mid-season cropper, suitable for eating fresh, cooking and juicing. Suitable for growing in zones 5–6.

An 18th Century apple of English origin, suitable for both eating fresh and cooking. The fruit has a nice tangy flavour and superb texture for apple sauce. It’s a late-season cropper with perfect red and yellow smooth skins. Suitable for growing in zones 4–8.

Similar to the Bramley listed earlier, the Newton Wonder is another heirloom English apple that gains respect time and again. Fruits have a nice tart flavour and good cooked consistency, and are suitable for zones 4–8.

After all this time, the Egremont Russet is still a superior dessert apple tree and one of the most popular of all English varieties available. The Earl of Egremont cultivated this variety in Sussex, England, in 1872. As a result, it’s a popular choice for Victorian gardens, and a perfect backyard tree with firm, juicy fruits. Suitable to grow in zones 4–8.

A very old variety cultivated by James Grieve in Edinburgh, Scotland, sometime before 1893. New fruits are strong with an acidic flavour, which mellows with maturity. As a result, this apple is a great choice for both cooking, and eating fresh later in the season.

This is an early season cultivar of renowned English origin, developed back in 1874 in Worcester, U.K.. In addition, it’s still one of the most popular early eating apple varieties in England. The rosy red-blushed apples have a smooth, sweet flavor, and the tree itself is very handsome, with medium vigour and pretty blossoms. It’s also a very frost-hardy tree, tolerating temperatures to -30C.

This aromatic, crisp eating apple is originally from Quebec, and was cultivated in the early 1600’s. A decade later, the Fameuse variety was one of the favourite apples of its time, growing extensively throughout Northern New England.

In French, its name means “famous”, which seems quite apt ,considering its dominant popularity. Its green-skinned fruits have a distinctive sweet flavour. Due to their very white flesh, they’re also called “Snow Apples”. Also, this variety is able to tolerate extremely cold winter temperatures.

Sourced from Massachusetts in the early 18th Century. This was a major New England apple variety until the big freeze in 1930, when almost all the trees were killed off. The original apple tree grew in Wilmington, Massachusetts, and its site is now home to a celebratory monument.

Fruits of this well-known variety are hard and handsome, deep red in colour, with a great flavour. It’s the perfect baking apple for American apple pie. Suitable to grow in zones 4–8.

Cortland originated in upstate New York in the late 1880’s, and the fruits have a crisp texture and well-rounded flavour, perfect for pies and baked desserts. Above all, the fruits keep their colour when cut, unlike many varieties that brown quickly.
Grow it in zones 3–8.

This gorgeous variety has russeted golden skin and crisp, sweet, flesh the flavour of ripe-pears. This Golden Gem was found by chance, growing as a seedling within a hedgerow in the early 1900s. Fruits have a wonderful flavour and pale yellow flesh.

This cultivar’s popularity as a top dessert/eating apple has never waned, and it’s perfect for zones 1–9.

A highly regarded eating apple, originating from Hubbardston, and the pride of Massachusetts in the late 1700’s. “Nonesuch” is a version of “nonpareil”, describing its delicious flavour as the greatest of all apples: unparalleled.

Large fruits have orange-red, slightly russet skin, and crisp, creamy flesh. Furthermore, this outstanding variety is the perfect partner for cheese and port. Suitable for growing in zones 3–6.

This cultivar is one of the best eating apples in the USA, and was discovered near Esopus, New York, in the 1700s. Fruits have red-orange skin and a distinctive blocky, oblong shape, for which they’ve become most renowned. Most noteworthy, it was was one of Thomas Jefferson’s favorite fruits.

This late-season apple improves with age and keeps well in cold storage. Plant these trees in a full-sun site for best results, in zones 4–7

Originally found as a seedling in Oxford County, Maine, back in around 1790. Black Oxford is a good-quality, hardy, traditional eating apple. Black Oxford fruits are medium sized, deep-purple to black, with very white, sharp-sweet flesh.

These apples are incredibly popular amongst home growing enthusiast. Also, use them for cider making, cooking, and eating fresh. Additionally, not only are the fruits something of a spectacle, their spring blossoms are rather spectacular too. Above all, this heirloom tree’s excellent winter hardiness makes it perfect for zones 3–6.

Now it’s time for you do your own research to determine which varieties are most suitable for your garden.

Nothing beats the satisfaction of growing your own fruit and vegetables, especially when it comes to harvesting plump, ripe fruit fresh from the tree. Makes me hungry, just thinking about it!