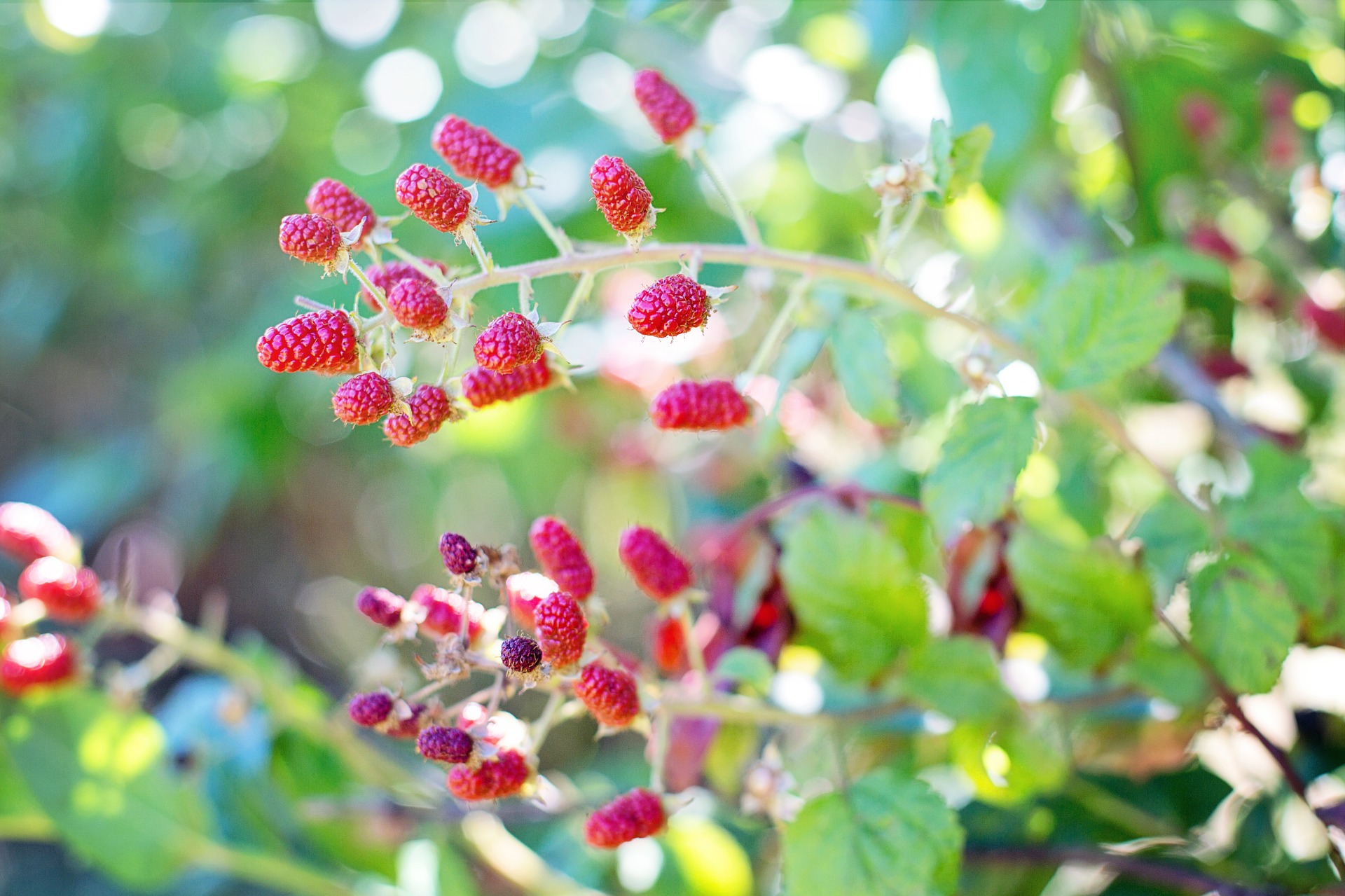 Growing raspberries is rewarding for any level of gardener. They’re hardy, cold tolerant, and easy to grow with few issues. As long as you heed a few simple rules for growing happy, healthy berry bushes, your garden is sure to reward you with healthy crops of these gems.

All About Growing Raspberries

Enjoyed fresh off the bush, baked into scones, or sprinkled on ice cream, raspberries are a classic flavor favorite and freeze nicely for year-round treats.

They’re also a great healthy pick, packed with vitamin A, B6, C, E, and K, as well as copper, iron, magnesium, manganese, and potassium. They’re packed with folic acid, niacin, and riboflavin too, according to Nutrition and You. Below are some of the best varieties to choose from.

These vary by zone, so be sure to check the Old Farmer’s Almanac to see which planting zone you live in.

How to Plant Raspberries

To start growing raspberries, try any of the varieties above that match with what you’re looking for in a plant. Be sure to note which zone you’re in, and which area of your garden gets nice morning sun and afternoon shade.

Summer-bearing plants, such as Royalty Red, are perfect if you only a large crop in summer only. In contrast, ever-bearing varieties, like Dorman Red, will keep you stocked for as long as the weather stays somewhat temperate.

When choosing canes, look for robust and sturdy green stems with a good amount of foliage. Start out with the best plants possible to ensure success. Just like strawberries, raspberries are remarkably easy to transplant, as long as you give them a nice bit of mulch and some organic fertilizer, and pack the soil well around the roots.

Plant in zones 3-9, depending on which variety you’ve chosen. Raspberry Shortcake can be planted in a container since it’s a dwarf variety. Grow full-sized varieties in prepared beds and allow them to flourish there undisturbed for the best fruit yields.

Soil PH for growing raspberries should be between 5.5 and 6.5. It can be sandy or clay soil, as long as there’s good drainage, and it’s free of weeds. Soak the raspberry roots for an hour or so, and then place in a bed prepared with a couple of inches of manure or organic compost. Ensure the soil is dug deeply for good drainage, and space the plants at least 18 inches apart, tightly compacting the soil around the roots.

If you want to allow your raspberries to overwinter in a greenhouse, plant the canes in 3-gallon containers. Move these inside by mid-December to allow a chilling process. The greenhouse should be kept at 55 to 65°F. Your plant may flower after about 6-10 weeks and reward you with batches of fresh fruit starting in March.

Some varieties require a basic trellis system to give the plants something to grab on to, particularly if they have a vining habit or have less sturdy canes that need support. Something as simple as bamboo canes posted around the bed and wrapped with twine can work in a pinch. Of course, since raspberry plants are perennials and will produce year after year, you might want to build the bed near a fence or construct a permanent trellis.

How to Care for Raspberries

Raspberries love the sun, and are happiest with morning ray and a bit of afternoon shade. Many varieties can withstand full sun as well, as long as they get plenty of watering. Soil should be moist, but never wet, as this will cause root rot, destroying your plants.

Fertilize twice a year with a good 10-10-10 fertilizer, as raspberries thrive on nitrogen. Keep the soil free of weeds to allow for healthy suckers and new canes. Mulch with a thick layer of kelp around the bed to keep weeds down and retain moisture in the soil.

Growing raspberries requires some patience, as most varieties will only fruit during the second summer after planting—approximately 16-18 months. Prune back woody second year canes after berries have grown, and avoid pruning the green stems. These will become the next years’ canes for new fruits.

To avoid overcrowding and lack of fruit production, trim the majority of the new shoots to allow the plant’s energy to go towards producing flowers and fruit. Canes should be thinned to eight inches apart each spring. As a reward for happy plants, you’ll see white or pink flowers in spring, followed by a crop of delicious summer berries.

Red and yellow raspberries: In the fall, prune any canes that produced fruit right down to
the ground, and thin canes out to around 6 per square foot. In spring, prune only about 25% of each cane to ensure the plant will be able to produce a good yield.

Black and purple raspberries: In the fall, cut down any canes that produced fruit right down to the ground. Before spring growth begins, cut back side branches to approx. 12 inches.

Ever-bearing varieties: Cut down all canes to the ground in the fall, and again in the spring before any spring growth begins. These varieties only produce on first-year canes, and will produce brand new canes in the spring and summer.

Bunnies like to munch on raspberry canes during the winter, so consider fencing the bed off with chicken wire to protect the dormant plants.

Be on the lookout for pests like aphids, mites, leaf borers, and fungal diseases like powdery mildew. Some diseases are just luck of the draw and can’t be prevented, but they can be controlled by eliminating affected plants as soon as possible.

If mites or aphids start to invade your raspberry patch during the summer, treat the plants often with an insecticidal soap spray.

Cane borers are pests that chew tiny holes into the canes. If your plants are affected by them, trim the canes down to below the hole made by this little pest. This will destroy the larvae. Burn any canes you remove to prevent further spread.

Remove any plants affected by viruses, generally transmitted by aphids. These plants can’t be cured and will stop producing in 2-3 years.

Root rot and powdery mildew are caused by improper watering. To avoid this, water the base of the plant only and avoid getting the foliage wet. These plants can be saved as long as affected canes and leaves are disposed of. Destroy the affected material and don’t try to compost it.

Verticillium wilt is typically caused by keeping raspberries where tomatoes used to be planted. Foliage will turn yellow and fall off, and the affected plants should be destroyed.

To avoid fungal diseases, don’t plant your raspberries where eggplant, potatoes, strawberries, or tomatoes have grown before (at least in the past five years). Raspberries have many options for companion plants that can help to repel wildlife like rabbits, deer, and insects, and fungal diseases, such as:

These berries thrive on pollination, so plants that attract bees are a great choice for companions. More bees = more raspberries. Great companions for raspberries include:

A surprising companion for raspberries is the humble turnip, which can repel harlequin beetles. This beetle commonly destroys cruciferous vegetables and a wide variety of fruit trees and vines.

Your raspberries are ready to be picked once they’ve changed from green to red/yellow, or from red to black. They’ll come off the stem and core of the berry with a gentle tug. As mentioned, for many varieties, you won’t have berries until the second year after planting, but it’s well worth the wait.

Place the picked berries in a single layer in a lidded container, to keep them fresh until you’re ready to snack or create your dessert. Remove any debris, but don’t wash until they’re ready to eat—they’ll spoil much more quickly that way.

Refrigerate right away and eat them within 2-3 days, or freeze them. To freeze for later, rinse them with cold water, let them dry, then freeze in a single layer on a waxed papered baking sheet until they’re solid. Transfer into a freezer bag and enjoy having them on hand to enjoy in oatmeal, muffins, smoothies, on cheesecake, and any other way you like them.

There are many different varieties of this tasty berry available. You can grow your own, year after year, without the hefty grocery store price tag. Just choose a variety that speaks to you, and check with a local garden center to make sure it’s the right type for both your growing zone, and the space you have available.

Once the canes are established, it won’t be too long before you’re growing raspberries right in your own backyard!