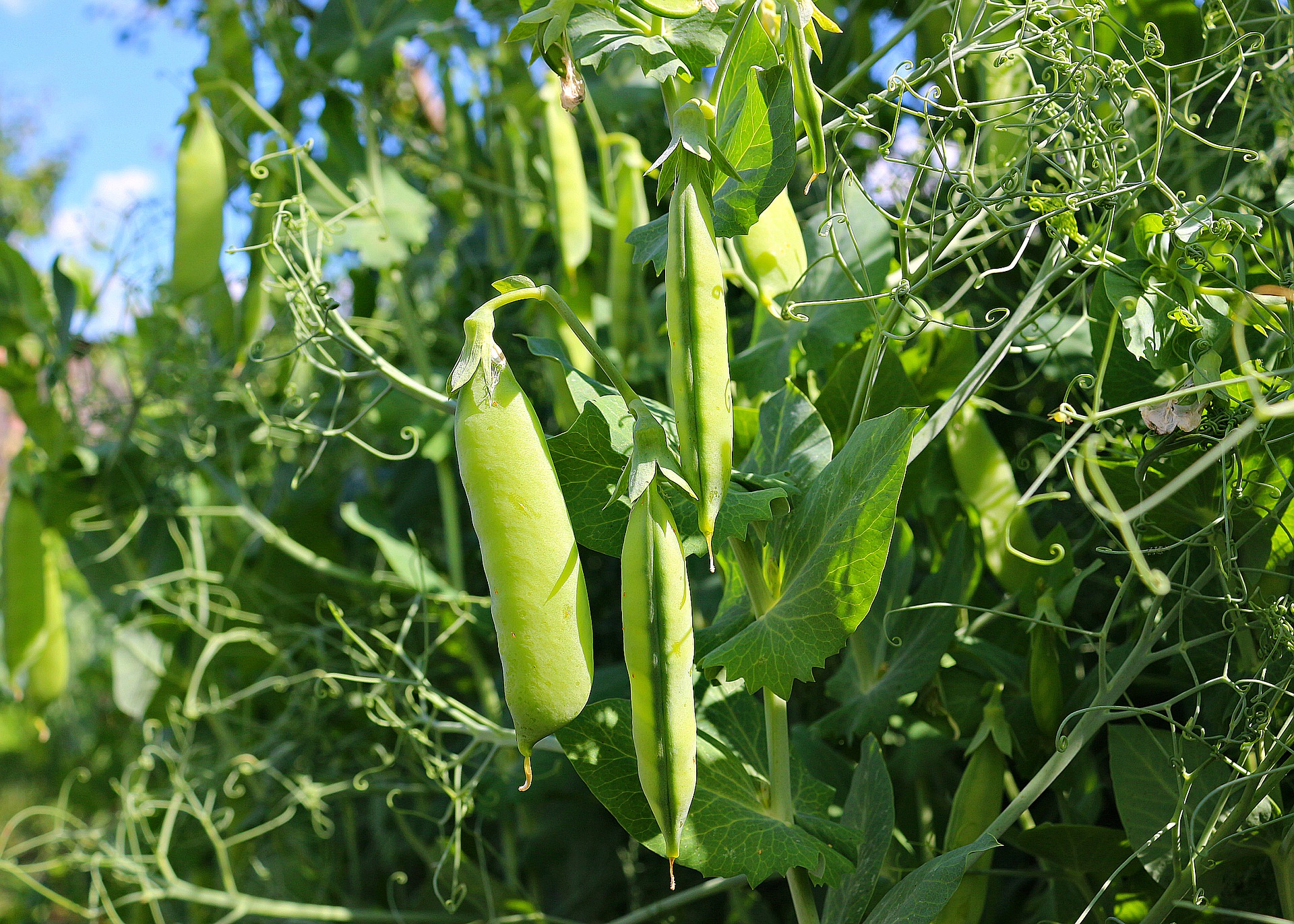 Humans have been growing peas to eat for thousands of years, and with good reason. There’s nothing quite like the sweet taste of freshly picked garden peas. Additionally, since they’re packed full of vitamins A, B-1, B-6, C, and K, these little legumes are also very good for you.

Peas are an easy-to-grow, reliable addition to any vegetable garden. In addition to the traditional shelling variety, you can also grow edible podded varieties such as Sugar Snap. Since they vary so much in size, color, and flavor, there’s a pea variety out there for everybody.

If you want to give peas a chance, here is everything you need to know.

Peas can be divided into 2 categories: shelling, edible podded types. In each category you’ll find a wide variety of options to choose from.

These are grown for the peas that are nestled inside the pod. Once harvested, the thick, inedible pods are discarded. One of the most popular varieties of shelling pea is Petits Pois. These are bred to produce sweet, tiny little peas.

Shelling peas can also be divided by the time it takes them to develop and their height and spread:

Tall: Up to six and a half feet.

Harvestable at different stages of maturity. Varieties include the attractive purple Shiraz, Mangetout, and Sugar Snap.

As you can see, there’s a wide variety available if you want to begin growing peas. Take the time to find something that best suits your garden.

For example, if you’re growing peas in containers, try sowing early varieties. These crop quickly and some—such as Half Pint—are bred specifically for pot growing. This makes it ideal for a container vegetable garden. Half Pint’s initial growth is also compact enough to grow in a cold frame or greenhouse for a really early harvest.

Another great choice for gardeners with limited space is Maestro. This is a medium-sized, robust, heirloom variety. Additionally, this shelling pea produces about 10 peas in each pod. Despite being a heavy-yielding variety, it’s a small, compact plant that only reaches about 30 inches in height when fully mature.

How to sow Peas

The most difficult part of growing peas is deciding which variety to grow. Once you’ve made this decision, everything else is fairly straightforward.

Peas can be sown from late February until June, depending on the variety. In fact, in some parts of the U.K., it’s traditional to sow peas on St. Patrick’s Day.

If you live in a colder climate, or if you just want an earlier start, try sowing early varieties under covers in the fall or winter. You can sow outside over the winter months in milder climates. That said, you may lose some plants to mice or inclement weather.

If space is at a premium, then sow the plants under cover, transplanting them outside when space becomes available. The easiest way to do this is to sow in a length of guttering. You can then simply slide the row into the ground.

Sow peas directly into the ground in a full or partial sun location with well-draining soil. Peas, as well as other legumes, will actually improve your soil by adding nitrogen to it.

Soil temperature should reach 50F before planting. Warm the earth for very early varieties by covering the area with cloches for about a week before planting. This traps heat in the soil, warming it, helping to speed up the germination process. Later sowings won’t require this.

Sow peas in flat-bottomed trenches that are about 6 inches wide and about 2 inches deep. Space the peas about 3 inches apart, with taller varieties requiring more space than dwarf peas. Cover the seeds and water in.

Seeds need to be protected from birds, so cover the trenches with chicken wire or netting. You can remove the netting following germination.

Successional sowing, every 10-14 days, until June allows for a steady supply of peas throughout the spring and summer months.

Peas are a cool season crop, preferring temperatures of 55-64 °F. They struggle in the warmest months. Gardeners in warmer USDA zones will struggle to grow later varieties but will be able to grow earlies.

As long as you keep the beds weeded and well maintained, growing peas is a very easy process.

Water regularly so you don’t let the plants dry out. Be sure to water well when flowering begins, and again 2 weeks later. If the plants don’t receive enough water their pods will struggle to swell.

Unless you’re growing in particularly poor soil, your peas won’t require any additional fertilization. That said, a liquid comfrey feed can be applied following flowering. This help pods to form. Just don’t apply a nitrogen-rich fertilizer, as it’ll encourage leafy growth at the expense of pod production.

Mulching around the base of the plants will help to improve soil moisture retention.

Most pea varieties will require support. Some dwarf varieties are self-supporting and won’t require staking. The best time to put the support in place is when the plants are young.

Peas produce tendrils that they use to climb anything that they come into contact with. As a result, your chosen support should be thin enough for the tendrils to be able to wind around. Large twigs are commonly used, as are bamboo canes. Additionally, a row of netting or twine is a good alternative, especially at the back of a bed. You can also get creative, and make your own upcycled trellis to really add some interest to your garden.

Make sure the structure is firmly fixed so that the weight of the crop wont pull the support over.

As we’ve noted, birds, and mice often target freshly sown peas. Covering with cloches or netting prevents birds from pulling up your seeds. In addition, a natural method of protecting against mice is to lay spiky gorse clippings or holly leaves on the seeds before covering them with soil.

Slugs and snails also target young seedlings. While there are chemical controls available, there are also a number of natural methods to fend them off.

As the name suggests, this moth lays its eggs on flowering peas. These eggs hatch and target the pea pods, growing into caterpillars and destroying your crop. If this moth is an issue, cover the plants with a fleece or netting. Pea moths are active from mid-May to mid-June. Sowing early or very late reduces the risk of your crops coming under attack.

This is often a problem with later sowings, but you can purchase disease-resistant varieties. Alternatively, try keeping the soil moist and growing in cooler locations. This reduces the risk of powdery mildew from striking.

Growing peas alongside aromatic herbs such as cilantro and mint is mutually beneficial.  Leafy greens such as spinach and lettuce also compliment these legumes.

Beans, cucumbers, radishes, and carrots also make for good companions as do members of the brassica family such as cauliflower and broccoli. Tomatoes, parsnips, potatoes, eggplants, turnips, and corn also all do well when planted near peas.

Peas struggle to grow in proximity to members of the allium family, such as garlic and onions. Peas also appear to dislike gladioli.

When you harvest depends on the variety you’re growing. Shelling peas can be harvested when the pods are swollen. In contrast, edible pods, such as mangetout, can be picked earlier, when they just begin to show the signs of pea formation inside the pod.

Harvest from the bottom of the plant upwards. This is because lower peas are more mature than pods higher up the plant. Carefully remove the pods, trying not to damage the stem. Check under the foliage for any hidden pods.

Fresh peas often taste the sweetest, and can be kept for a week in your fridge’s salad drawer. Any longer than this and they’ll begin to lose their sweetness.

Freeze gluts of peas to preserve their flavor.

Saving peas to Plant Next Year

Peas will self-sow if you don’t harvest all the pods. If you want more control over where your peas will appear next year, dry some mature pods until they turn brown and harden. You’ll hear peas rattling inside if you shake the pod.

You may need to take the plants up and place them in a dry location such as a shed or garage to fully dry. A warm location with a good airflow is ideal.

When the pods start to crack, shell the peas and allow them to dry for about a week. If the peas aren’t fully dry, they’ll turn mouldy and spoil.

Once dry, store them in an airtight jar or tin. Label with the variety and date. Peas will keep for 2 years before starting to lose their viability.

Peas are easy to cultivate and harvest, and a great place to start if you’re new to vegetable gardening. Whether you have lots of space or just a few containers you will find a variety to suit you. Growing them is also a great way to introduce children to the joys of vegetable gardening.