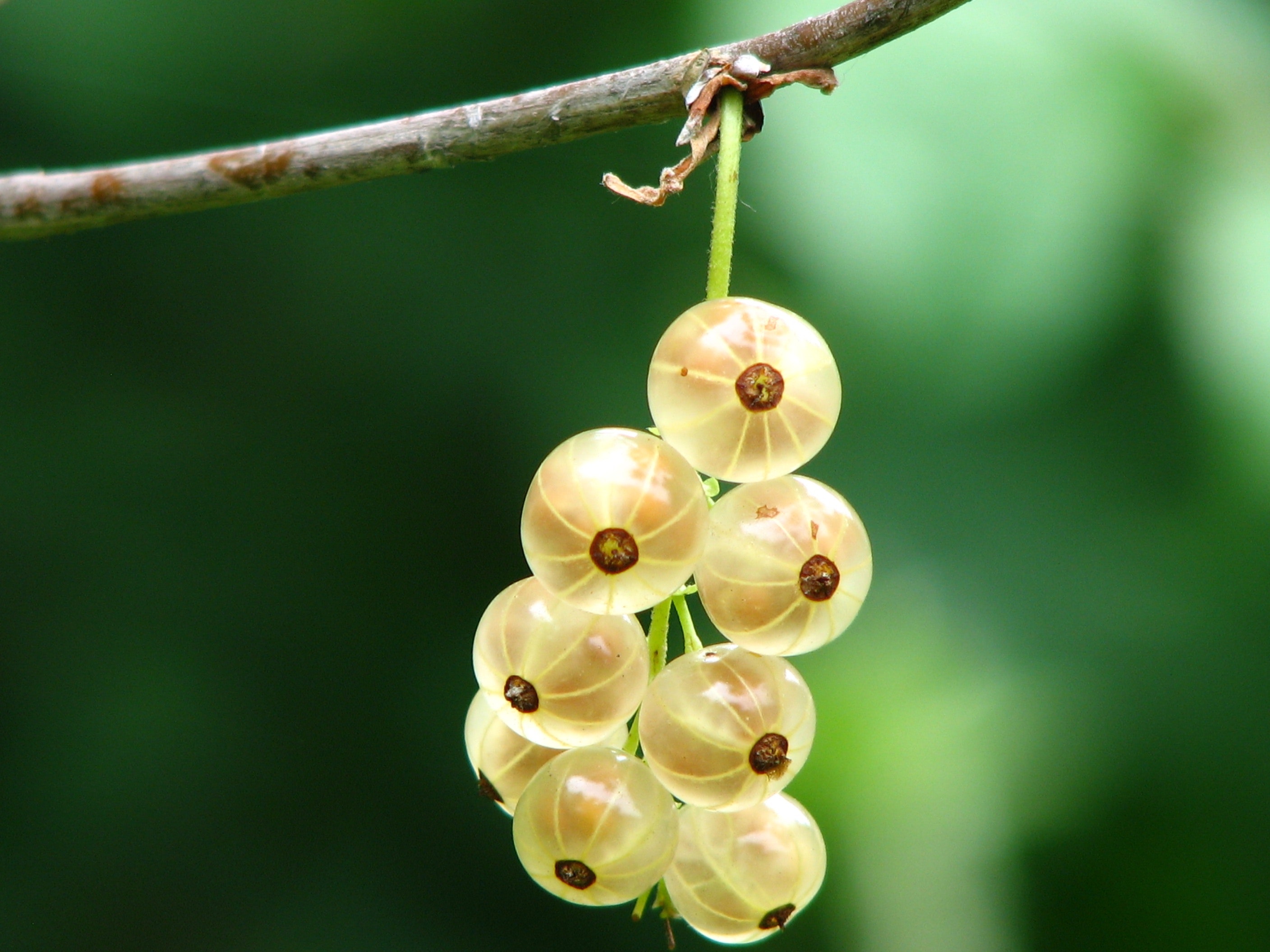 Although they aren’t the typical go-to berries in North America, gooseberries are long-time favourites in Europe and Asia. The beloved gooseberry might be better known by its name than its appearance. Its name originates from the mis-pronunciation of the Dutch “kruisbes” and German “krausbeere“. These lovely little gems are called groseilles de maquereau in France, which translates to English as mackerel berries. This term comes from a popular French dish in which cooked mackerel is served with gooseberry sauce. Gooseberry’s Latin name is Ribes uva-crispa. Since they are from the Ribes family, they’re distant cousins to currants.

Their fruits come in many different varieties, but all gooseberries share a one common trademark. They have a thick, transparent skin layer, which displays their inner flesh in all of its glory. That flesh can be green, red, white or even yellow, depending on the variety. Gooseberries are described as having a tart and grape-like taste. These versatile fruits grow well in containers as well as fields, and are great additions to permaculture gardens. They’re so versatile, who wouldn’t love to grow these beautiful berries at home? Here is a how-to guide on everything you need to know about growing and enjoying this wonderful fruit.

How To Grow Gooseberries

Gooseberries can be a stubborn plant to grow and manage, but you’re bound to get the hang of it in no time!

Gooseberries require very specific growing conditions in order to thrive in your garden. Since these picky little fruits originate in central to northern Europe, they prefer cool, damp climates. This means that they’ll need partial shade if you are trying to grow them in a hot climate. If you’re in a cooler growing zone, they’ll need at least partial sun to thrive.

Make sure you water them regularly. If the watering process is inconsistent, then their skin is likely to crack, much like tomatoes. Don’t water them too often, but rather stick to a solid schedule. In terms of soil, gooseberries grow better in well-drained soil with moderate nitrogen levels. Sandy, loamy, and alluvial specialty soils are ideal.

All gooseberry varieties need to be planted in either the early spring or late autumn. This way, the soil is still warm enough for roots to develop, and just cool enough that they won’t be forced into a growth spurt. Since they can be difficult to cultivate from seed, you should purchase a mature, 2-year-old bush.

Dig a hole that is approximately 1 foot deep in order for the roots to be held firmly. Cover the roots with a combination of the remaining soil, and some mulch. If you plant your berries in a garden bed, make sure to have at least a 1-meter circumference of space around each bush. Water sparingly, and allow long stretches of time in between to allow water to drain. Make sure you prune the bush regularly to promote healthy stem development.

Members of the Ribes family (gooseberries and currants) are self-fertile, and insect pollinated. This means that you don’t have to plant different varieties so they can cross-pollinate. Of course, if you plant two or more different cultivars, you may get larger yields. The downside is that they won’t produce consistent fruit: they’ll be interbred. If that’s not an issue, plant away!

How to Keep Birds and Pests Away

Considering the plant’s name, it’s not surprising that birds of all species like to snack on gooseberries. I should also add that it’s not just birds snacking, but a whole range of other predators. Mites, flies, bugs, maggots, moths, rodents, and other pests love them as well. The most common creature that preys upon them is the gooseberry sawfly. It has a black body with six legs, transparent oval wings, and starts attacking plants around early April. Its larvae—which look like a yellow and black caterpillars—also like to join the feast.

There are many different ways in which you can protect your bushes. One method is to cover the plants with netting. This is a favourite among home gardeners, since it keeps away the biggest predators (birds) and negates costly and dangerous pesticide use. Farmers don’t typically use this method as it is ineffective against insects, as well as inconvenient on a large scale. Just imagine having to cover acres of berry bushes in nets! Pesticides can tackle the bug portion of the pest population, and saves the time that netting would require to set up. There are safer pesticides on the current market that are safe for food-yielding plants.

If you are up for an experiment, you can also make your own natural pesticide. Use a blend of cayenne or chilli powder, dish soap, and oil, which have all been proven effective against pests. One thing to remember is that hygiene is essential for your plants’ lasting good health. You should clean them regularly to avoid unwanted pests. For example, do daily leaf checks where you can pick off harmful larvae, and harvest berries regularly to avoid fruit rot.

Who would have guessed the most intricate part of the growing process would be the harvest? Expert farmers agree that gooseberries should be picked early in the summer, before they ripen completely. This allows them to keep the desired tart flavor, and also avoids unwanted birds snacking on the fruit.

That said, if you grow a green or yellow variety, this type of early harvest is unnecessary. Birds register light colours as unripe, and lighter-coloured gooseberries will keep their tartness into full maturity. In addition, when harvesting gooseberries it’s best to leave a few berries on the branches, as this promotes the plant’s overall regeneration.

Gooseberries, like most cultivated plants, come in many different varieties depending on location and cultivation practices. Usually, botanists separate gooseberries into two separate categories: American and European varieties. That said, this separation is purely due to region, rather than cosmetic differences. As such, picking the right type of berry bush for your garden can seem like a daunting task. To help you out, we have chosen three of the top gooseberry varieties available.

This European variety is a top favourite for many reasons. To begin with, Leveller has one of the highest berry yields per harvest among all the gooseberry cultivars. Their berries are also quite large compared to others, and are a beautiful yellow color when fully ripe. Experts agree that this is one of the best varieties for jams and preserves.

Invicta is a well-known and well-loved American variety, thanks to its resistance to diseases and pests. Its berries are on the smaller size,  and have a green hue when ripe. Its berries have quite a tart flavor, so it’s not ideal to eat raw. Instead, it’s best used in dishes such as the popular French mackerel sauce. You can even use it as a substitute to traditional Thanksgiving cranberry sauce.

This European variety is a rich purple colour when ripe, and is known for being incredibly juicy. It has won numerous awards for its super sweet taste, and is a great variety for home gardeners. Pax, which means “peace”, also has an earlier maturity rate, giving its berries enough time to fully grow and develop their sweetness. It’s an ideal gooseberry for pies, crumbles, and other popular desserts.

Enjoying the Fruits of Your Labor

As I mentioned earlier, gooseberries are known for their grape-like flavor. This is one of their positive features: they also have a slimy inner texture, thick skin, and prominent seeds. These combined traits might not make them anyone’s first choice for a quick snack. They’re so delicious, however, that people have found several other culinary uses for these interesting plants. Luckily enough, after centuries of experimentation, chefs around the world have come up with many tasty meals. These include (but are not limited to) desserts such as pies, tarts, and crumbles, sauce for cooked fish or fowl, jams, and even beverages such as beer and wine. Feel free to experiment and come up with your own delicious dishes!

It’s possible that one of the reasons why gooseberries are talked about at all is because they are unconventional. Gooseberries are foreign to most North Americans. Most have grown up eating strawberries, blueberries, and raspberries, so these fruits are new and exciting. They’re also unusual in flavor, tasting somewhere between grapes and kiwis. As such, a lot of chefs enjoy experimenting with them to come up with new taste combinations.

Which traits are you most interested in? Do you want to grow interesting perennial berry varieities? Are you a health fanatic looking to load up on your vitamin C and vitamin A? Gooseberries have those in abundance, and they’re also packed with protein and Omega-3 fatty acids. They’re also rich in antioxidants, can help slow the aging process, and can even boost your immune system. Know what’s really great about them? They’re one of the rare berries that regain their nutritional benefits after being preserved.

Whether you eat your home-grown gooseberries raw, canned, or baked in a pie, we hope you enjoy them!