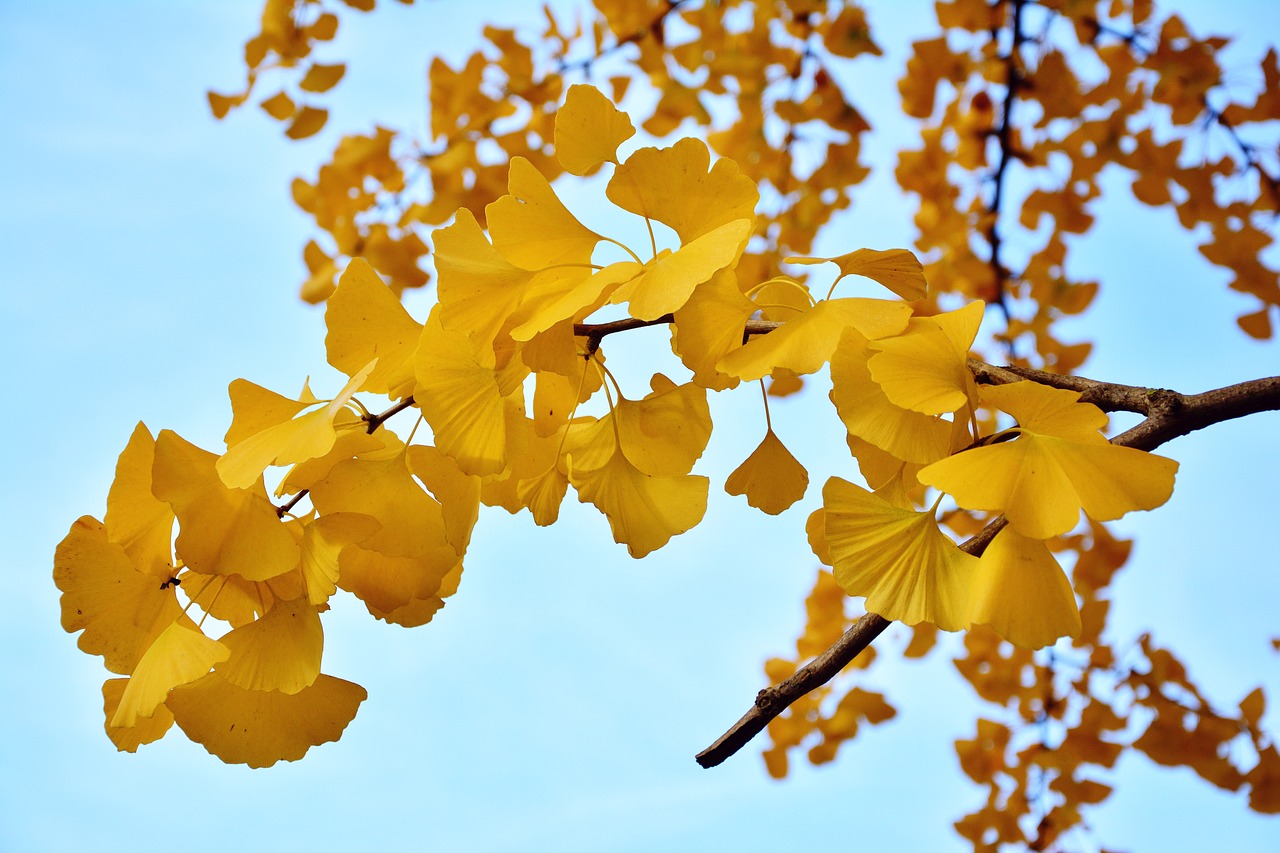 Ginkgo biloba is a graceful, long-lived tree. The last living species of of its kind, ginkgo is ancient and beautiful. With every other species being extinct, this is an utterly unique plant. Ready to learn all kinds of interesting ginkgo tree facts?

Ginkgo is a popular, graceful addition to urban landscapes. Its reputation as a memory booster makes it popular in natural wellness stores as well. Of course, there’s so much more to the Ginkgo plan than its ability to improve memory and beautify cityscapes.

Let’s take a look at this mysterious and beautiful tree and learn some of its more unusual secrets.

Ginkgo biloba is popularly known as the Maidenhair tree. Its leaves look similar to the common maidenhair fern that abounds in England, which is one reason for the nickname. The other is the cascade of golden leaves that grace the tree in fall.

Its leaves are well loved by urban planners because of their graceful shape and bright yellow, autumnal color. Ginkgo trees tend to turn gold all at once, creating an absolutely stunning display.

This tree is native to China, where these trees for their symbolic representation of yin and yang, as well as for their many uses in Traditional Chinese Medicine (TCM).

Since these trees can live for over a thousand years, the trees are considered symbols of longevity and good health.  Give a ginkgo bonsai to an older relative as a birthday present and wish them “100 years” of happiness!

One of the most interesting ginkgo tree facts is that urban planners only use male ginkgo trees for ornamental growth and landscaping.

This is because female trees produce a foul-smelling seed (or fruit). The fruit stinks like rancid butter, which is designed to attract carnivorous animals—possibly dinosaurs, long ago! Male trees merely produce pollen, so they’re far more appealing to have around.

Choosing male-only trees can cause some biodiversity issues in cityscapes. Without female trees, ginkgos never have the chance to really settle into a new area.

4. Tougher than the Average Tree

Ginkgos are one of the most hardy trees in the modern world. In fact, some urban trees have been going strong for over 100 years. Here’s a tidbit for you: ginkgos were the first trees to begin growing again after the atomic attack on Hiroshima! Six ginkgo trees survived the blast and are still thriving today.

These really are amazing plants. These trees are even resistant to many insects—they’re actually extremely unattractive to most insects. Bugs tend to avoid ginkgo trees, as the tree emits a toxin that repels them.

Since ginkgo trees repel insects, they tend not to attract many birds either. Birds like to alight in trees to rest and eat. But ginkgo seeds don’t appeal to birds, and the trees are bare of bugs. Therefore, many birds will only stop briefly in ginkgo trees before moving on to tastier pastures.

Ginkgo trees are pollutant resistant as well. These trees can handle conditions that would cause a less-hardy tree to struggle. The average life expectancy of urban trees is about 10 years, because of the pollution and stresses of city life. Ginkgo trees, however, beat all the odds.

7. Either Tall or Tiny

Ginkgos can grow up to 150 feet tall. Left to their own devices, they’ll end up towering above the earth. Of course, when carefully pruned and trained, they can also grow beautifully in miniature form. They’re popular trees in the art of Bonsai, where trees are only allowed to grow about a foot tall in carefully curated pots.

These trees are living fossils. They’ve existed as a species, unchanged, for over 200 million years. Ginkgo fossils dating back to the early Jurassic period have been discovered all over the world. Sometime between the Jurassic and the Pliocene period, ginkgos declined in variety and ended up only thriving in a few areas of China.

Ginkgo is most commonly found in Buddhist monasteries. In fact, the trees have been tended by Buddhists monks for centuries. These trees spread alongside Buddhism to Korea and Japan.

The ginkgo leaf is nicknamed “the fingernail of the Buddha”. This is both because of the fan-shaped leaves, and the devotion Buddhist monks have to the care and propagation of these ancient trees. The cultivation of ginkgo trees by Buddhist monks was a major factor in the trees’ survival. In addition, monks often use ginkgo wood to build monasteries and the furniture within them.

A ginkgo leaf is used as the symbol of the the Urasenke tea school of Japan. The leaf represents happiness and ever-expanding good fortune. Ginkgo’s fan-shaped leaves are thought to demonstrate the ever-widening future spreading out before us.

Many Taoist temples feature an ancient ginkgo in the courtyard. When Taoism was new, shamans would carve spells on the ginkgo trees as a means of contacting the spirit world. One large tree in Shanxi Province of China is believed to have been planted by Lao Tzu, the founder of Taoism.

The Ginkgo tree is the national tree of China, though it was first encountered by westerners in Japan in 1690. The botanist Engelbert Kaempfer was the first to record seeing ginkgo trees growing in the Japanese temple gardens.

Recently, ginkgo has earned popularity as a memory tonic. This reputation is losing footing, with new studies indicating it does less to preserve memory than we thought. Despite this, ginkgo has a significant track record for helping Alzheimer’s patients.

Ginkgo has been proven to be about as effective as the leading Alzheimer’s medication at slowing memory deterioration. That’s great news for patients! It also has less than half the side effects of other treatments.

14. Not Great for Long-Term Use

New research has tentatively linked ginkgo to an increase chance of stroke. The research The study linking ginkgo to strokes seems at odds with ginkgo’s traditional use. For thousands of years, traditional Chinese Medicine has used ginkgo to increase circulation and lower clotting.

Ginkgo has an uncertain link to increased risk of cancer. No-one is sure if there’s actually an risk of cancer from consistent ginkgo consumption, but it’s best to imitate the herb’s ancient caretakers and avoid using it long term. Traditional Chinese Medicine uses it primarily in short-term remedies for specific complaints.

Consume Ginkgo biloba only for short periods, and take time off from regular uss to allow your body to reset.

15. Good for Circulation and Blood Flow

Interestingly, traditional medicine doesn’t use ginkgo for memory issues at all. In Chinese medicine, this is primarily an herb for circulation and blood flow. Ginkgo dries up damp, stagnant conditions, expels mucus, and opens up lungs.

Chinese medicine never uses ginkgo continuously, and always consumes it cooked—preferably in a meal. Modern scientists tend to focus on its leaves, but traditional herbalists have always focused on its seeds.

The ginkgo plant contains a substance called ginkgolide. This is actually what makes ginkgo such a powerful healing herb. It’s the ginkgolide that increases circulation and brain function, reduces free radicals, and reduces clotting risks. Ginkgolide levelss are highest in leaves in the fall, which is also when the fruit appears on the female tree.

Ginkgo can treat depression. We don’t often think of it as a mood-balancing herb, but it is. It boosts the body’s anti-inflammatory function, which helps us cope with stress hormones and the emotional havoc they cause.

Remember how ginkgo increases blood flow and healthy circulation? Well, this effect can improve vision as well. New research is showing that supplementing with ginkgo can help glaucoma sufferers by increasing blood flow to the eyes.

Studies with asthma patients are showing that ginkgo’s anti-inflammatory effects are excellent for increasing lung capacity and reducing asthma flare ups. This research is very new, but results are encouraging.

Ginkgo can do a lot of good in areas as wide-ranging as heart health, vision, mood, and even your love life. In fact, it has been used for centuries as an aphrodisiac, in part because it increases blood flow and reduces anxiety.

20. The Best Place to Grow Them

Ginkgos grow easily in zones 4-9 easily, and are tolerant of occasional cold snaps and droughts. You can plant a ginkgo tree almost anywhere and expect it to do well.

There are no known wild trees. Every ginkgo growing today has been planted or otherwise tended by humans. We’re not entirely sure why it’s no longer a part of the wild landscape, but this ancient tree prefers to be invited into the modern world.

Maybe they know that their time is past. Like the ancestors of traditional Chinese culture, the ginkgo tree watches, guides, and heals. It offers its wisdom and experience to modern humanity, but it’s too old to go wandering on its own through contemporary forests.

You can welcome a ginkgo into your garden, though. These trees are quiet, gentle friends in an otherwise hectic world.