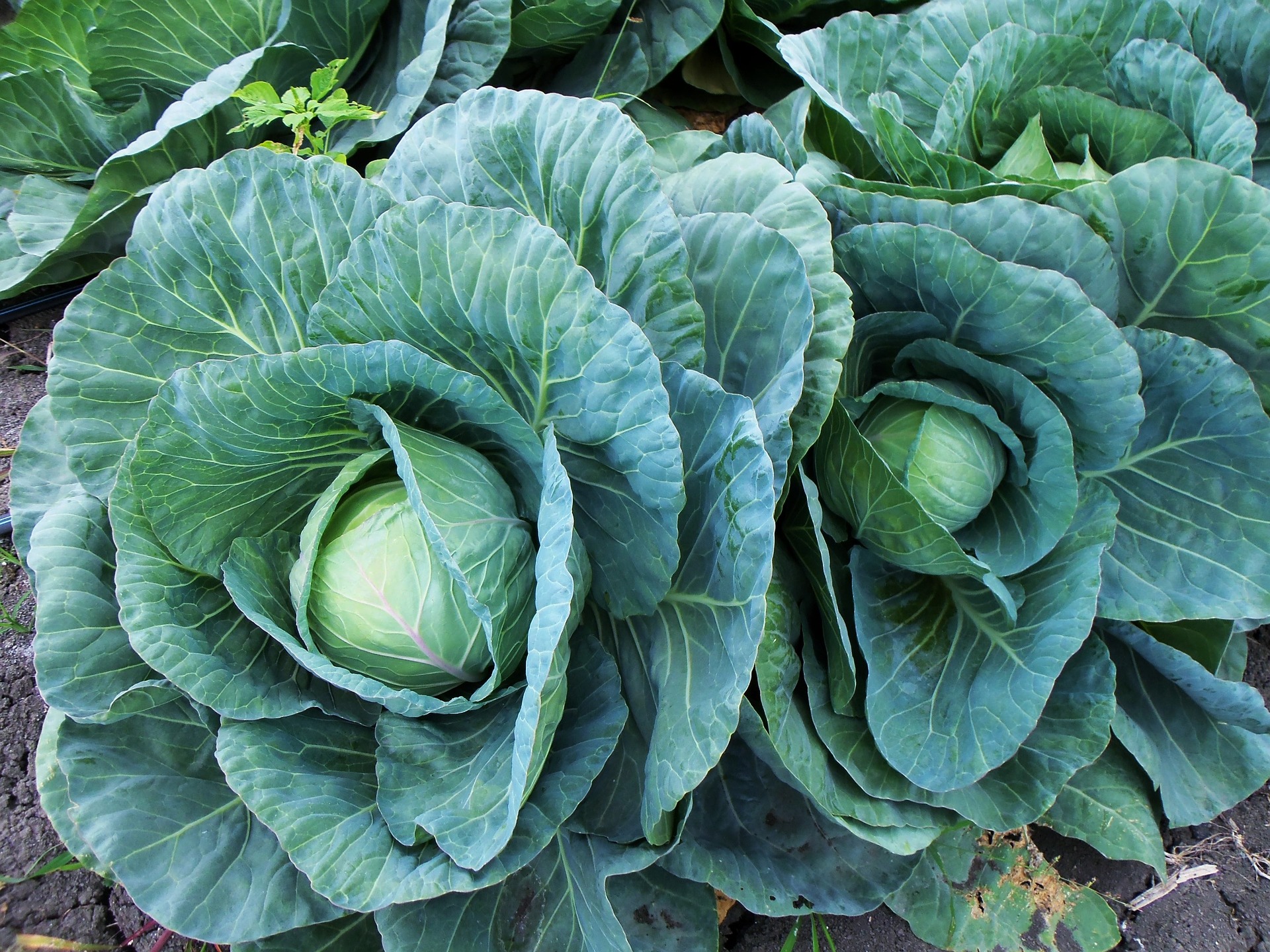 When county fair season arrives, all the giant vegetables get to show off their beautiful shapes, sizes, and colors. There’s just something about seeing a carriage-sized pumpkin that brings out the child in us all. If you love ’em big and juicy, read on to discover 15 spectacular giant veg you can grow at home.

I love walking between rows of massive squashes and cabbages on display. Recently, however, I discovered that giant vegetables come in many different varieties. Apparently massive Hubbards and fairy tale pumpkins aren’t the only giant vegetables around.

In fact, so many vegetables come in extra-large sizes that you could plant a giant’s garden all your own. From radishes to cucumbers, your giant’s garden will be full of a monumental bounty of beautiful produce.

Daikon radishes are large, but the largest of all daikons is the Sakurajima. This massive, rounded radish grows larger than a boule of bread. In fact, it can grow to be over 2 feet in diameter. It’s mildly spicy, gently sweet flavor is an exciting addition to any radish dish. These radishes can weigh anywhere from 13 to 100 lbs, so it’s good to plan out a few recipes before harvesting.
Get seeds at Baker Creek.

If you pick Eckendorfs when they’re young and small, you’ll have a delicious table beet. But, if you let them grow into their 20-pound potential, you’ll have fantastic, homegrown fodder for your farm animals. Once they exceed 5 or 6 pounds, Eckendorfs are too tough and fibrous to taste good at the table, but animals love them.

Growing fodder for livestock is a traditional practice that’s gaining ground again among homesteaders. As a result, these Giant Eckendorf beets are the perfect first step into the world of home-grown animal feed.
Seeds available at Baker Creek.

There’s really nothing like growing a cabbage that’s big enough to rival the ones at the local fair. Huge cabbages are gorgeous, and if you’re into making sauerkraut, the Northern Giant cabbage is an ideal choice. Not only are they delicious—they’re surprisingly tender.

These cabbages can grow heads weighing up to 100 pounds. They’re full of vitamins and minerals, and they’re head-turningly huge. Giant Northerns are pretty enough to use for baby photos as well. The “cabbage-patch” photo works best with giant cabbages that give baby a cozy cradle to rest in.
Seeds available at Hirt’s.

If you want to win the neighborhood squash competition, this is your plant. Giant Show Kings are absolutely enormous. In fact, this squash holds the world record for weight at almost 1500 pounds. It’s ideal for the autumnal garden as well, with it’s spooky, gray-green color.

Show Kings look almost white in the moonlight, and silvery green in the sun. Expect to pay a lot for seeds from this heirloom novelty, however. A packet of two to four Show King seeds often retail for up to 10 dollars.
Some seeds are available via Baker Creek.

Have you noticed that some of the biggest, brightest tomatoes have the most disappointing flavors? There’s nothing worse than waiting all summer for your tomatoes to ripen, only to have them taste like grocery-store produce. Fortunately, Big Zac tomatoes don’t disappoint.

These huge fruits weigh in at 4 to 6 pounds, more than double the weight of other large varieties. Best of all, every pound of Big Zac tomatoes are packed with flavor.
Get seeds at Reimer.

We’ve all grown massive zucchinis, right? The ones you forgot about for a few days until suddenly they were absolute monsters. But accidentally overgrown zucchinis usually don’t taste very good. They’re pithy and dull: all the flavor’s been spread thin.

In contrast, Super Giant Zucchinis are bred intentionally to be big, and there’s plenty of flavor to go around. Regularly weighing almost 15 pounds, these zucchinis will help you fill your pantry, and the pantries of everyone you know!
Some seeds available via Monster Sunflowers on Etsy.

If you’re asking “what on earth is kohlrabi?” then this plant is probably not for you. But, if you’ve tried kohlrabi sliced thin on a bed of greens, in the height of the growing season, get yourself some seeds. Superschmelz is a veritable armful of flavor. At up to 10 inches in diameter and weighing around 10 pounds, these giant vegetables put all others to shame.
Look for seeds at West Coast Seeds.

This pumpkin is a world record maker! Weighing up to 2000 pounds, the Atlantic Giant is a pumpkin that wins state fairs and causes your neighbors to stop and stare. Don’t be surprised if all the neighborhood moms come by to ask for fall pictures of small children sitting tall on your gentle giant.

These pumpkins aren’t pie-making material, however, so grow them as autumn decorations. When you think about giant squash, it’s likely that the image in your mind is an Atlantic Giant lounging in a field. This year, let that field be your field.
Seeds available via West Coast Seeds.

Over 15 pounds at maturity, Zeppelins are huge, yellow vegetables that are, unfortunately, inedible. Grow them to impress the neighbors or feed them to your chickens, but don’t try to sink your teeth into these monsters. Even though they look amazing, Zeppelins are just for show.

If you’re looking for giant and flavorful cucumbers, try growing Armenian Yard Longs instead. These cucumbers are smaller and lighter than the Mammoths, but you might actually enjoy eating them!

Delicious, deep red flesh hides under the huge, dark skin of this massive melon. Black Diamonds can weigh up to 75 pounds at maturity, and they don’t sacrifice flavor for size. With good soil and plenty of water, these melons will average over 50 pounds.

Keep in mind that extra care produces extra-large melons. Give them at least 3 months of growing time after germination for ripe, juicy, crowd-feeding deliciousness.
Get seeds via Urban Farmer.

If you have a lot of animals to feed, this oversized corn is for you! Enormous ears ripen on 15-foot stalks in this big variety. Giant Silo corn is aptly named: it’s easier to fill a huge silo when you’re growing corn this big. But don’t try grilling this corn: it’s strictly a livestock-feeding variety.

If you need a bit of privacy, plant a few rows to stop the neighbors from watching your great, white pumpkins grow. Then, feed the ears to chickens, cows, or pigs when they ripen. Or make an eerily oversized corn-maze for Halloween.
Get seeds via OpCorn.

It’s no 1900-pound pumpkin, but the Full Moon is the largest white pumpkin around. If your childhood was full of Charlie Brown dreams and big Halloween plans, the Full Moon will bring back all those memories. This plant can produce pumpkins up to 4 feet in diameter and weighing over 90 pounds.

Their smooth, white skins glow like the full harvest moon. Grow a field of these magical beauties and project It’s the Great Pumpkin Charlie Brown on the night of October’s full moon. After all, nothing can compete with the Full Moon for setting a mysterious, Halloween vibe.
Seeds are available at the Territorial Seed Company.

This heirloom leek variety is stout and strong, and produces leeks with a girth of over 2 inches consistently. Additionally, this thick and hearty variety is of the best-tasting giant vegetables available. After all, Musselburgh leeks are bred for both flavor and hardiness.

They can grow well into the winter in mild climates and late into the fall in harsher zones. Just one of these full-bodied leeks is enough to fill a recipe. You could be eating creamy leek soup all winter long with a row of Musselburghs.

Additionally, try using them as a strong allium border around the drip line of a permaculture tree guild to keep deer and rabbits away.
Get seeds at Veseys.

It’s hard for peppers to compete with pumpkins and radishes, but that doesn’t stop the peppers from trying. Big Bertha makes all the records for length and weight when it comes to these nightshades. Consistently producing peppers that weigh in almost a pound, Bertha has produced “pounders” as well that come close to breaking records!

Bertha may seem small compared to the other giant vegetables in your garden, but she’s a giant in her own circles. Give her a spot in the sun and she’ll make you proud.
Get your seeds at Bonnie Plants.

No giant garden is complete without a beanstalk! This ornamental bean plant is said to be the exact variety that took Jack up to the giant’s kingdom long ago. The “fairytale sword” bean pods can reach almost 2 feet in length. Jackbeans need a long growing season, and they’re tropical plants that hate the cold.

But, if you plant them with care, and give them space to grow, these pretty beanstalks might just bring you luck. Just like Jack the giant-killer long ago.
Seeds available at Sheffield’s.

Fairy tales are full of giants whose giant vegetables inspired envy from the world outside. Don’t sit around imagining those gardens of old: re-create them in your own backyard! There’s something beautiful, mysterious, and just a little bit overwhelming about stumbling into a garden of oversized vegetables. It makes you feel as though you’ve wandered into a fairy tale yourself.

Make your yard into a beautiful world where everything is just a little too big, and each visitor will feel a bit of childlike wonder all over again.