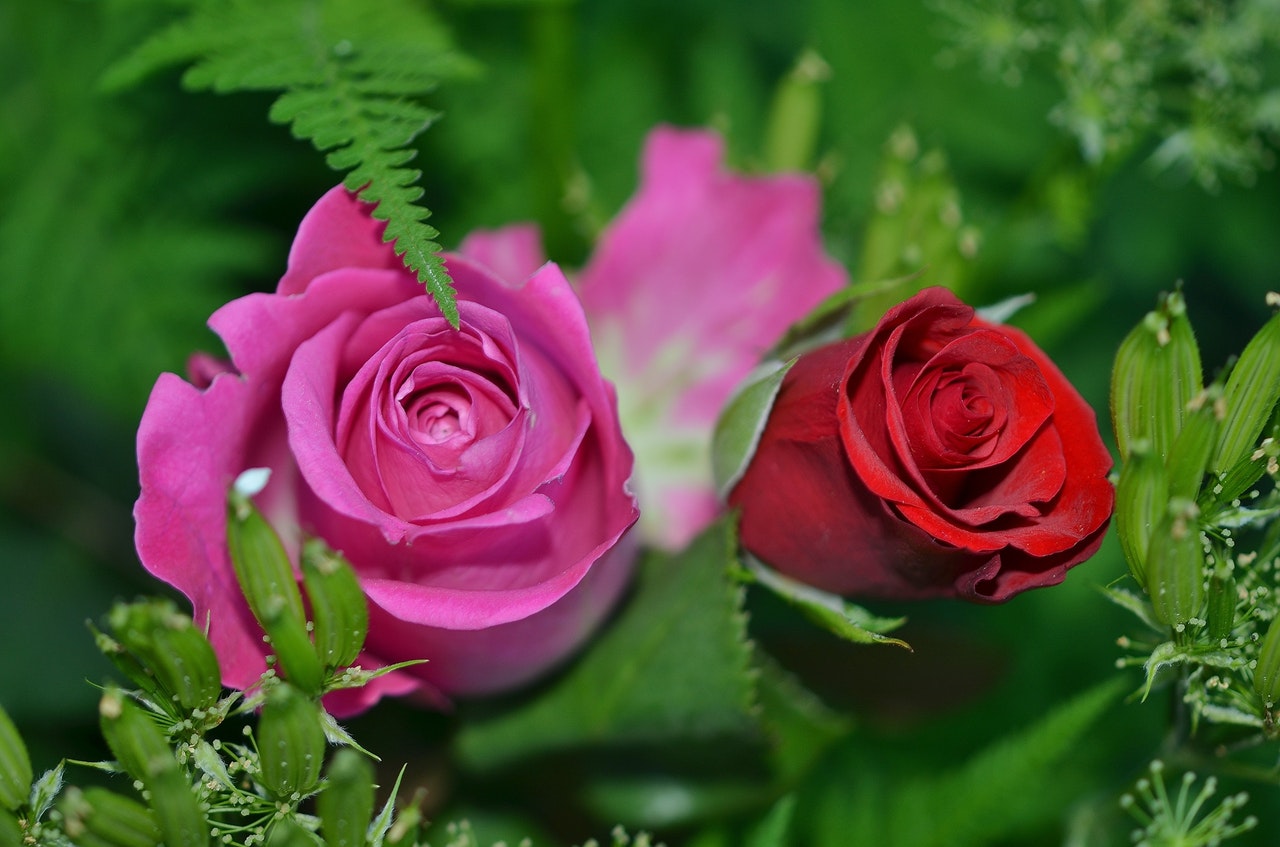 You don’t need to create a full Tudor garden to pay homage to Shakespeare’s splendid stories. Just take inspiration from his plays and sonnets to create glorious flower, herb, and even fruit groupings in your home garden. Read on for 15 Shakespearean-themed flower garden ideas to inspire and delight you!

Gardens were all the rage during the Elizabethan era, and you can see references to flowers and gardening throughout the bard’s writing. He used plants to draw symbolism, explain characteristics, and encompass his visions in the most descriptive ways.

A traditional Elizabethan garden is well documented to have included fruit, veggies, and herbs for both fragrance and medicinal use. The Tudors enjoyed gardens for decorative as well as social purposes, and creating a beautiful garden was considered an art form.

Colors tend to complement each other, and scents were as vital bloom hues. Considering their importance in everyday life, sweet-smelling herbs like chamomile and mint were treasured choices. If you’d like to create a Tudor garden of your own, consider incorporating some of the following plant combinations:

This wildflower garden theme is drawn from A Midsummer Night’s Dream.

Wild thyme has purple and pink flowers and a strong scent. Oxlips are yellow flowers cross-bred from primroses and cowslips. Violets are stunning purple blooms, woodbine is another word for honeysuckle, and roses are the most common flowers in Shakespeare’s work. Combining them all (perhaps with some sweet peas) creates a stunning wild faerie garden.

“I know a bank whereon the wild thyme blows,
Where oxlips and the nodding violet grows,
Quite over-canopied with luscious woodbine,
With sweet musk-roses and with eglantine:
There sleeps Titania sometime of the night”

Imagine the slew of colors created by white daisies, blue-purple violets, and yellow cuckoo-buds. Even better if paired with silvery lady-smock or cuckoo flowers. These plants tend to spring up at the same time as the cuckoo’s arrival in April or May.

Poppies (which are symbols for sleep and death) and a type of nightshade known as mandragora pair well, both in symbolism and in aesthetics. Mandragora is found in the Mediterranean, and the plant’s root (mandrake) is still used for its hallucinogenic properties. Considering the malevolent undercurrent in Othello, the soporific flowers mentioned therein have quite a tale to tell.

“Not poppy, nor mandragora,
Nor all the drowsy syrups of the world,
Shall ever medicine thee to that sweet sleep
Which thou owedst yesterday.”

Shakespeare referred to roses hundreds of times throughout his plays and poems. These stunning blooms were used both in reference to the Tudor dynasty, and to convey love and affection. With so many different rose varieties available, you’re certain to find the cultivar that’s right for you.

“I have seen roses damask’d, red and white,
But no such roses see I in her cheeks…”

“What’s in a name?
That which we call a rose
By any other name would smell as sweet.”

The lily is a symbol of purity, beauty, and grace, typically used to depict a woman’s beautiful pale skin. In fact, during the Tudor period, paler skin was considered a virtue and sign of nobility, unlike that of lower-class workers who tanned darkly from tending fields all day.

“Now by my maiden honour, yet as pure
As the unsullied lily.”

“How bravely thou becomest thy bed, fresh lily,
And whiter than the sheets! That I might touch!
But kiss; one kiss!”

Pansies are often mentioned in reference to Hamlet’s Ophelia, along with daisies. The latter are common in northern England and are often associated with innocence and childhood. In addition, pansies symbolize love in vain, heartbreak, or meaningless love. Rosemary pairs well with fennel and parsley, which are also commonly mentioned in Shakespeare’s work.

“There’s Rosemary, that’s for remembrance;
Pray, love, remember;
And there are pansies, that’s for thoughts…”

As spring and summer flowers, carnations have remained popular English blooms for hundreds of years. Both carnations and gillyvors—sometimes called gillyflowers—come from the same species. In addition, they’re also available in a wide range of colors. If you protect them from harsh winds and cold temperatures, they can bloom clear into autumn.

Elizabethans had various types of mint widely available, including spearmint (Mentha spicata), garden mint (Mentha sachalinensis), water mint (Mentha aquatic), Horsemint (Mentha longifolia), and many more. They were typically used to make medicinal aids or in cooking, and their flowers can come in various shades of purple and white.

“I am that flower

Today, woodbine is used to describe American climbing plants known as Parthenocissus inserta. In contrast, Shakespeare would have used the word to describe honeysuckle. The woodbine we know makes stunning, bright green foliage in spring and summer, while honeysuckle is a fragrant summer bloom.

Honeysuckle symbolizes love, affection, and devotion, because it entwines around any other plant nearby. In Shakespeare’s time, it would have been used to create decorative floral archways. If you’re hunting around for interesting flower garden ideas, be sure to incorporate these two!

“so doth the woodbine, the sweet honeysuckle
Gently entwist”

“And bid her steal into the pleached bower,
Where honeysuckles, ripen’d by the sun
Forbid the sun to enter.”

– Much Ado About Nothing

Lavender and mint are well known for their fragrant sweetness, while savory and marjoram are common culinary herbs. In the Elizabethan era, savory was often used in meat stuffings, sauces, and puddings, while marjoram seasoned poultry, and symbolized happiness and love.

Marigold’s yellow golden hue pairs nicely with the former plants’ rich colors, and it’s another edible herb that can be used in salads and soups.

“Here’s flowers for you;
How lavender, mints, savoury, marjoram;
The marigold, that goes to bed wi’ the sun
And with him rises weeping: these are flowers
Of middle summer, and I think they are given
To men of middle age.”

In Shakespeare’s time, the European sweet chestnut was held in highest esteem. People adored its wild fruit, considering it the best and meatiest you could eat. These trees were introduced to England by the Romans, and the nutes were used as a dessert, especially during winter.

“And do you tell me of a woman’s tongue,
That gives not half so great a blow to hear
As will a chestnut in a farmer’s fire?”

– The Taming of the Shrew

Used as a shrub in Shakespeare-themed gardens, hazel (Corylus) offers traditional appeal. It’s sometimes called an American Hazelnut tree, and the nuts it creates are delicious, and versatile. Just ask anyone who loves Nutella! These plants are perfect as windbreaker hedges, and their fragrant blooms often attract beneficial pollinators.

“O slanderous world! Kate like the hazel-twig
Is straight and slender and as brown in hue
As hazelnuts and sweeter than the kernels.
O, let me see thee walk: thou dost not halt.”

– The Taming of the Shrew

A fragrant and friendly herb, chamomile was used in scented pillows and potpourri, and infused in tea form. It also release a strong scent when walked upon, hence its popularity as a carpet plant and strewing herb. Shakespeare used chamomile to represent humility for this very reason.

Violets in Shakespeare’s era could refer to any number of flowers. It is, however, thought to be a reference to the viola, which happens to also be the name of the female protagonist in Twelfth Night. They symbolize faithfulness and fidelity in Hamlet as well.

They pair beautifully with marigolds in terms of color scheme, and marigolds also do well as companion plants to melons or vegetable gardens.

“The purple violets, and marigolds,
Shall as a carpet, hang upon thy grave
While summers days do last”

Lilies may symbolize purity, but they also were associated with funerals, death, and absence. Since a soul is innocent when it joins the afterlife, these flowers are often used in funerary rituals. In addition, red and white roses are constantly used together throughout Shakespeare’s works, likely referencing the conflict between the Tudor houses of York and Lancaster.

Marjoram is a great companion to most plants, and the roses offer a stunning pop of color.

“Nor did I wonder at the lily’s white,
Nor praise the deep vermilion in the rose;
They were but sweet, but figures of delight,
Drawn after you, you pattern of all those.”

Shakespeare mentioned countless different plants in his works, from grapes and figs to willows and daffodils. If you’re really interested in flower garden ideas based on the Bard’s creations, you might want to explore the complete list of plants mentioned in his plays and sonnets. They can inspire you to combine them in new ways to create your dream garden.