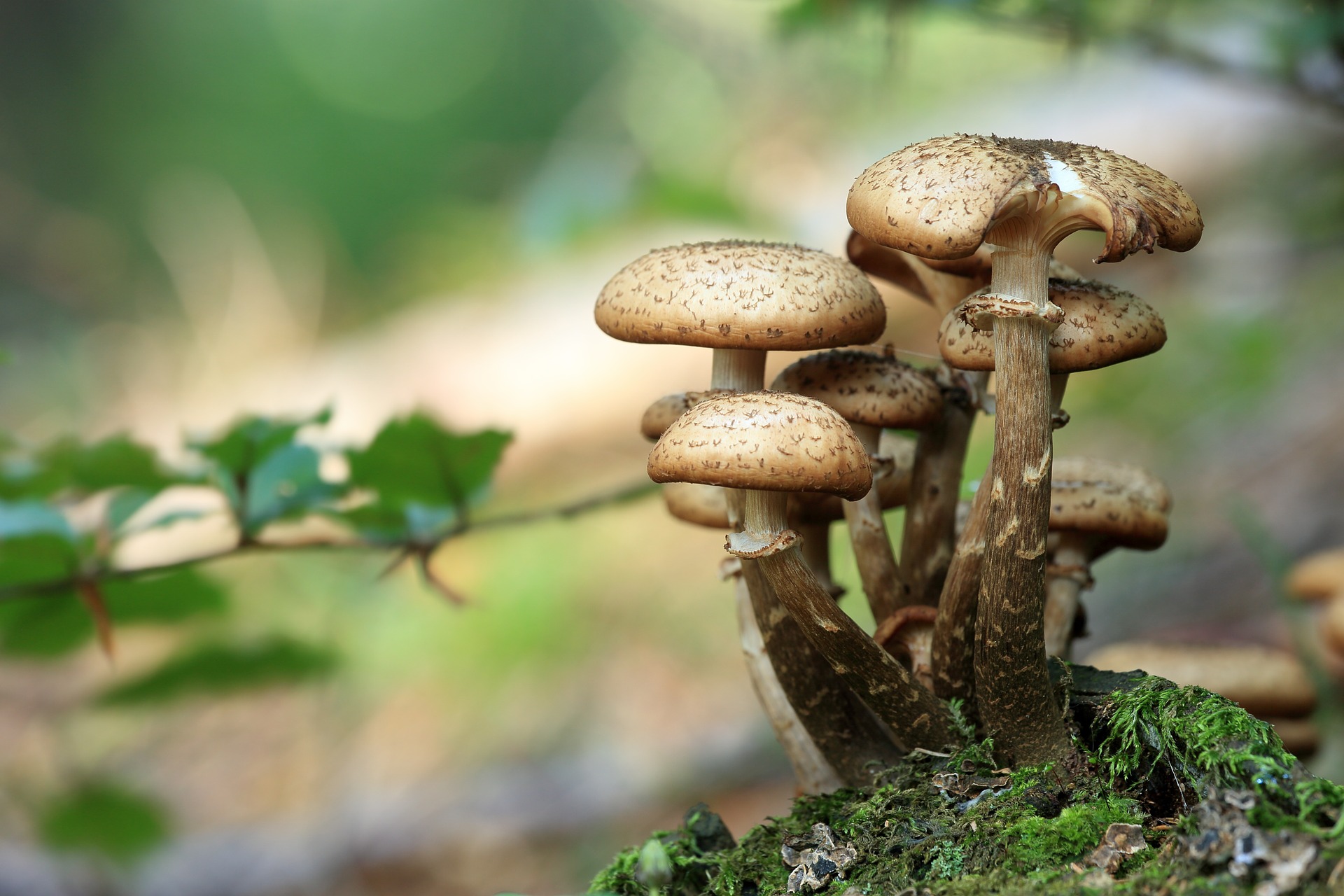 If you’ve never attempted it before, growing your own edible mushrooms may seem difficult, even for an experienced gardener. However, it’s not that strange a crop to grow. It’s also quite easy to grow a healthy, great-tasting crop at home. You don’t even need to spend hours in a dark, damp cellar tending to them! Read on to learn how to grow these delicious morsels yourself.

If you’re a complete beginner, consider a mushroom-growing kit. They’re easy to use and provide you with everything you need. If you’re slightly more experienced—or brave—you can order mushroom spawn and inoculate a log or a purpose-built mushroom bed. Whichever option you choose, you’ll find that growing edible mushrooms is a rewarding and fruitful process.

Mushrooms are also incredibly good for you. Virtually fat- and calorie-free, mushrooms are full of vitamins and minerals. Additionally, as little as 80g of mushrooms will count as one of your 5 fruit and veg a day. Growing your own is also far safer than picking your wild mushrooms, which have many toxic lookalikes.

White caps, or button mushrooms as they’re also known, are among the most common edible mushrooms. If you’re a complete newcomer to growing fungi, then whitecaps are the ideal place to start. Not only are they tasty to eat, they’re also easy to grow. Furthermore, they’re commonly available in easy-to-use mushroom-growing kits.

White caps don’t require sunlight to grow, making them perfect for indoor gardeners. This is especially beneficial if you’ve already filled your window sills with herbs and flowers. You can grow white caps at any time of the year. Unlike other crops—including some mushroom varieties—white caps prefer to grow during the colder, winter months.

Another traditional variety, they’re also known as creminis. These are almost as common as white caps, and just as easy to grow. Additionally, they’re known for their nutty flavor and firm texture, which makes sense, since they’re basically juvenile portabello mushrooms.

This is a warm weather-growing edible mushroom that will happily grow in a small bed of mature compost. When it starts to fruit, the distinctive texture of this mushroom’s cap makes it easy to identify. In addition, growing mushrooms in compost or mulch makes harvesting quicker and easier.

With a little mature compost, mulch, and warm weather your portabello spawn will produce several flushes of edible mushrooms over the course of a summer.

These edible mushrooms are both mild and meaty. In fact, their distinctive flavoring makes them one of the most popular culinary mushrooms. They can also boost the immune system and can help lower cholesterol and reduce weight gain.

Shiitake mushrooms are also easy to grow. They’ll grow either indoors on a mushroom bed, or outside, on pasteurized wood chips or logs. A 40-inch log can, over the course of a couple of seasons, yield up to 4 pounds of mushrooms. Just note that if you choose to grow them outside, they’ll require some shade. Growing them under a porch or in a similar shady location will also allow them to remain moist.

Different types of shiitake are all native to Asia, and will fruit at different times of the year. That said, they’re most successful when started in the fall. Whatever the variety, they usually fruit after a good soaking or rain shower, when temperatures are between 45-85°F.

Morels are some of the most attractive and versatile edible mushrooms. The morel’s distinctive pinecone-shaped appearance is reminiscent of a fairy house.

Young, tender morels, which are rich in the varieties distinctive, nutty flavor, can be cooked whole. Only the caps of older, larger morels should be eaten, because the stems can become overly woody as they age. You can also dry morels for use at a later date, if you have a glut.

These edible mushrooms come in a range of colors, and are incredibly easy to grow. Even the efforts of a complete novice will be rewarded with a pleasing, large crop of oyster mushrooms.

Oysters are best grown outside on soft wood, such as aspen, poplar, or willow. They’ll also grow well on pasteurized straw, cardboard, and coffee grounds. This adaptable nature makes oysters an affordable variety to grow.

Different oyster mushroom varieties will grow best at different times of the year. Whichever variety you choose will give you at least 2 fruitings, but this can be increased with the correct management.

The pearl is an attractive variety of the oyster mushroom family. Pearl oysters are easy to grow, take up little room, and will happily flourish in a plastic container filled with ever-useful coffee grounds.

Unlike some of the edible mushrooms on our list, pearl oysters are also relatively quick to grow and fruit. In fact, small mushrooms will start to appear within a few weeks of inoculation. For continuous production, simply refresh the coffee grounds once mushroom production starts to slow noticeably.

This is a distinctive mushroom that almost impossibly balances a tiny cap on a long, thin stem. Enokis are one of the easiest edible mushrooms to grow at home. They also taste great as part of a home grown salad or in a hearty soup.

Enokis are available as spawn or as a mushroom kit, and come in the form of an inoculated sawdust block. They’re happiest in dry climates, and are a reliable, heavy-cropping mushroom. One kit can provide you with a monthly harvest of about 2lbs of mushrooms throughout the growing season.

Native to both Japan and North America, Maitakes are sometimes known as “Hen of the Woods” because of their roast chicken flavor. They’re not as easy to grow as other some of the other edible mushrooms on our list, and can take up to 2 years to start fruiting. They commonly grow on logs or roots, but will also grow indoors in substrate grow bags.

While maitakes can take a while to fruit, it is worth the time and effort. Because of their rich umami flavor, they’re one of the most valued culinary mushrooms in the world. These mushrooms are also good for your health. Studies suggest that maitake mushrooms can potentially help to lower blood sugar levels, and lower blood pressure.

Lion’s mane is an edible mushroom like its cousin the comb tooth. It will grow both indoors and outdoors, with the right care and attention. While each variety of lion’s mane has its own preferences, they usually grow on hardwoods like oak or maple. They grow best in the cool temperatures of spring or fall, and fruiting usually occurs when temperature is between 55-65°F.

Unlike other edible mushrooms on our list, lion’s mane will only fruit once a year. After it fruits, the mushroom can be cut when it’s half developed. This will allow for a second regeneration within about a week.

These mushrooms are popular in China and Japan, and taste like crabmeat. They’re also a prized medicinal mushroom. Studies have shown them to have powerful, possibly regenerative effects on brain cells. Like other types of mushroom, they can also lower blood glucose levels and contain anti-cancer compounds.

Also known as “Garden Giant” or “King Stropharia” this edible mushroom is popular with no-till gardeners. You can spread wine cap spawn in the spring months over mulched areas, such as around shrubs and trees. This allows for continuous harvesting throughout the summer months. Growing mushrooms on mulch between other plants and crops can also help to increase yields. Consequently, the wine cap mushroom is considered to be a great intercrop and companion plant.

The elegant, maroon, wine-colored cap makes it easy to identify and pick out against dull-hued mulch. It also has an excellent, reliable flavor that tastes like a combination of portobello mushrooms, white potatoes, and red wine.

Chanterelles are small- to medium-sized edible mushrooms. This smooth, gold-orange colored variety is pale white internally when snapped in half. These edible mushrooms have a fruity aroma and an earthy, woody flavor with hints of pepper. They’re prized for their velvety consistency and spectacular flavor.

The ideal time to start chanterelles is in the fall, but you can grow them all year round, either indoors or outdoors, with the correct management.

All the edible mushrooms on our list are easy to grow. This means that with just a little time and effort, you’ll be enjoying a crop of flavor-filled, nutritious fungi. As you begin to further explore the wonderful world of mushroom growing, you’ll find that there are many other attractive varieties to grow and enjoy.