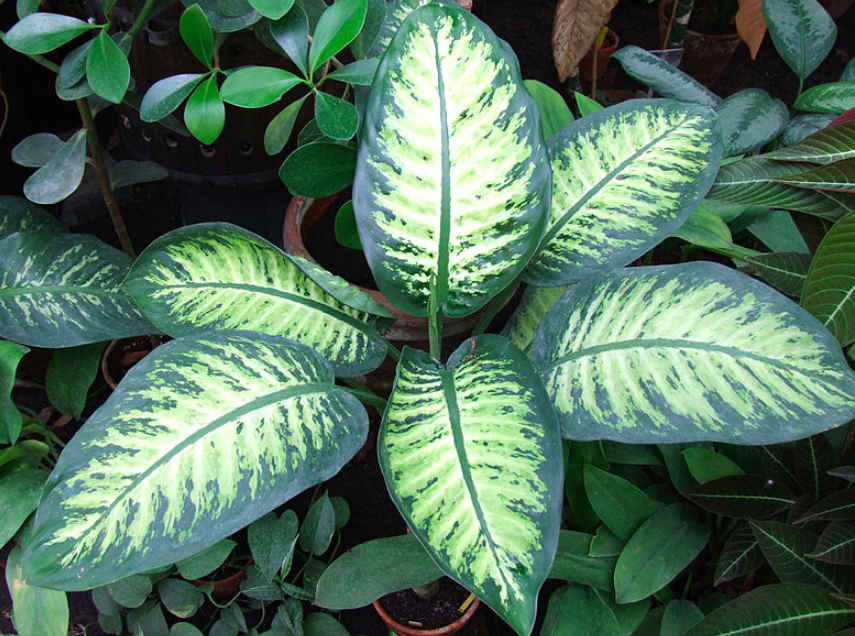 Also known as “Dumbcane”, Dieffenbachia plants are primarily perennial, ornamental foliage species originating from the New World Tropics of Mexico, the West Indies and Argentina. If you love these stunning plants and would like to learn proper Dieffenbachia care, read on!

All You Need to Know About Dieffenbachia Care

These plants are lush and upright in form. They generally feature thick, straight stems and simple, ovate pointed, deep-green and cream variegated fleshy leaves.  Certain Dieffenbachia species are widely cultivated for the ornamental houseplant market and have become naturalized on a fine sprinkle of Caribbean islands, including Puerto Rico.

For many years now, our love of foliage houseplants has been on the rise. We are a plant-loving population and fully appreciate the proven health benefits of plant companions. Sharing our homes with exotic plants is immensely soothing to our overall wellbeing.

In certain cases, foliage houseplants have taken precedence over popular flowering ones. As an example, think of the Monstera delicosa (Cheese Plant), Alocassia macrorrhizos (Giant Taro Plant) and the wide range of splendid species of Ficus – the trusty Fig family.

In the case of the Dieffenbachia genus, you have spectacular year-round variegated foliage. Secondly, you may see stunning singular spadex flowers. The flowers are produced atop slender stems, each cloaked in a pea-green sheath.

You’ll notice these naturally delicate, unpretentious blooms look remarkably similar to that of the Spathiphyllum or “Peace Lily”, as it’s known. Both are borne under the same “Araceae” plant family, which sort of explains their similarities.

Many Species to Choose From

In total, there are 56 species of flowering Dieffenbachia, all originating from tropical America and bearing different variegated leaf markings. They’re naturally quite shade loving as their position in the forest is an under-story plant. Some of the most striking examples I shall share with you today, but take a look for yourself at the diverse variegated range of plants available.

Plus, we shall learn something of their origin and history. Then we’ll delve into Dieffenbachia care for these spectacular tropical shrubs. We’ll also touch upon the subject of very easy propagation.

Firstly, let’s delve into the tropics of New Mexico and learn about their natural growing habitat.

Origin and History of the Dieffenbachia Plants

Native to the tropical forests of America, the Dieffenbachia genus was named by Heinrich William Scott during the 1830’s. Scott was Director of the Royal Palace Botanical Gardens of Vienna. Between 1817 to 1835, Scott and his faithful head gardener, Herr Joseph Dieffenbach, participated in many plant-finding expeditions to South America and Brazil.

There, they collected many foreign plants and brought them back to Austria. It’s said the “Dieffenbachia seguine” species was one of these plants. Heinrich Scott paid homage to his colleague and friend by naming the genus after him.

The species “Dieffenbach seguine” is a robust and sturdy specimen plant. In the wild, its thick stems easily reach 2 to 3 meters in height. Additionally, its paddle-shaped, glossy deep-green leaves have a broad, creamy white variegated midrib and extensive cream veining.

The leaves themselves can grow up to 40 cm long and are produced at opposites up the entire plant trunk. A glorious tropical specimen plant that understandably grabbed the botanical explorers’ attention.

In the late 1990’s, a nature mission based in Costa Rica’s tropical forests showed that one particular species of frog—the Oophaga pumilio—laid almost 90% of her eggs on the leaves and leaf axis of plants in the Dieffenbachia genus.

The forests quickly became a well-known breeding ground for these frogs, also known as the “Strawberry Poison Frog”. Unfortunately, however, within ten years both plant and vertebrate numbers were severely diminished. This was due to the influx of a herd of small, native pig-like animals, called Pecari tajucu, or “Musk Hogs”.

These “Musk Hogs” took a liking to the plants’ tasty foliage and quite probably ingested millions of the Oophaga spawn.

Following on quite nicely from my interesting fact above, the Pecari herd were obviously not subjected to the ill-effects associated from eating the leaves of these impressive tropical shrubs.

Cells within the leaves of Dieffenbachia plants contain toxic calcium oxalate crystals called raphides. These raphides are released once the leaves are chewed. When ingested by humans, they cause throat swelling and leave the victim unable to speak, hence the name “Dumb Cane”. In Amazonia, this toxic sap was often used to make poison arrows.

The ill-effects are not life-threatening and wear off after a time, but it sounds rather unpleasant to me! When it comes to Dieffenbachia care, keep plants away from little fingers and remember to always wear gloves when tending them.

Now for my favourite part… My Top 10 Dieffenbachia Species

This is one of the largest species of Dieffenbachia. Its leaves reach up to 18 inches long, and the plant has an overall height of up to 5 feet tall x 48 inches in width. A most striking specimen plant with glossy, paddle-shaped, deep-green leaves with cream stripes following the leaf veins. “Tropic Snow” has won the Royal Horticultural Society’s Award for Garden Merit.

One of the more compact species, growing to a height of around 0.8 meters x 0.5 meters wide. Its leaves have much greater variegation, often taking up most of the leaf. They feature a slender central grass-green mid-rib and irregular green outer leaf margins. Overall, “Camille” is highly collectable and another cultivar gaining the R.H.S. Award for Garden Merit.

The “Picta” cultivars are some of the most popular in all the species.  Their leaves reach about 10 inches long and range from nearly all green to practically all-cream. Leaves of this “Exotica” variety have heavily splashed ivory variegation that contrasts boldly against the remaining deep-green leaves. You can expect an overall plant height of between 24 to 36 inches.

The all-green Dieffenbachias are rather hard to find. Two of the best are this “oerstedii” and Deiffenbachia humilis.  These grow to top height of a round 5 feet.

The large. striking leaves of this slower-growing “Sterling” cultivar look as they have been painstakingly painted. They’re fleshy and dark green with a pure white central midrib and delicate white veining. Reaching a height of around 36 inches, this cultivar makes a dramatic centerpiece.

Natively, Dieffenbachias are used to growing on the forest floor, in well-drained, humus rich, fibrous soil.  To emulate this type of growing medium we need a very loose and well-draining loam based potting mix that can be kept consistently damp but not soggy.  Re-pot your plants every Spring to refresh the compost mix, gradually enlarging your pot sizes.  Mature specimens, however, can be re-potted every couple of years.

Bright, indirect or filtered sunlight is perfect for proper Dieffenbachia care, preferably within 1.5 to 2.5 meters of a draft-free window. That said, however, many species will tolerate lower light levels.

Dieffenbachias need a warm and draught-free environment to grow happily.  Try to keep a moderate temperature of around 18 – 29 degrees C, that’s 65 – 85 degrees F.  They will not appreciate any temperatures below 15 degrees C.

Humidity is another essential fact to consider when growing these tropical foliage specimens. Dieffenbachias would naturally grow in a high humidity environment, one which we can easily emulate by standing our potted plants on trays of damp pebbles and regularly misting with a fine-water sprayer.

Caring for your Dieffenbachia

Water your Dieffenbachias moderately, each time allowing the entire potting mix to become moist, but not soggy.  Allow the top centimeter of the potting mix to dry out, before repeating the process.
Never let your plants sit in excess water, and lighten up on the watering during cooler periods.

Throughout the growing season, I recommend using a well-diluted, balanced liquid feed once every couple of weeks.  You will not need to feed your Dieffenbachias in the winter time.

There’s no real need to prune, but do remove any old or damaged leaves from your plants. Remember to wear gloves for this task to avoid any accidents.

There are several ways to successfully propagate from your Dieffenbachia plants, and the easiest is by taking stem cuttings. Root in these cuttings in clean, warm water or in a fibrous growing medium, such as sphagnum moss.  Below is a quick “how-to” guide for water-rooted stem cuttings.

How to Root Stem Cuttings in Water

An alternative propagation method is by air-layering.

Dieffenbachia Care for Pests and Diseases

Plant Pests to Watch Out For

Two of the worst offenders when it comes to Dieffenbachias are scale and aphids.

Both are common houseplant pests and thrive in a warm environment. Remove these by hand using either a soapy spray or a cotton wool swab dipped in alcohol. Alternatively, use a houseplant pesticide labelled specifically for the pest involved. I like to use the biological controls first, but if all else fails the pesticide should do the trick.

Red spider mites and mealy bugs are other common plant pests which you may have problems with. Spider mites are tiny and rather hard to identify. They damage your plants slowly and subtly until your plant leaves look rather faded and unhealthy.

Mealy bugs are much easier to spot than their smaller friends. They’re like tiny dots of fluffy wool on your plants, commonly located in leaf axis.

Horticultural oil sprays can control these pests. They are pretty low in toxicity and kill the pests by suffocating them. Have a look at your local garden store for suitable spraying oils.  Always remember to remove infested plants from your collection to avoid spreading these pesky pests.

There are a number of fungal diseases which can affect your Dieffenbachia plants, such as fungal leaf spot, rots and blight. It’s much more likely to happen in the wintertime when the weather is cooler and your plant has less resistance. Should you have a problem, spray your plant with a suitable plant fungicide available from your local garden center.

Over-watering and low temperatures seem to be the cause of some the greatest problems with growing Dieffenbachias.  Symptoms include wilting, discoloration, and yellowing of the leaves and limp stems. Always follow the watering guidelines to avoid the disappointment of poorly plants.

Five Favorite Companion Plants for Your Own Tropical Oasis

I have a mad obsession about tropical jungle plants, especially those with large leaves and a certain individuality.  Take a look at some of the more discerning choices out there, such as the Chinese Money Plant “Pilea peperomiodes”, the Golden Pothos plant “Epipremnum aureum” and my favorite of the moment in the Giant Taro family, “Alocassia “Black Velvet” which as you can see below is a real beauty.

As you can see, Dieffenbachia care isn’t particularly difficult. With minimal effort, you too can cultivate these magnificent plants in your own home.