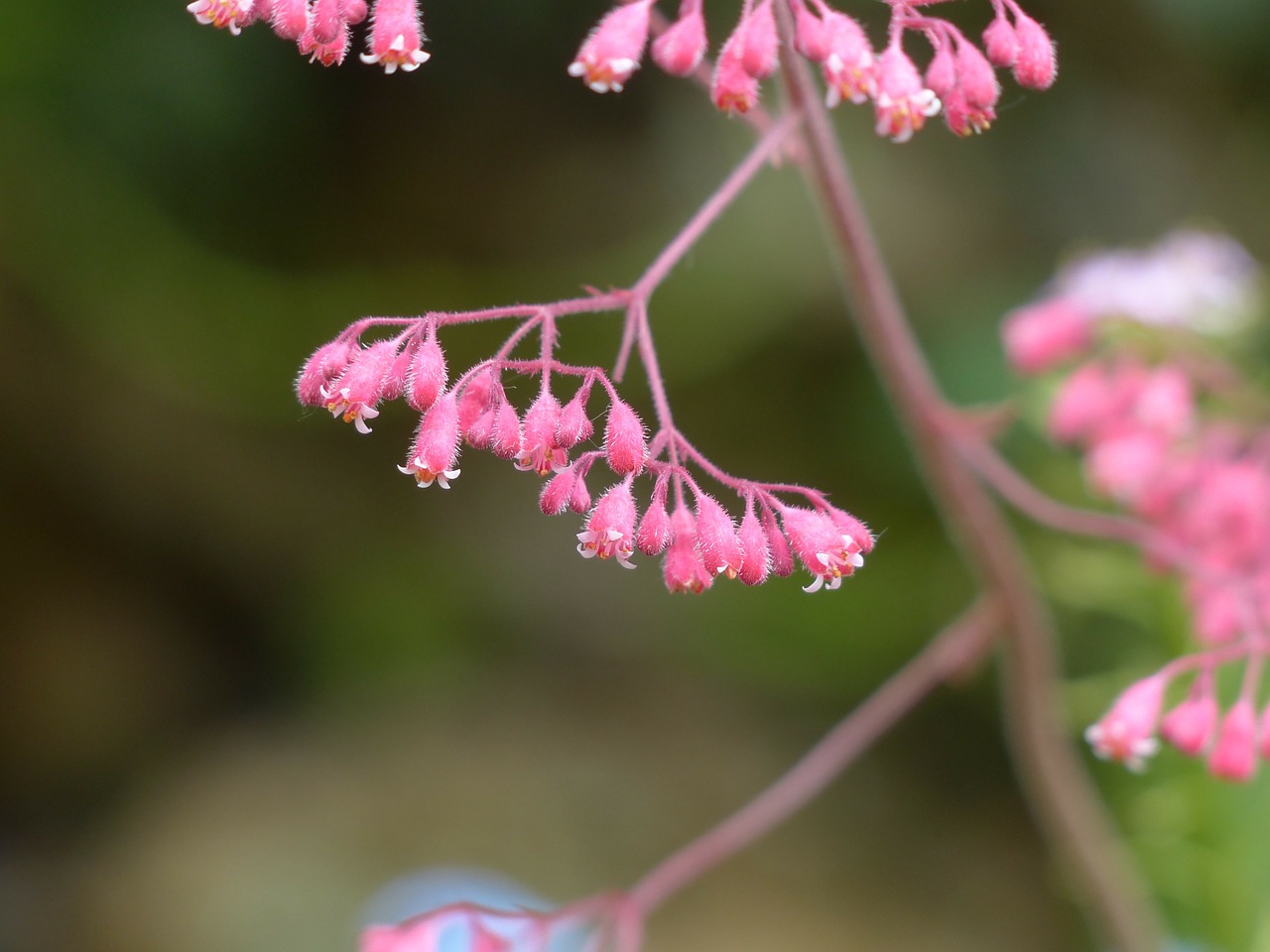 Coral bells plants (Heuchera) are striking evergreen/semi-evergreen, herbaceous perennials native to North America. These unique, palmate-lobed, low-growing perennials are highly valued foliage plants. They belong to the Saxifragaceae plant family, which itself has around 37 available species. Read on to learn how to grow your own!

All About Coral Bells

Most plants now sold for garden use are the intensively developed hybrid varieties of the Heuchera americana.  However, the original “Purple Palace” seedling was first discovered in a seed batch at the Kew Palace, Royal Botanical Gardens in the United Kingdom.

Their mound-forming, rosettes of large leaves come in a variety of colors, shapes, sizes and textures. All produce tall and delicate flower racemes from the early summer months onwards. Before development of these new hybrid varieties, the original heritage Coral bells plants were the lone species, Heuchera sanguinea.

Over the past twenty years or so, horticulturalists have extended the Heuchera genus and succeeded in bringing us stronger and prettier plants. These include the popular, direct crosses between Heuchera and its closely related Tiarella species.

This selection of plants are known as “X Heucherella” and give the garden enthusiast a much wider range of leaf shapes, textures and colors.  Moreover, these hybrid varieties also have an extended period of garden interest.  As gardeners, this is heaven to our ears!

So, what makes this compact plant family so appealing? Let’s take a look at how these easy-care perennials make perfect ground cover plants for almost any space.

Origin of the Heuchera Plant Genus

The Heuchera plant genus was named after Professor Johann Heinrich von Heucher in 1738. He was an 18th Century German physician and university professor, and a good friend of the botanical master Carl Linnaeus. Linnaeus named many plants after his friends and colleagues, many of whom had a great interest in plants and botanical nomenclature.

Heuchera are typically shade-loving plants native and commonly found growing in a diverse range of habitats. For example, “Heuchera maxima” can be found growing on the Channel Islands of California. Not only do these “maxima” species withstand the windswept, rocky ocean shores, they also tolerate the high salt content in both the air and soil.

Meanwhile, species such as “Heuchera sanguinea” are more suited to the warm climates and arid landscapes of New Mexico and Arizona.

To give a general round-up of some of the most common Heuchera species, take a look below at their characteristics and origins.

A seriously drought- and heat-tolerant species with brilliant, bright blooms, native to the Southwest. Great for a partially shaded site with bold and variegated leaf varieties. Take a look at the fragrant, red-flowered “Firefly”, the cream and green mottled foliage of “Snow Angel” , plus the sought-after, deep coral-red blooms of “Coral Forest”.

This species has a very tidy and compact form, preferring partially-shaded woodland sites with a rich and nutritious soil. Very tolerant of temperature extremes and humidity with a good selection of leaf variegation. Native to eastern and central regions of North America, this American Heuchera generally has highly silvered leaves.

This plant group is native to the more Southern regions of America and tend to be larger in size than their relatives.  Their leaves have a fuzzy velvety feel and appearance, while the form of “H. villosa” plants have a more open crown than other Heuchera species.

The “Cylindrica” species is less showy than its counter-parts, but grows shorter, stronger flower spikes. This results in better resistance to windswept coastal sites. Its trademark mat-forming foliage has wavy leaf margins and flower spikes in a more limited, but beautifully muted color range.

Leaves of the “Micrantha” species have a wavy, ruffled appearance and are coated in small velvety hairs. Consequently, this species is often used for hybrid varieties with these leaf characteristics. Its native to the American West Coast, with root systems tending to be more tolerant of wetter, heavier growing soils.

That said, however, they’re generally found growing on rocky slopes and cliff faces. Their flower inflorescence can reach up to a meter in height, each bearing tiny rounded flowers. “Palace Purple” is the most recognized variety in this species. Its large, shiny, star-shaped purple-black leaves are widely planted in gardens around the globe.

As you can see, there are many species and cultivars to choose from. Below I’ve listed my 5 personal favorites for striking colored foliage and delicate flower interest.

This excellent lime-green Heuchera has a vigorous growth habit and deeply lobed, shiny leaves—each with a ruffled leaf margin. These like shady sites, bringing a zesty splash of color to any dull corner of the garden. I particularly like under-planting larger shrubs and trees with these bold Heuchera varieties.

They can cover a large amount of ground space relatively quickly, producing dainty flower spikes from early summer time right through until September. Growing height of 30 cm, with a spread of up to 45 cm.

As the name suggests, this variety bears some of the reddest foliage of all coral bells plants. Its large, glossy, lobed leaves retain this rosy color throughout the spring, summer and autumn months.  From early summer, neat flower spikes produce dainty white bell-shaped flowers, free-flowering until late Autumn.

“Fire Alarm” is a lovely, compact variety growing to around 25 cm in height, with a spread of up to 35 cm. As a gardener’s tip, these look great teamed with acid yellow perennials and Acer palmatum “Sango-kaku”.  A striking color contrast, I’m sure you’ll agree!

This direct hybrid cross between Heuchera and Tiarella has the most amazing color combination. Its slightly angular, lobed leaves are a bright golden yellow with a central splash of deep red. Though slightly smaller in size than my other favorites, only reaching a height of 20 cm, this gold and red variety is not to be overlooked.

Another hybrid variety, well-recognized and awarded the prestigious R.H.S. Award of Garden Merit. “Kimono” is another striking example of breeding brilliance. It bears angular, deeply cut, mint-green foliage with a metallic silver hue.

Deep purple veined markings run through the center of each leaf, turning copper-rose in color in the winter months. Slender flower spikes produce tiny white, bell-shaped, dangling blooms from spring through till late autumn time. All in all, a highly attractive, low-growing foliage plant with a height and spread reaching around 25 cm x 40 cm.  Very well-suited to any partial-to-fully shaded site with well-draining soil.

Now that we’ve touched upon some of the best examples of the coral bells plant, let’s see just how easy maintenance they are.

All Heuchera require well-draining soil.  Heavy, clay soils can be the number one reason why your Heuchera plants do not grow to their full potential. With this in mind, it is worth taking your time to ensure your soil is suitable for planting.

If you have heavy soils, dig over an area and incorporate any soil conditioners or organic matter into the existing soil to aid in changing its texture. Alternatively, Heucheras make good container plants when planted in well-draining quality garden compost.

The Perfect Site for your Heuchera

Coral bells prefer soils with a neutral to slightly acidic pH value, though most aren’t too fussy so long as your soil drains well. Most perform best in a partially shaded site, however, also many grow well in part sun with filtered shade. Try to choose a site that’s shaded from the sun’s rays during the hottest part of the day, as intense sunlight will cause your plants to wilt and scorch.

This is one of many plant groups that work best when planted in groups. I tend to plant mine in groups of three, five or seven, depending on the space I have. Try to plant with at least 24 inches from center to center of each plant.

Once planted, water your Coral Bells plants well and let them dry out between watering.  Most varieties are drought and heat tolerant once established, which only takes around 6 months once planted.

There is no real need to use excessive feeds and fertilizers for your Heuchera plants— they seem to prefer a good growing soil and regular mulching.

Heucheras  are easy to maintain, only needing a quick prune and spring tidy up. If they start to outgrow their space, give them a little trim to keep them compact.

As your Heuchera plants age, they have a tendency to raise out of the soil slightly. This is a good time to lift your plants and divide them. Division is the simplest way of propagating your mature plants, and the most effective. Use a sharp shovel in early spring and place the divisions in enriched, nutritious soil up to the crown.  Once planted, water in well.

The two main culprits are rust and vine weevils.

Rust is identified by small raised, rust colored patches on the undersides of the leaves and caused by the fungus Puccina heucherae. It’s spread by airborne spores and tends to be a real problem during wet, warm summer months.

There are good chemical controls specifically for the control of rust diseases on ornamental plants, these include Provanto Fungus Fighter and Scotts Fungus Clear Ultra. On the other hand, good plant hygiene, correct plant spacing and an early morning watering regime can help to decrease the chance of all fungus diseases.

Vine Weevils can cause real problems.  Usually by the time you’ve noticed a problem, the weevils have usually already caused major damage to the plant’s root systems. The adult weevils munch on your plant foliage at night, whilst the grubs and larvae live in the soil, attacking the roots.

Biological controls include introducing the microscopic nematode insect to your affected planting area, where they feed on the weevil larvae. Alternatively, there are effective systemic pesticide controls which can give protection against infestation and drench the soil or compost.

Perfect Companion Plants for your Heuchera

Other shade-loving perennials such as Hostas, Bergenias, Pulmonaria and Hellebores are perfect companion plants for Heucheras. Try out different color combinations by mixing bright greens with deep reds and purple colors. Remember to plant a diverse selection of foliage shapes, sizes and textures for maximum impact.