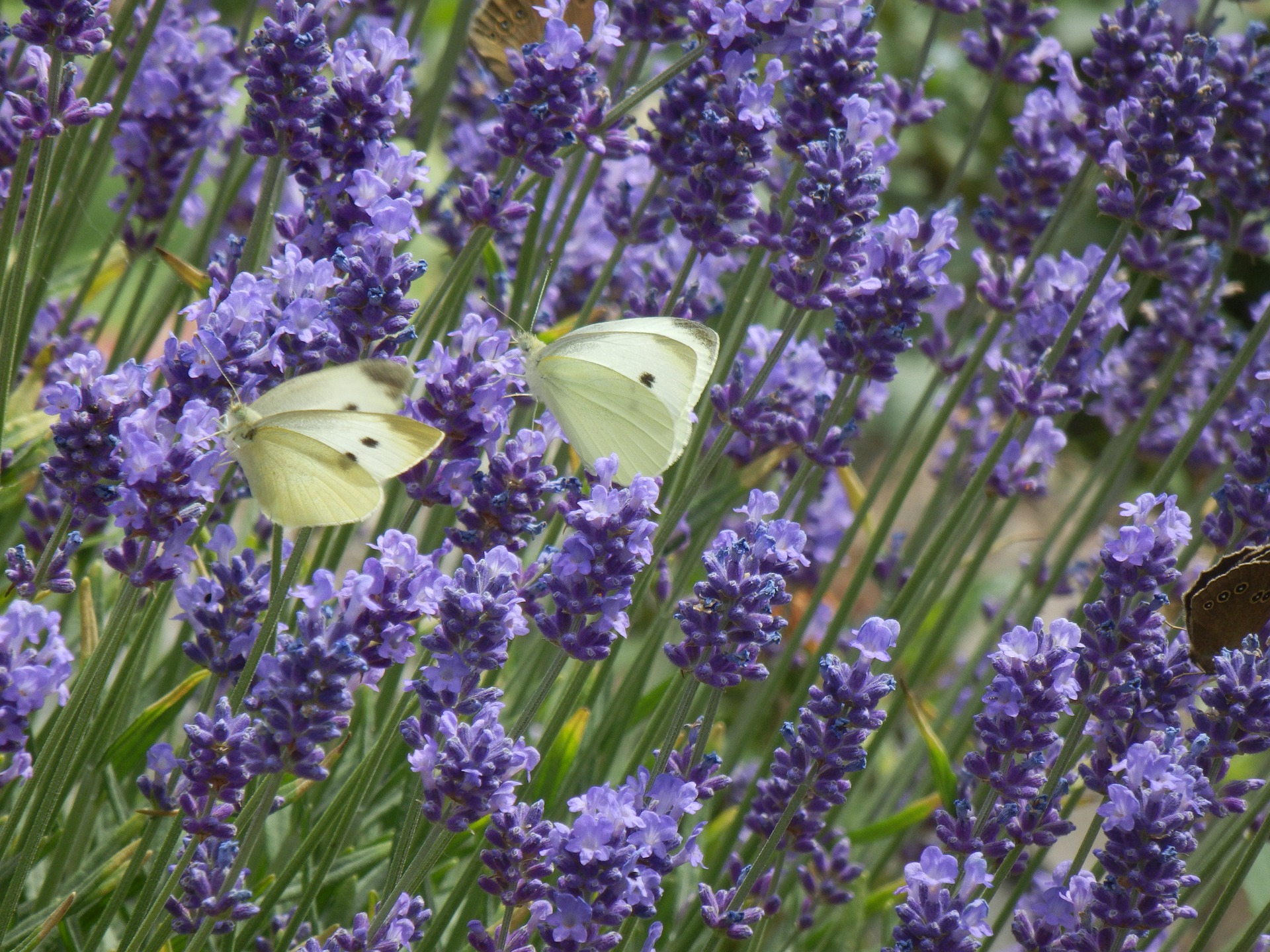 Broccoli, cabbage, kale, and bok choy are delicious additions to any garden. Growing brassicas can be a frustrating process, however, since they attract a lot of pests. All brassicas attract everything from slugs to caterpillars, including the heinous cabbage white butterfly.

These jerks are the biggest culprits throughout North America. Aptly named, this pretty butterfly starts out life as a cabbage-devouring caterpillar. The small, green and black caterpillar is hard to see in amongst your brassicas. It blends right into cabbage and kale leaves as it munches away at them.

If you’ve ever brought in a handful of kale, only to find a few wriggling caterpillars eating your leaves, you’ve dealt with this greedy bug.

As beautiful as the butterfly is, your brassicas weren’t planted to feed its caterpillar incarnation. This endless eating has to stop, and nothing stops caterpillars better than Guinea fowl.

Guineas look decidedly otherworldly with their naked heads, wide bodies, and unearthly cries. They look like fat raptors, or inquisitive aliens as the wander the yard.

These birds are wilder than chickens—more like pheasants than pastoral farmyard poultry. But they are domesticated, and with a little training, they’ll form an efficient, bug-eating army. In fact, Guineas are five times as efficient as chickens when it comes to garden pest control. They’re single-minded hunters, and they love the taste of caterpillars.

These eerily alien birds stalk their prey through the garden. Unlike chickens, they’re not dedicated scratchers, so they won’t destroy your arugula and broccoli raab beds. Guineas will scratch, especially at newly worked soil, but they’re less persistent. They prefer to startle their prey, then snatch it in their sharp beaks.

So if you’ve fought of invasion after invasion of cabbage white butterfly caterpillars (or other nasty bugs), read on for tips on keeping a troop of Guinea fowl for combating these persistent pests!

Getting Started with Guinea Fowl

If it’s midsummer, and you’ve got caterpillars over your head, buying Guinea keets (chicks) isn’t going to do you any good. But local farmers, homesteaders, or other rural friends may have a few, grown Guineas for sale. Check the classifieds, Craigslist, or ask around at the local feed store.

Avoid buying just one Guinea. Like all barnyard birds, these animals are social: they need a flock around them to bond to and feel safe with. One sad, lonely Guinea won’t be much good to you. It’ll likely spend its days moping and calling out for friends. Find a flock of at least 3 birds, however, and you’ll be set for the summer.

When you bring your Guineas home, lock them up in their coop for at least four weeks. These birds take a long time to settle in. If you set them loose in your garden, all your new birds will wander off before nightfall.

It’s a great Idea to pluck a few caterpillars off your brassicas and toss them to the birds. Your new flock will devour the caterpillars, and long for more!

After living in the coop for 4-6 weeks, your birds will be ready to spend their days out in the garden. I like to start by letting them out in the mid afternoon. That way, the freedom doesn’t go to their heads all at once. I also initially leave one or two of the Guineas in the coop while the others are out. These birds are passionately attached to each other, so they won’t run off without the whole flock together.

During the first week or two out in the garden, let out only half your flock. The birds will happily munch up all the caterpillars they can find, and they’ll stick around. Then, let out 3/4 of the flock. After 3-4 weeks of partial freedom, you can let the whole flock out together .

Guinea keets are a funny sight. If you’re planning ahead for another summer-long caterpillar war, order 3-6 keets and raise them yourself. The process is identical to raising chicks. In fact, you can order and raise the two families of the Galliformes species together. Furthermore, raising them alongside chickens will make the former much tamer.

Keep your keets indoors, under a heat lamp, until they’ve feathered out enough to move to the coop. You don’t have to worry as much about them running off, but only let out half the flock for the first few weeks anyway.

It’s better to be safe than watch your whole flock fly away on their first day of freedom. House them with your chickens, or—if you’d rather keep them inside the garden, and the chickens outside the garden—build a small coop just for them.

Guineas get most of their nutritional needs met in the garden. Not only cabbage white butterfly caterpillars, but ticks, grasshoppers, even snakes fill their plump bellies. Still, encourage them to return to the coop by feeding them a small amount of grain in the evening.

Mixed grains, like wheat berries, oats, peas, and a bit of corn are popular. You can give your birds homemade or organic chicken feed, but avoid conventional layer pellets. The medicines and supplements in conventional feed can make your Guineas sick.

They’re hardy birds when it comes to shelter. If they had their way, Guineas would be roosting in trees. But that can be a problem if you have foxes, owls, coyotes, or other predators around. It’s best to build a small shed for your birds to keep them safe.

Mine are happiest in a three-sided shelter with a chicken-wire door on the fourth side. With a roosting pole at the back end, the Guineas are safe and cozy at night. In the morning, I open the door and out they come to raid the garden again.

When let out for most of the day, your Guineas will decimate the cabbage white butterfly caterpillar population within weeks. They’re active foragers with a keen eye for any small movement. Try confining them to your brassica beds for a few days and you’ll be shocked at the results.

I like to house mine inside the garden itself. I cover freshly sown beds with chicken wire to deter scratching, and let them wander at will around the rest of the garden.

Avoid giving your Guinea fowl any garden treats. Save the scraps for the chickens, and treat your flock to cut worms, caterpillars, hornworms, and other little vandals. This keeps them hungry for the invaders instead of the vegetables.

Cabbage white butterflies produce two generations of devouring caterpillars each year—sometimes even three. It’s important to have a dedicated extermination team on the watch if you want to stop the invasion at each hatching.

Guineas are nothing if not dedicated. If you get them started before the first generation of white butterfly caterpillars has time to feed, you might just be able to stop the whole cycle!

Imagine a summer and fall of gorgeous cabbages, without any slimy holes in them. Imagine healthy broccoli, abundant Brussels sprouts, and leafy kale. That’s the harvest your flock of guineas will protect.

These fowl aren’t perfect. They’re fantastic for pest control, but they are loud. So very loud. Guinea cocks (males) make a chi-chi-chi chatter off and on all day. Guinea hens (female) have ‘comeback, comeback, comeback’ call that some describe as soothing. Others think they sound desperate and sad. Either way, they aren’t subtle birds.

They’re raucous, wild, and pretty ridiculous at times. These birds won’t nestle under your arm like your favorite hens. Instead, they’ll run around your garden snatching up bugs and squawking at everything that catches their eyes.

Guineas are also roamers. If they can wander, they will, and they don’t care about property lines. Once they’ve established themselves in a coop, they will want to return at night, but by day, they’ll wander the neighborhood.

If you live in the suburbs, or in a small town, be sure to talk to your neighbors about Guineas before investing.

Are They Worth It?

After all this, you might be wondering if a can of insecticide might be a better option. It isn’t. Believe me, pesticides are no match for Guineas in the garden, and these birds won’t poison your food.

If you have the space for poultry, and you don’t mind the chatter, they’re are a garden-saver. Especially if you’re in the middle of a turf war with white butterflies and their young. All it takes is a year of Guineas to upset the life cycle and reduce the damage.

At the end of the year, you can butcher your birds and roast them up with Brussels sprouts and garlic. These fowl have rich, nuanced flavor—closer to pheasant than chicken. You’ll thus be doubly grateful to your birds for their contributions.