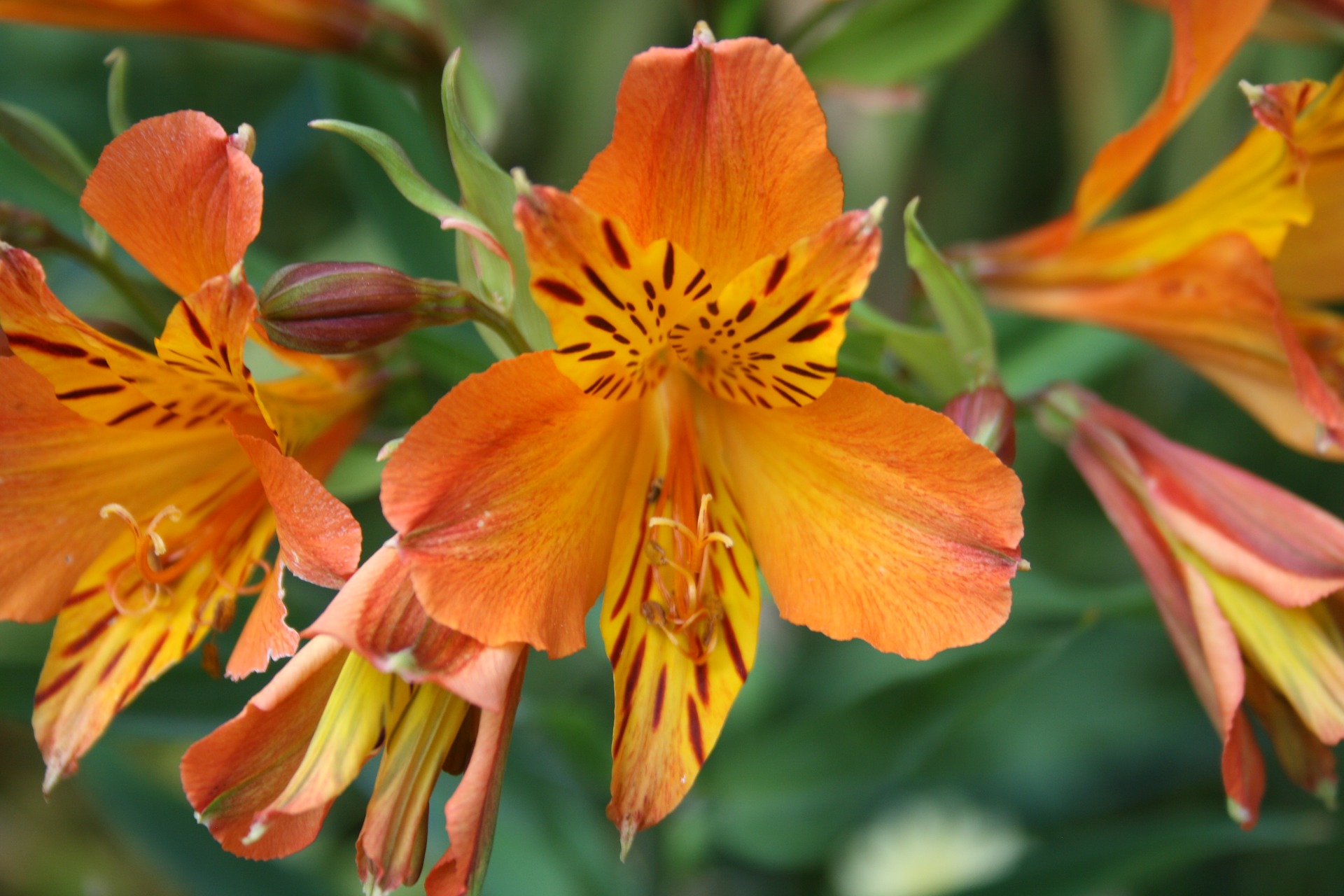 If you’re gardening primarily for cut flowers, this one’s for you! The Alstroemeria plant, otherwise known as the Peruvian lily, is a must-have for anyone who loves to fill their home with fresh blooms.

These blooms are smaller in size and stature than a true lily, but by no means less striking. In fact, this is highly regarded as one of the most free-flowering perennials around. Would you believe it has an impressive vase life of over two weeks? The Alstroemeria is a true performer in both flower beds and containers, with an upright, compact habit.

Its flowers are tubular-shaped blooms, mainly bold in hue with darker markings. These flowering perennials are rarely solitary, more commonly borne in umbels on thick and sturdy stems. Blooms start in early summer and continue right through to the first frosts of Autumn.

Let’s take a look at the history of these Peruvian lilies, why they’re so sought after, and how to care for them.

This colorful plant genus is native to South America and mainly inhabits the Andes’ cool and mountainous regions.  However, some species have become naturalized throughout other regions of the United States. They’re also found in Mexico, Australia, New Zealand, Madeira and the Canary Islands.

There are officially two different types of Alstroemeria; with almost all species restricted to two distinct centers of origin and diversity. One of these is central Chile and the other is eastern Brazil. Species from Chile grow through the winter months, while those from Brazil are summer growing perennials.

The expansion of cultivars has only occurred in the past 40 or so years. This has been a direct result of breeding programs originally sited in America throughout the 1980’s. Since these trials, some nearly 200 hybrid cultivars are available to the avid gardener. In fact, they’re mainly a direct cross between the Chile and Brazilian species.

These vibrant flowering perennial hybrids have evolved over time to become mainly evergreen plants. Unlike their original parent species, more recent cultivars are also capable of producing flowers pretty much all year round.
Good news for all you budding florists!

Incidentally, the genus was named after the Swedish botanist Klas von Alstroemer (1736 – 1794). Furthermore, the name was given by his friend and tutor Carl Linnaeus, the great Swedish botanical classifier.

Alstroemeria’s lily-like blooms cover most of the color spectrum. In fact, you’ll see blooms ranging from pink and yellow to cream and red, purple, orange and green. Apart from their main flower hue, much of this flower’s appeal lies on the flowers’ interesting markings. These are usually a combination of flecks, stripes and streaks.

Hybrid cultivars have larger, pendulous, tubular flower heads, each reaching up to 12 cm. This makes them utterly unique, and very popular in floral arrangements.

There are 16 hybrid Alstroemeria cultivars that have earned the prestigious RHS Garden Merit Award. These are thick-stemmed varieties that are suitable for outdoor planting in zones 7–11. Most cultivars bloom from late spring to early summertime. Additionally, their rhizomatous root systems are frost hardy to around 23F/-5C.

Let’s take a look at my best 10 Alstroemeria cultivars, all of which are RHS awarded.

A clump-forming cultivar with mid-green, narrow linear leaves and tall, erect stems. It produces terminal clusters of pure-white tubular flowers with dark stripes and yellow blotches from June to November. “Apollo” is a very popular Alstromeria variety with a solid growth habit and a mature height of around a meter.

The “Cahors” cultivar will grow to 90 cm, and produces clusters of showy rose-pink and red blooms. Each inner petal is yellow with deep red streaked markings.

This robust herbaceous perennial has will reach an impressive 1.4 meters in height. Its flowers are salmon-pink in hue, each with a brown-streaked, yellow flare on the upper petals.

This semi-dwarfing variety only grows to 45 cm, with a narrow, compact habit. Its funnel-shaped, salmon-pink have pink tips and brown streaks.

A renowned sturdy cultivar that will reach a mature height of around 1.4 meters. “Orange Glory” has light green foliage, topped with terminal umbels of large, red-tipped, orange blooms. Inner floral segments are mainly deep yellow in color with orange tips.

Here we have a unique lilac-blue variety. Additionally, this is a highly regarded member of the perennial family.  “Perfect Blue” reaches a whopping 1.4 meters high. It has large, violet-blue, long-stemmed flowers and glaucous grey-green linear foliage. Its outer petals have a dark purple flush, while inner are yellow-white, flecked with brown dots and stripes.

This is a lovely, golden-orange Alstroemeria cultivar. It’s tall and clump-forming, and reaches about 1.2 meters in height. It bears large golden funnel-shaped blooms are from late spring, and each flower has deep red-brown petal tips and red-purple streaks.

This beautiful cultivar is very sunny with a bushy, spreading habit.  It has typical deep-green leaves and reaches about a meter in height. The flowers are a striking mix of yellow and purple with striking burgundy markings. In contrast, the outer petals are a lemony yellow, with a mauve hue. Each outer petal also has a small deep purple blotch.

Alstroemerias grow from rhizomes. These produce fibrous roots which thicken over time, becoming storage organs as the plant develops. This is sometimes mistaken as a tuberous root system, which is essentially a storage organ.

Each cultivar responds differently, depending on where they’re grown. As a general rule, however, Alstroemeria plants grow best in a full-sun to partially shaded position. Additionally, make sure they have sufficient shelter from strong winds and inclement weather.

Be sure to add a good layer of mulch to the soil’s surface. This will protect your plants against harsh, direct sunlight.  Aim for a location that incorporates morning sunlight and afternoon shade.

Grow your Alstroemeria in pH neutral to slightly acidic, well-draining soils. These are heavy feeders, so incorporate some rich organic matter in with your soil when you plant. They don’t like to be moved around, so plan the site well in advance.

Alstroemeria heights vary from 15 cm – 1.4 meters tall, depending on cultivar, situation and light intensity.  Plants grown in full sun do tend to have shorter flower stems than those grown in semi-shade, this is partly due to their search for light.

Cultivars can vary, but Alstroemerias range from frost-tender to fully frost-hardy plants. Many cultivars are suitable for planting outdoors in zones 7 – 11.

Alstroemerias are great for container planting, even if you live in a less-than-ideal temperate zone. Start tender  in the glasshouse, then move them outdoors throughout the summer months. Return them inside come winter time to keep them safe from the cold. Use a fine compost with additional grit, and re-pot your plants every other year.

You’ll get a high volume of flowers and ever-blooming growth habit throughout the whole season.

Buy young container-grown plants for your garden, as many of the rhizomes available for sale are quite unreliable. The best time to plant is spring or early autumn.

Caring for your Alstroemeria Plants

Water your Alstroemeria plants regularly until they’re well established. Provide a nice layer of bark mulch on the soil above the plant roots. This will protect them from the hot sun and help with soil moisture retention.

Feed your Alstroemeria plants once a week throughout the growing season. Use a high potash feed, which will replace nutrient losses caused by its heavy feeding. It’ll also increase disease resistance and help in flower production.

For the first flowering season, you will need to deadhead blooms to promote further flowering. After the first season, remove the whole flower spike at ground level once the flowers have faded. This too will promote subsequent flowering.

Smaller Alstroemeria cultivars shouldn’t need supporting, but taller varieties might. Although there are some effective herbaceous supports available, I just use bamboo canes and garden string.

You can avoid most problems by applying a thick 8 “ bark mulch over your plants’ roots for at least their first two winters.

You can propagate plants by dividing their rhizomatous root systems. Do this task around April, taking great care not to damage the delicate root systems. Pot these rhizomes up in a fine, well-draining compost and water regularly.

Take care not to over water your Alstroemeria plants as this can sometimes lead to root or stem rot. The only real pests for outdoor grown plants are slugs and snails. These are particularly drawn to tender spring foliage.