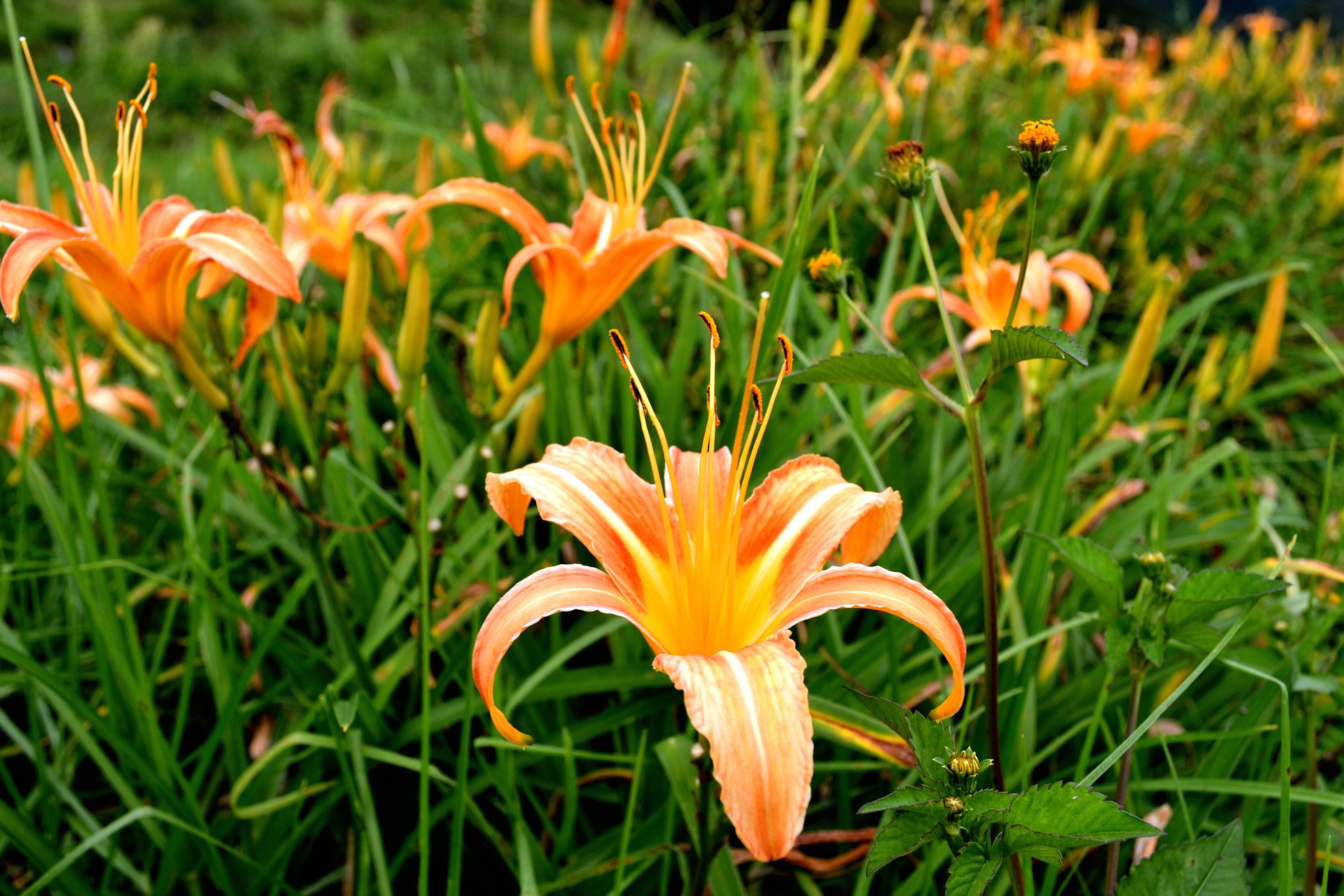 Tiger lilies and day lilies may look similar, but they’re actually completely different species. Understanding which type of lily you’re growing can alter how you plant and care for your blooms. In this article, we’ll go over the difference between these two popular lilies and show you how to care for each.

Tiger lilies (Lilium lancifolium) are gorgeous flowers that are often grouped together with daylilies (Hemerocallis spp.) to create stunning displays. Both offer colorful, showy flowers, but they differ when it comes to the shape and color of the blooms, the growth habits of the plant, and how they’re planted.

Luckily, you can tell the difference just by looking at the plants and studying how they grow.

Tiger lilies are a single species native to eastern Asia. Day lilies, on the other hand, are comprised of various species that are native to Asia as well, but also include hybrids.

Use the following information as a guide to tell the difference between tiger lilies and day lilies. The main two differences—the shape and color of the blooms, and the plant’s overall growth habit—determine how each variety is planted and cared for.

*Note: Many wild food and foraging sites mention how delicious day lilies are. Yes, Hemerocallis fulva’s petals, tubers, and shoots are technically edible. That said, around 1 in 50 people will get violent gastrointestinal issues if they eat them, so be careful.

In contrast, tiger lilies (Lilium lancifolium) are highly toxic. They can cause serious harm to children if ingested, and are deadly to cats and other small animals if ingested.

The bright orange flowers on a true tiger lily point downward and have black dots on their petals. Numerous blooms appear on the stem’s top portion portion at once. These may appear slightly more reddish orange in hue with dark brown spots.

In contrast, day lilies face upward and are shaped more like an open trumpet. Some have flaring or ruffled petals, and they can come in star-shaped, double flowered, or spider-shapes. They also come in a wide variety of colors. They may even come in more than one shade, making them particularly attractive.

The orange lilies you commonly see growing along roadways or in ditches are most likely day lilies. In fact, they’re aptly known as “ditch lilies”, colloquially. These won’t have the spots that give the tiger lily its name, even though many people call them tiger lilies anyway.

A tiger lily grows upright, with an erect stem that can reach between 3 and 5 feet in height. The dark green lanceolate leaves shoot horizontally from the stem. Older plants may contain multiple stems, while younger plants tend to only have a single stem. The roots of the plant are fibrous, and they grow from the underside of a rounded bulb. Each bulb will produce a single stem, and up to 10 blooms can grow in groups around the stamen.

Day lilies grow in a clump, with arching leaves similar to grass from the base of the plant. The foliage may appear dark green or light, and grow anywhere between 18 and 24 inches tall, depending on the type. Most plants have multiple flower stalks that grow from the center of the plant, which can reach around 12 to 36 inches in height.

Additionally, day lilies have a different root system, with more slender roots that are either fibrous or fleshy and tuberous. They grow more slowly, usually in a clump that seems to spread. The flowers may only last for a single day, depending on the variety.

How to Plant Tiger Lilies and Day Lilies

To create new daylilies, divide an existing plant from the clump of roots once it’s stopped flowering for the season (mid to late summer). Cut around the clump using a spade, lifting the plant up to cut it into sections using a knife. Then, replant the smaller sections.

Tiger lilies, on the other hand, produce a small baby bulb in the leaf axil of the plant: where the leaves meet the stalk. You can gently remove these bulbs near the end of the growing season and plant them directly during the fall or spring. The roots will form in the autumn, and you’ll have a new plant the following year.

Both types of lilies grow best in a full sun location, but tiger lilies will tolerate a woodland condition as well. Any type of day lily with dark-colored blooms prefers partial afternoon sun on hot summer days.

A day lily produces fewer blooms when planted in the shade, and a tiger lily in partial shade may also produce fewer flowers. That said, it’ll lean its tall stem toward the the sun to help meet its sunlight needs.

Both lilies require well-draining soil, and tolerate various types of organically rich soil. The plants differ in the soil condition, where a tiger lily always prefers moist soil. Day lilies are more heat- and drought-tolerant, so the soil can dry out between waterings once the plant is well established.

Tiger lilies are perfect for a yard border or along a fence because they grow so tall. Plant them in front of a tall evergreen tree, or simply use them to backdrop shorter flowers.

In contrast, day lilies are commonly planted as ground covers, and are found along roadside ditches, used in garden borders, in rock gardens. There are also dwarf varieties that are perfect for planting in containers.

Because day lilies grow with a clustered root system, make sure to space the plants around 24 to 30 inches apart. For tiger lilies, you can plant 3 bulbs together for a striking display.

Both tiger and day lilies are rewarding for gardeners, because they don’t require much preparation or care.

Both types of lilies are hardy and require an average amount of water (about an inch of water per week) for the best results. You may need to keep a closer eye on tiger lilies when it comes to water needs.

Periods of drought aren’t as good for the tiger lily, whereas day lilies are more tolerant. That said, a mild drought will cause some flower buds to drop in either type. If you keep the soil too moist for day lilies, however, they may begin to rot.

Adding a layer of mulch to your garden in the spring can help any type of lily conserve moisture. Organic mulch provides adequate nutrients during the growing season as well, which makes it a great addition at the start of the season to encourage growth.

Fertilize either type in the spring and again during the summer, when they produce the most blooms. You won’t need to fertilize the plants the year they’re planted, but expect to do so in subsequent years. Do so during the spring for the best results.

Tiger lilies tend to die back to the bulb in preparation for the winter, so expect the plants to go dormant every autumn. Most day lily varieties are also dormant during the colder winter months, but there are a few evergreen varieties as well.

Prune lilies in the autumn using sterilized pruning tools. Once the plants are finished flowering for the winter, cut back the dry flower stems to keep the plants appearing neat next season. A tiger lily requires cutting back at the stalk, just below where the flowers cluster together. Leave the remainder of the stalk to encourage the leaves to store food inside the bulb for next season.

Older plants may require you to deadhead the blooms daily to allow the plants to produce new, healthy flowers. Hybrid varieties may deadhead themselves, while most plants produce multiple buds and blooms at once.

However, you don’t want to deadhead a tiger lily at the end of summer if you want to collect and replant its seeds. If you choose to gather and replant from the bulbils of your lily, you can either directly plant them into garden soil or refrigerate them for around a month before starting the seeds indoors using pots.

Tiger lilies tend to have fewer growing issues than day lilies, but they both can suffer from fungal diseases, mold, or root rot if watered too much. In addition, aphids are common pests, and can spread virus diseases that make foliage fleck or grow distorted.

Most of the problems iare prevented with adequate watering and drainage. You can also use homemade sprays to control or kill off pest infestations rather than using harmful chemicals.

Although both types of lilies are easy to grow, true tiger lilies only come in orange shades with dark-colored spots. Daylilies, on the other hand, come in a variety of hues, and are more drought-tolerant.

The best type for you may depend on your needs. If you live in zone 3, a drought-likely area, or want to grow flowers in containers, daylilies may be the best option. Tiger lilies, in contrast, produce blooms that last longer and return year after year.