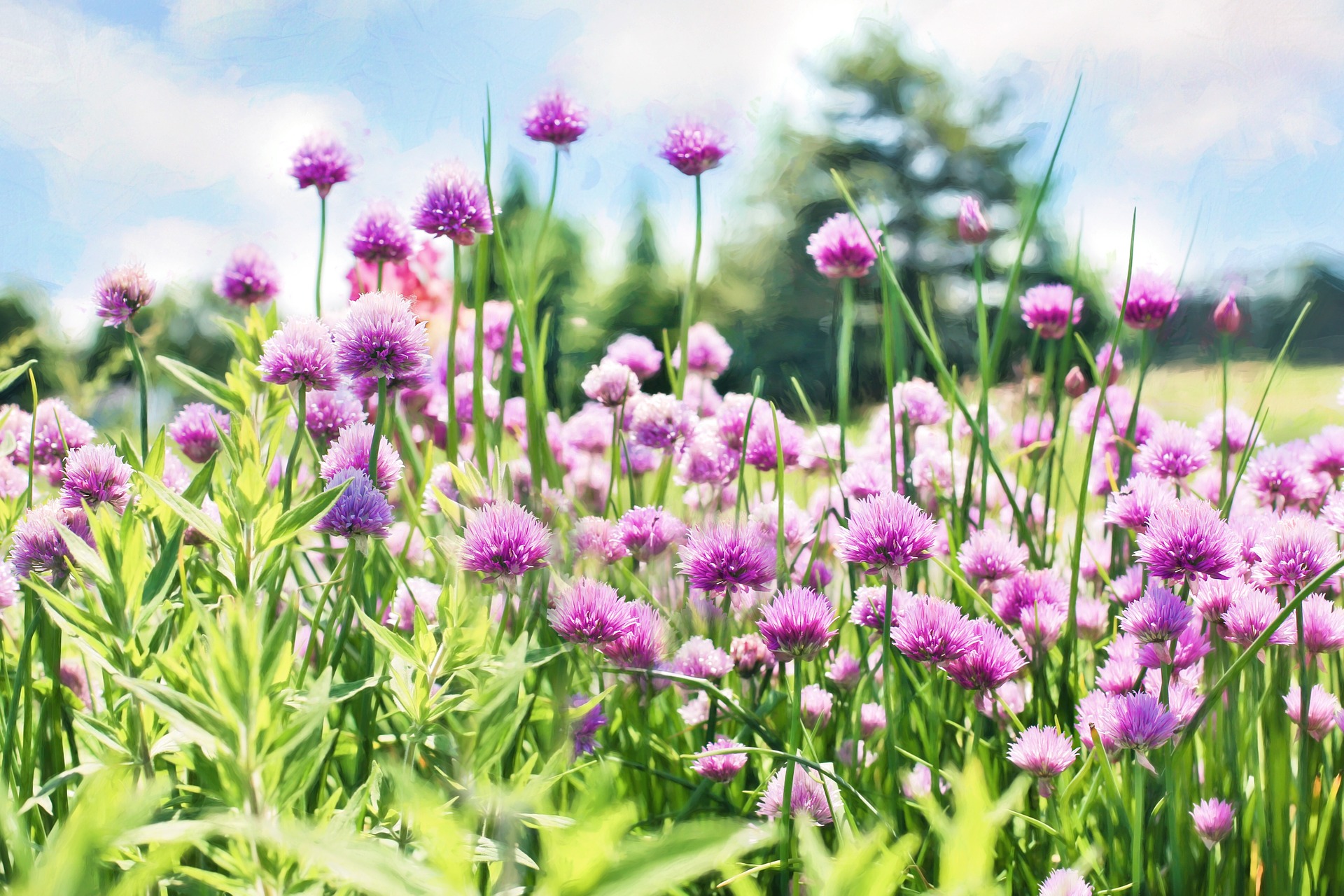 If you have a shady garden, or no garden at all and want to grow some herbs indoors, fear not—there are some exciting choices. Tender herbs that thrive in damper soil will grow admirably in darker locations without a lot of direct sunlight. We’ve put together a collection of useful culinary and soothing herbs that grow in the shade, so you have plenty of options to choose from.

People with shady yards often plant ornamentals or ground covers. It makes the garden look pretty, but if you opt for shade-loving herbs that produce beautiful flowers or have other eye-catching features, you can also experience the joy of harvesting plants for your kitchen or home apothecary.

In the gardening community, mint is known to take over garden beds and plots. This is a hardy plant, which can survive in most conditions, including shade.

Although used most commonly as a component for tea, mint is actually quite versatile. Try it in a summer fruit salad, or use it as a savory element in a spring pea soup. You can even create a mint pesto to serve with chicken.

There are also many varieties—like the well-known peppermint and spearmint—but there are also chocolate, pineapple, apple, and ginger mints. Have fun choosing your favorites.

Mint is the perfect choice for an indoor container garden, since it has a tendency to overpower other herbs if left to grow freely outdoors.

Parsley is loved the world over for its bright flavor. The whole plant can be eaten, including its roots. There are two varieties; flat-leaved Italian parsley, and the curly variety. Flat leaf is most commonly used to flavor food, whereas curly is mainly reserved as a garnish.

This is a cold-hardy herb, which means it can withstand more extreme temperatures. This makes it a great fit if you live in a colder climate. It’s also a good choice for containers—just make sure to keep the soil nice and damp.

Parsley will self-seed and grow again if allowed to flower and go to seed.

Cilantro is the green leafy part of the Coriandrum sativum plant, whose seeds are known as coriander. Some people have an aversion to cilantro and say it tastes like soap. Others adore it in Mexican, Thai, and Indian cuisines.

Partial shade maintains the taste and flavor of the herb and reduces bolting and bitter leaves.

It is very easy to grow cilantro from seeds, and like parsley, the entire plant can be consumed.

Chives are part of the onion family, but instead of the bulb being consumed, it’s the leaves that add a mild onion flavor to dishes. It’s wonderful paired with eggs (especially scrambled, or devilled), and potatoes.

These perennial herbs are beneficial to the digestive system. Both the long grass-like stems and the flowers are edible.

They self-seed, and are good pollinators, which means bees love them. Their purple flowers look pretty, which makes them a nice addition to an indoor container garden. For them to bloom regularly they require a few hours of direct sunlight daily.

Lemon balm, also known as Melissa, is a tender-leafed herb with, as you can guess from its name, a fresh citrus flavor.

It has long been used for its mild sedative properties, and also has culinary uses.  Try it as a tea or make a simple syrup with it, and use that as cocktail ingredient. You can even make a compound butter to be paired with chicken or fish dishes.

This herb is a perennial, and easy to grow in rich soil.

Thyme is a well-loved and time-honored perennial herb. It has a spicy woody flavor and is a great addition to meat and mushroom dishes.

It comes in a variety of bloom colors, from white to pink.  Although the blooms are pretty, it is not the best choice for an indoor garden. It spreads low to the ground and makes a nice ground cover beneath tree canopies, where it seeks shade.

Thyme stores very well after being dried, and can maintain its flavor for about 2 years.

Sweet woodruff produces little star-shaped flowers, which makes it one of the prettiest shade-loving herbs. It gets its name from its sweet-smelling leaves. Woodruff also tends to grow close to the ground, and like thyme, makes a beautiful ground cover.

This herb likes moist, but well-drained soil. Similar to mint, it can be an aggressive plant that takes over the garden, so it would do best in a larger shallow pot where it can spread.

Due to its vanilla-like flavor, it has traditionally been used to flavor cordials, candies, and desserts. Its strong scent also makes it an environmentally friendly mothball replacement. Create an herb pillow with sweet woodruff to have sweet dreams.

Dill is a well-known herb best used with seafood, potatoes, and eggs. It’s also used to make dill pickles. This herb is best used fresh, and has an aroma similar to anise.

Its leaves can also be used as a tasty, natural breath freshener. Since it has a soothing effect on the digestive system, it has historically been given to colicky babies in the form of dill water.

Plant seeds directly into the soil, instead of transplanting seedlings. In late summer, dill produces beautiful yellow blooms, which makes it another nice choice for an indoor garden. Be sure that your pot is taller than 12 inches, since dill grows from a long taproot, and keep the soil moist.

Collect the seeds to plant more next year.

Chervil, also known as “French Parsley” due to its appearance, has a mild anise flavor and is one of the fines herbes used to season delicate French dishes. The leaves themselves are delicate; therefore add them at the last minute to salads, sauces, omelets, and soups.

This herb is a rich source of bioflavinoids, and has a long-standing history in folk medicine for aiding the digestive system and reducing hiccups when infused in vinegar.

Plant chervil in a deep container, as it has a long taproot similar to dill. Slugs tend to like the plant, so growing it indoors is a good idea. The hot sun causes chervil plants to bolt and go to seed, so try to grow it in early spring or early fall. It thrives in cooler temperatures in wet soil and shade.

Tarragon has long, narrow leaves and an anise-like flavor. Like chervil, it is part of French cuisine’s fines herbes. Its leaves are best used fresh, but also freeze well.

Gargling with tarragon tea, or even just chewing the herb, is said to relieve mouth and tooth pain. It also helps with digestion.

This herb is a perennial that does best in a shady spot with well-drained soil, because it will wilt in high temperatures. Root division propagates it because its flowers are sterile.

Sorrel (Rumex acetosa) is a perennial herb with a sour flavor, and its tender leaves are delicious in salads and soups, or stewed with vegetables and meats. It is often used in conjunction with spinach, and is great with cream-based dishes and oily fish. If you’re looking for a non-alcoholic digestif after a heavy meal, make tea from the young leaves, as the herb aids digestion.

The word “sorrel” comes from the Germanic word “sur” and the old French word “surele,” both meaning “sour.” During the Middle Ages, before citrus fruit had reached Europe, sorrel was used to lend a lemony flavor to cooking.

Rich in vitamin C, sorrel was valued for centuries for its ability to prevent scurvy. However, people with arthritis or kidney stones should eat only small quantities of sorrel, as oxalic acid—which makes it taste tart—can aggravate these conditions.

Harvest the young leaves often and use them fresh. Sorrel is a frost-hardy plant and can often be seen growing in winter.

Black elderberries are delicious and often used in jams, cordials, and sweet sauces. They’re also commonly used in a syrup to support a healthy immune system.

The berries contain flavonoids called anthocyanins, which are high in antioxidants, and give the berries their blueish purple color. They’ve also been recorded to have a high oxygen radical absorption capacity (ORAC), which is the scale by which antioxidant activity is measured.

Elderberries fruit best when you plant at least two different varieties within 60 feet of each other for necessary cross-pollination. They grow best in moist, well-drained soil, and start producing when the plants are 2 to 3 years old. There is a short ripening period of 5 to 15 days from mid-August and mid-September.

Nettles have small, sharp hairs on their leaves and stems. Those hairs inject a mix of acetylcholine, formic acid, histamine, and serotonin, causing an itchy, burning rash in humans and other animals, which may last up to 12 hours. Please use caution and wear gloves when harvesting this plant. Soaking nettles in water or cooking them removes the stinging chemicals.

Although it requires special attention, you definitely want this plant close by as it’s good for so many things. When cooked, it tastes much like spinach and is often made into soup or tea. It’s rich in vitamins A and C, as well as iron, potassium, manganese, and calcium.

Nettles have been used for hundreds of years to help relieve painful muscles and joints, eczema, arthritis, gout, and anemia. It’s also good for allergies.

If you have children or pets, grow your nettles inside a fence both for obvious reasons, and because it tends to spread. It likes damp soil and partial shade.

Since there are so many different herbs that grow in the shade, you’re certain to find a few that best suit your garden space. Most of the ones mentioned here have medicinal as well as culinary uses, so they’re well suited to food gardeners and herbalists alike.Whether you’re growing indoors or outside, in a container or right in the earth, there are beautiful plants to choose from.